No Artist Can Pick His Fans

David Cook, the closest thing to an artist ever produced by American Idol, is trying to move beyond that show's limiting brand. But his fans certainly aren't. 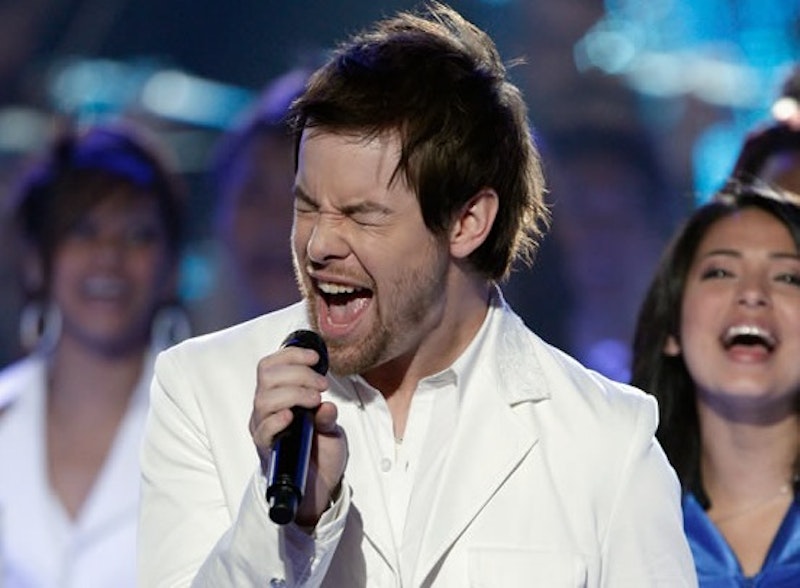 I imagine David Cook is counting down the weeks until someone else becomes The Next American Idol. Every winner must feel at least a little conflicted about Simon Fuller's Faustian bargain, but this seems especially true of Cook. He's the closest thing the show has had to an artist, crafting some nice original arrangements—notably a strings-and-cigarette-lighter twist on Mariah Carey's "Always Be My Baby"—and boasting the background of an authentic bar-hopping wannabe.

To combat Idolization, then, Cook has made several savvy moves. For his first solo tour, which is wrapping up now, he decided to play a run of affordable college shows and signed a promotional deal with mtvU. Cook's fans could easily support a small stadium tour, and his choice signals a clever attempt at rebranding. Sure, he had to play Good Morning America to mark the opening of Disney's "The American Idol Experience," but Cook also knew that, in a few short days, he'd be rawking for intimate audiences at the University of Northern Iowa and Valparaiso U.

So this explains how I found myself, on Good Friday at 11 a.m., a full hour before tickets were to go on sale, waiting on line for David Cook. (The tickets were for my wife and her friend, neither of whom could get off work, but no matter.) Turns out I was the first one there, but barely.

I heard the second person before I saw her—or rather, heard the tinny blast of her cell phone ringer, which was Cook's latest single, "Come Back to Me." She was a fit, mid-40s woman in a dark gray David Cook t-shirt. In addition to the shirt, this woman—let's call her "Brenda"—wore elegant high-waisted jeans, a black belt (the kind made of braided leather), blue socks and blue Crocs, reading glasses, and a short, hassle-free haircut. After double-checking the details at the ticket counter, Brenda sat down and answered her phone. It was 11:08.

To be fair, I was looking pretty pigeon-holed myself—tight jeans, Converses, a book by Norman Mailer—but Brenda's devotion to Cook frightened me. Her phone call was from another Cook fan, also an older woman, and they began chatting about the Internet. "That's david-dash-cook-dot-org," said Brenda. "It was there way before davidcookofficial-dot-com and I like it better." Apparently, Cook's corporate site needs a good moderator: "I put a topic on there about his legs," said Brenda, "because someone else had something about his arms, but they already had one of those! Lisa emailed me and said 'You made a duplicate.'"

While I tried to shake the feeling that the world was collectively pranking me, Brenda and her friend continued. They believed Cook reads his fans' posts, official and otherwise, and thus had been trying to set him up. "I know a girl that'd be perfect for David," Brenda promised. "He can't be alone for the rest of his life." A pause: "Of course, I'd like him for myself, but I'm too old." (From the phone: "Me too, me too.") I'd think Brenda was crazy if she wasn't so pragmatic: "He won't read just anything. If you put a catchy title—if you use the right words, he's likely to read it. But it has to be short."

I should have been prepared for this. After Cook won American Idol, the AP crunched the Nielsens and pounded the pavement in search of "Cougars 4 Cook." If they lack a label as enduring as "Claymates," the group still delivered Cook a sizeable win and a devoted constituency. (But note that the numbers from Idol's current season suggest its audience is continuing to age, even without Cook—correlation and causation and all that.)

Still, it's the Cougars' current influence that should worry Cook. For example, tickets for his March 31 show at Southern Connecticut State University cost students $2. After a quick sellout, they began cropping up on eBay and craigslist for more than $100 a piece. We'll never know the median age of the SCSU gig because Cook had to cancel it, reportedly to spend time with his brother, who's battling cancer. In fact, the only reason I had a chance at tickets is because Cook quickly scheduled a makeup date at the nearby Toad's Place, a venerable 750-seat dive that normally hosts cover bands (Age Against the Machine), indie iconoclasts (Of Montreal), and groups who've opted to fade away (The Presidents of the United States of America).

Still, word got out. A second woman arrived at Toad's at 11:24, or about the time their office phones started ringing incessantly. This woman ("Sherry"?) looked the same age as Brenda, though she had probably squeezed more living into that span. Sherry had over-bleached hair, a leopard-print purse, and jeans with her initials sequined across the back pockets. (A Bedazzler was almost certainly to blame.)

The women struck up a conversation. Both had already seen Cook multiple times. They loved the American Idol tour, but agreed that it couldn't compare to seeing Cook with his band.

Brenda started her david-dash-cook-dot-org pitch, but Sherry interrupted to say she heard about the show through Toad's. "I have a connection," Sherry admitted. "My husband used to play here." By now, another woman, a thirtysomething African-American with an enormous light-blue leather purse, had arrived, and she added that the concert "was on KC101." "Oh, I don't listen to the radio," Brenda replied. "I'm old. But he's done something to me. I'm 17 again."

It's fitting that, shortly after this comment, someone who appeared to be an actual 17-year-old walked in, looking to buy Conor Oberst tickets (and to remind us that no artist gets to pick his fans). She sported short pigtails, skinny jeans, a bright flannel shirt, and moccasins. Brenda approached.

"Do you want David Cook tickets?"

"What kind of music is it?"

"Probably not. I'm here for Conor Oberst. The tickets go on sale at noon."

When noon arrived, there were nine people on line—more than any of the incredulous Toad's employees could remember seeing before. I walked up to the counter and said "Two for Of Montreal." The clerk rolled his eyes, looked hurt. I bought two David Cook tickets and headed out into the sunshine.