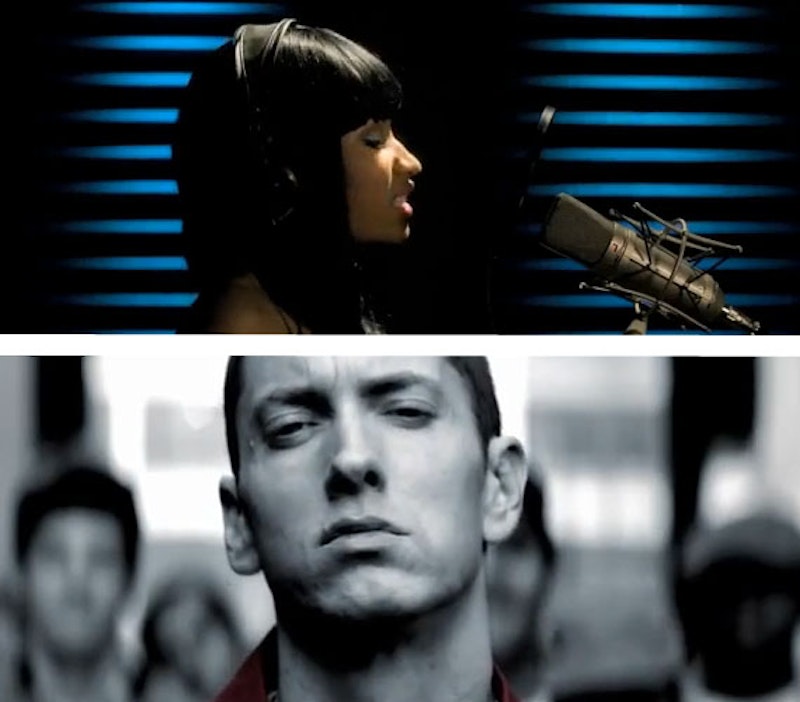 Eminem was rapping on “Roman’s Revenge” during my first few bouts with the song, but I didn’t quite hear anything he said until the fourth or fifth spin. What jumped out at me at first, really, was how he said what he said, the rabid, unhinged rancor of his delivery, as though the Marshall Mathers we’d come to know lately—the on-the-wagon, off-his-game lucky loser Mathers of 2009’s missed-mark Relapse and this year’s mixed-bag, R&B-diluted Recovery—was suddenly no more, spurred by critical stage whispers to shed his Bruce Banner façade for the bare-chested, torn purple jeans of steroidal alter-ego the Incredible Hulk. Em’s first verse hasn’t ended before he’s unleashed a ferocious scream, signaling what might be a triumphant comeback salvo, locking into the rough, rapid-fire flow of a lyrical serial killer and carving through metaphorical victims like a master butcher returning home high from a Jackass 3D screening, reclaiming the horror core and potty-puke terrain he roamed like a lion a decade back as though he'd never relinquished it. Until now, “Almost Famous” (from Recovery) was the closest he’d come to an unimpeachable late-era return to fighting trim; “Revenge” blows that song’s sell-by-dated Ben Roethlisberger/David Carradine quips away with fluidly vivid, misogynistic expressions of maliciousness that aren’t as time-sensitive as they are off-the-chain bristling.

“Revenge” truly belongs to Nicki Minaj in every sense; the song appears on her forthcoming Pink Friday, showcases her Tourettes-inflected, possibly-bipolar personae nicely, and proves that her crazy-pants Rain Man guest tear on “Monster”—Kanye West’s event-rap spectacle—was no fluke. Gruff, tough, and linguistically acrobatic, Minaj can match Shady blow for blow, wha? for wha?: veering into tangential, assaultive abstractions, disparaging imaginary haters like a paranoid schizophrenic, playing the “is this the thanks I get?” card like she was the female Dr. Dre, bizarrely shouting out Eli Manning just for kicks—something barely anyone ever does. Also, “Revenge” is definitely the first time I’ve heard a female rapper drop the C-bomb, let alone in a self-referential way, which must - like the idea that a female rapper can compel and beguile as a comically psychotic dervish instead of presenting herself first and foremost as a preening sexpot - represent some sort of progress. (Remember when everyone was calling Lady Sovereign “Feminem”? No, me neither.)

And while both rappers are captivating presences, energized, electrified, downright livid—the sinister “rah, rah, like a dungeon dragon” chorus chant simultaneously signally a throwback homage/nod to rap’s formative era and subbing as a neat shorthand for the hunger for pop-chart credibility Slim and Minaj are feeling. Producer Swizz Beats deserves some of the credit for the backdrop of pummeling, jackhammer synths and keyboard hiccups he drapes behind this pair as they breathlessly transform themselves into the rampaging elephants in mainstream hip-hop’s gilded anteroom—sorry Kanye, sorry Weezy—if only briefly, for a couple fleeting cultural milliseconds.