One part of the Emeralds, and Cleveland underground fav, releases a deeply personal new album. 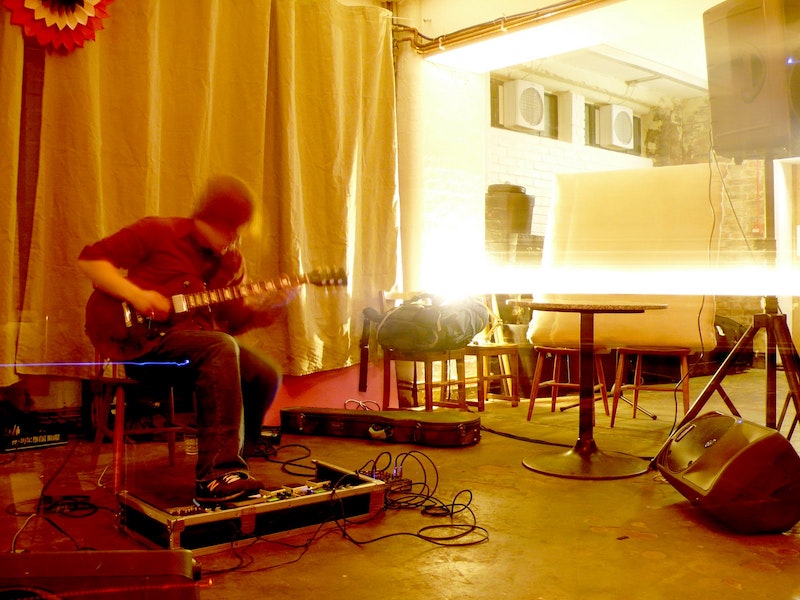 Ambient guitarist Mark McGuire releases dozens of cassettes and CD-Rs each year, but he's calling Living With Yourself his “first record.” Though his basic approach to composition (endless loops of super-clean guitar that build to a cathartic though not exactly epic climax) hasn't changed much, this is his first release on an above ground label (Austrian noise/electronic behemoth Editions Mego) and this time around, he's wrapped his wandering instrumentals around a brilliant, very touching conceit.

Living With Yourself is about experience, and the way in which the building-up, inevitable breaking down, and occasional rebuilding of relationships permanently alters the lives of everyone involved, whether they like it or not. McGuire investigates this through contemplative guitar work adorned with cryptic, pointed references to family, friends, and lovers: proper nouns in the song titles, the family photos on the album cover, the audio from home movies that preface the first and last track.

“Brainstorm (For Erin)” plucks along and suddenly, longingly explodes with a wailing guitar solo worthy of a Michael Mann movie climax and it's viscerally exciting, but also—who's Erin? It's strangely affecting. The next two songs, “Moving Apart” and “Two Different People” suggest a break-up story and both tracks' slowly dissolving globs of feedback certainly give off the feeling of dissolution but it's still too insular to know the whole story. And that seems to be the point. The final track, a 10-minute epic titled “Brothers (For Matt)” begins with audio of McGuire's dad mock-interviewing Mark and brother Matt as children, and casually builds to a rumbling, Explosions In The Sky-like burst of wizened joy. It as awesome and moving as post-rock can conceivably be in 2010 and maybe even reinvents the grotesque clichés of that once-thrilling genre because McGuire's such a fragile, purposeful guitar player and “Brothers (For Matt)” is the final, touching dedication on an album full of such things.

From these deeply personal but universal scraps of context and McGuire's comfortable but searching guitar tone, it's easy to surmise that the guy had a conventionally “ideal” upbringing. That's also what makes the emotions on Living With Yourself so interesting. Art that wrestles with the past usually involves personal trauma narratives or anxiety of influence pontification, but McGuire isn't concerned with such things. Yet, there's no suburban guilt or indie rock white boy whining here either. McGuire's simply stuck pondering the strange, lasting impact of his memories, or, as he calls it (via Proust), on the rousing, opening track, “The Vast Structure Of Recollection.” Your first girlfriend will always remember you. Your parents never forget the Ninja Turtles sheets on your bed when you were six years old. You used to have long hair and it looked really silly. That may sound preciously existential and a bit obvious, but that's the charm of Living With Yourself—it's so damned earnest.