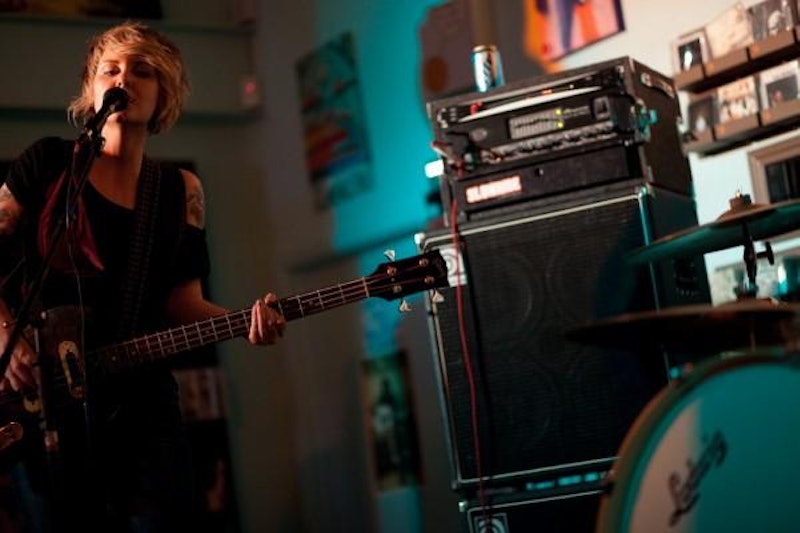 True Widow sway and swagger with the candor of a strung-out bum. The self-described “stonergaze” three-piece from Dallas makes music that sounds exactly like that: the heft and distorted, monotonous throb of Sleep, Earth, and Om, and the sun-damaged haze of My Bloody Valentine. Their songs move like slow death marches, a band of P.O.W.’s about to walk the plank. It’s stoic, but with the sarcasm and bitterness of someone who’s about to die and will not let it break them. To spit on the shoes of your executioner. True Widow’s latest LP, As High as the Highest Heavens and from the Center of the Circumference of the Earth (don’t jump ship yet), has a mammoth, imposing sound that beats you down through attrition rather than pure attack. These songs drain; they belch, breathe, wheeze, and stagger forward.

Few new bands seem to understand the importance of guitar tone, or the practically limitless sonic potential the electric guitar has. The prevalence of samplers and audio interfaces has made it almost passé to make an effort to master your instrument—why spend four hours a day playing scales when you can just download a patch for Logic? That being said, ASATHHAFTCOTCOTE (what a sick acronym…that should have been the name) sounds like it emerged from a swamp in the forest, pissed off and hungover. The guitar and bass boom and crackle like speakers on the verge of giving out, but the throb is rarely unintelligible like with so many drone and guitar wizard wannabes—the progressions and the patterns mean something, they say something beyond LOUD NOISE. This record is expertly mixed—every piece can be picked out amongst the thick, gooey gumbo—music that sinks in your gut and makes you feel full.

True Widow "As High As The Highest Heavens..." from Justin Wilson on Vimeo.

I’m usually wary of bands that use breathy, “ethereal” vocals in the Loveless vein; so often that approach is used by people as a mask to hide their laziness or poor writing. Pretty, wordless vocals were perfected on Loveless and rarely does anyone deign to do anything new with it. A vocal line here and there on this record work wonderfully, but mostly they’re nothing new; basically instrumental flourishes. It’s a route a lot of musicians take because they can’t write smart lyrics, but I’m not as suspicious of True Widow’s ability, or their intentions. While their music draws heavily on stoner metal flagships of the past, True Widow aren’t playing dress up, and they certainly know how to make a record properly, which is more than I can say for most new bands. I mean, this is a deep, sonic record—every piece of the mix sings. The drums sound massive and atmospheric, a far cry from the super-compressed flatness of most modern rock and pop songs. It remains to be seen if they’ll grow out of the shadow of their influences, but for now, they’re making a statement: doom and gloom only grow in time.