Mendelssohn’s conservatism seems completely at odds with both this innate talent and his cosmopolitan existence. 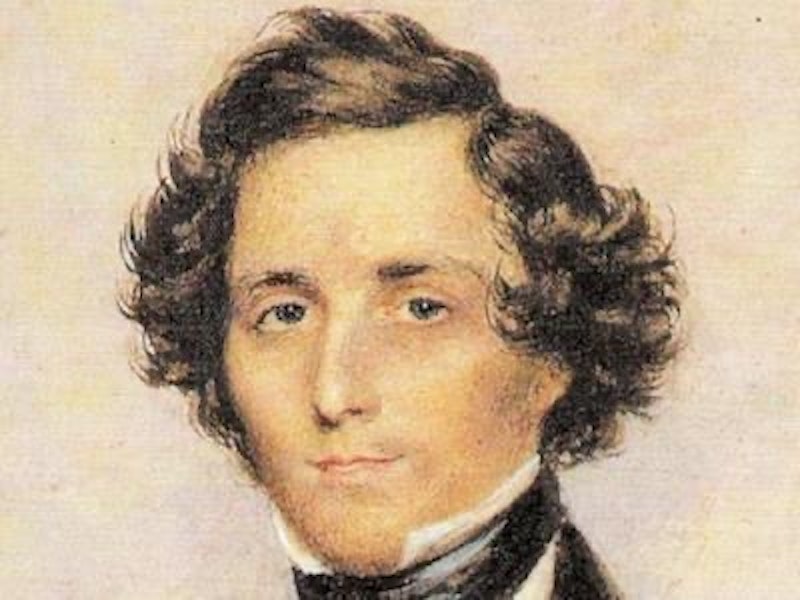 I’m trying to give you an idea what it feels like to listen to Mendelssohn, one of my favorite composers. Mendelssohn is German and Jewish (under a Roman Catholic veneer), and was “recognized early on as a musical prodigy.” I’m listening to him right now, as interpreted by Sir Neville Marriner, who has one of the lightest touches of any conductor who doesn’t just flatten the music down to its niceties.

I’m listening to the Italian Symphony, which is a bit more generic than its Scottish brother; there are more grand flourishes, more drum rolls, and more proud assertions of aristocratic joy. It’s certainly far from “Italian,” just as Symphony #3 is far from “Scottish,” but you can hear what Mendelssohn was trying for: pomp and circumstance, Italian-style. It reminds me of where I’ve just been, an Indian casino in Connecticut, where I went to celebrate my birthday. In an essay on television, David Foster Wallace wrote that people are divided by what brings them the most pain, and united by their lowest pleasures. It certainly feels that way in a casino. There’s a cigar lounge for cigar smokers like me; there are low-cut dresses; there are games where you can win money, and brag about it, just like everybody who wins money that way.

And just like Wallace, Mendelssohn wants to be something he’s not, starting with his family’s decision to re-christen him as non-Jewish. After all, he never wrote a single “German” symphony; it would’ve been impossible for him. Mendelssohn wants to a man of the people, broad and accessible, hummable and consistently on point. His music is full of sunshine and grace, and it’s enduringly popular, which is fine in and of itself. But what is sunshine, really? It’s light from an alien star; it reaches us after disregarding our atmosphere almost totally, indifferent as well to the distances it goes. Casinos are completely dark, meanwhile, except for 1000 lights that burn upward towards their vaulted ceilings. It’s never day or night inside them. The sun is merely a rumor there, weakly retold, so that its absence is never worrisome.

What Mendelssohn can never hide from his listener, and what ruins the good German cheerfulness of his music, is the svelte and unmistakable melodic line that streaks across his broader strokes like a glowing thread, introducing an eerie quality of winsome beauty that has little, if anything, to do with his stated purposes. This beauty is something unearned and untellable. Significantly, Mendelssohn wrote that the music he composed “expresses thoughts that are not too indefinite for me to put into words, but on the contrary, too definite.” The ethereal quality in his music speaks to this otherworldly certainty that he never failed to possess. It comes from being born into the world with the vocation to create, along with the vocations to have a family and get along with the world that we all inherit.

The fact of Mendelssohn’s conservatism seems completely at odds with both this innate talent and his cosmopolitan existence. How is it possible, one wonders, that such a man could maintain both an unwavering dedication to Bach’s sometimes underrated compositions, and a hostile, contemptuous attitude towards Berlioz? Doesn’t the “radicalism” of reviving Bach’s Mass find common cause with the radicalism of Liszt’s experimental flurries of notes? Not for Mendelssohn or people like him—on the contrary, Liszt’s disregard for tradition struck Mendelssohn as a misunderstanding, the exact misunderstanding of music’s power and majesty that he sensed in everyone who appreciated music without being able to produce it. The irony of Mendelssohn’s existence was that the more he produced music according to popular tastes, the more people celebrated him as a man apart, a virtuoso—which is, in fact, precisely what he was. He is separated from the crowd by his success; the life of Berlioz, who broke with his family precisely in order to compose, would have made no sense to Mendelssohn, and would have appeared to be the desperate behavior of a pretender. Mendelssohn is the bright boy who grew up pleasing everyone with his abilities, and who tries to put those abilities to good use for the rest of his life, even as they carry him further and further out to sea. His only great choral composition, Elijah, includes the resurrection of a young boy. It was, for Mendelssohn, the quintessential image of what he hoped art could do: bring back the sublime happiness he felt as a young child, when his prodigy was pure joy for both himself and those he loved, instead of an albatross.

But the sunlight of genius is a natural predilection, and has its nocturnal aspect as well; much remains permanently in shadow to a person who’s forever chasing bright-winged butterflies through meadows of pure imagination. Above all, the disorderly, anarchic nature of lived experience seems like some kind of tragic accident, perpetually on the verge of being resolved, and this desire—for the world to be as logical as a musical theme—leads the artist on like a pied piper, seducing him into insincerity and worse. His “Wedding March,” which we usually hear by itself, but which is really part of A Midsummer Night’s Dream, is a pompous blast of conventional celebration in the middle of a play about the fickleness of love.

Mendelssohn cannot really understand Shakespeare because, like his predecessor Mozart, he never mistrusts his desires. Towards the end of his life, Mendelssohn was poetizing female acquaintance Jenny Lind as one of the mythical Rhine maidens, urging her to elope with him, and writing music for her that (by definition, since these works were “forbidden” at their core) he could never finish. Lind was not his real muse; his muse was the ordinary person he could imagine but never be. Lind was the symbol of a different life that (he vainly imagined) would more nearly approximate his genius. Lind is the hopeless attempt prophets like Mendelssohn make to cash out.

The casino was playing Buddy Holly on a loop in the bathrooms this week, because he was slated to appear (in the form of a hologram) in the concert arena. “All of my love, all of my kissin’,” Holly sang, “you don’t know what you’ve been a-missin’.” When I first heard him sing that, as a love-starved teen, I thought he was offering his love and kisses to somebody haughty. Now I realized he was apologizing for gifts that aren’t his to give away, though he spent his whole life in the attempt. The hologram is a fitting tribute. You can put your hand right through Buddy Holly, and wave it back and forth; he simply isn’t there.