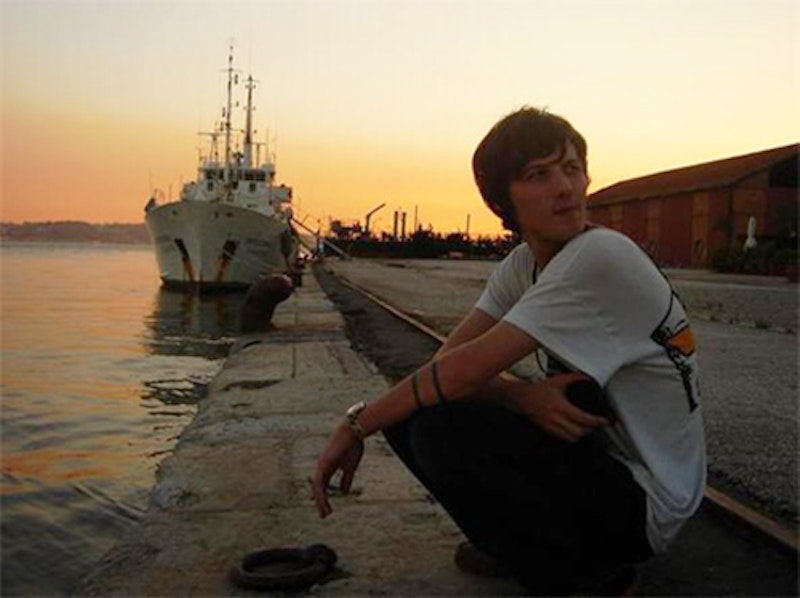 Lockett Pundt slings melodies like an eccentric yo-yo champion—establishing sticky motifs then flailing off into the ether before fumbling back to square one from a number of different directions. Usually, there are generous helpings of echo and reverberation to ease things along. To submit to a Lotus Plaza composition is to accept that you're likely to get really lost before you're found again, but the voyage is always worth the trouble. While LPs The Floodlight Collective and Spooky Action at a Distance grounded Pundt's songcraft in psych-rock strictures—replete with verses, chorus, and vocalese—his interstitial singles and EPs are traditionally more open-ended in nature. The Overnight Motorcycle Music cassette (Geographic North) finds the Deerhunter member at his way-gone best.

The guitar is Pundt's métier here, and he seems intent on exploring and exploiting the instrument's myriad possibilities. Side A, "Indian Paintbrush," is the longer of the two compositions, and can often feel like the sonic equivalent of attempting to sip from a gushing natural spring. His fingers hopscotch up and down the strings in a mild assault of notes bright and dim alike, a one-man duet of sorts. It put me in mind of a school piano recital where the anticipated drive to achieve technical proficiency gives way to something muddier and more dissonantly avant-garde as the denouement comes into view. The magic lies in the way Pundt glides very, very gradually into this new approach over 14 minutes, with stark optimism shading almost imperceptibly into fuzzy self-doubt.

For Side B, "Gemini," the guitar is transformed into a glacial-tempo string section sans conductor, with multiple drones layered in manners exquisitely dreamy, unbearably torturous, and, at moments, entirely exhausting. This is not a movement for anyone suffering from severe mood swings, especially on the far end, where Pundt opts to occasionally stutter the proceedings and arc his shape-shifting dins in imitation smoke from candle wicks snuffed rudely. One could beg the question of the relationships the titles bear to the works, but the answers would seem superfluous to the effects. A bigger question, perhaps, might be why so many directors are routinely cozying up to Jonny Greenwood and Trent Reznor for film scores when Pundt's services are available and evolving intriguingly.