Low-fi hero John Darnielle offered up the back story on his introspective lyrics at a recent show. From The Diamondback. 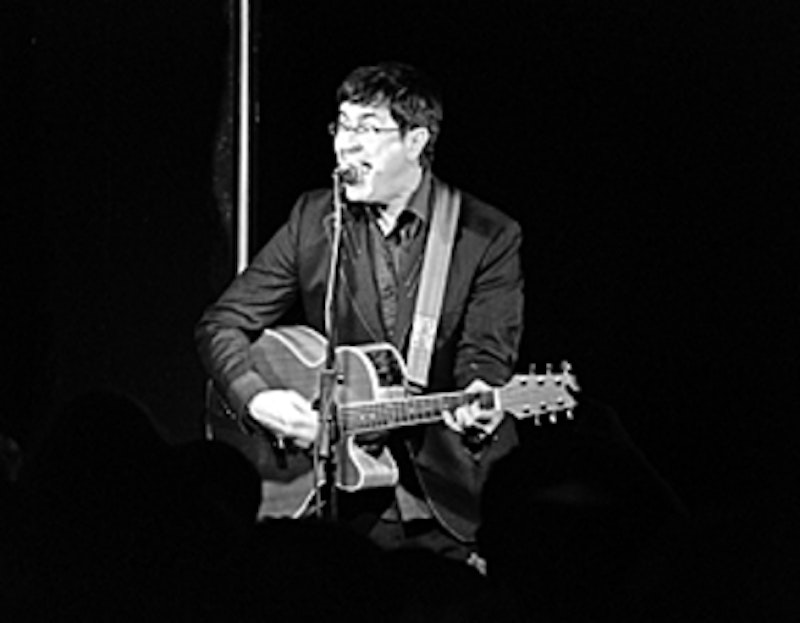 John Darnielle is one strange, wonderful man - who else could harp on the wonders of YouTube, Tang, Mr. Rogers, Jedi mind tricks and a yellow Volkswagen bug (as a metaphor for a previous lover sleeping with someone else; somehow, it made sense at the time) all during one set? At the Black Cat in Washington Saturday night, Darnielle name-dropped and more, delivering nearly 20 songs and two encores with his band The Mountain Goats and fully living up to the title of "America's best non-hip-hop lyricist," as The New Yorker dubbed him in 2005.

Doors for the show were at 9 p.m., but by 7:30 p.m., an awkward mess of under-21-year-olds - accompanied by their uncomfortable, sore-thumb parents - had formed a healthy line that curled around the first floor of the Black Cat. Saturday night's hipster outfit of choice? The "Juno," with countless girls wearing ill-fitting plaid skirts and minidresses over baggy blue jeans. Thanks a lot, Ellen Page.

After a lackluster set by opening act The Moaners - which prompted The Diamondback's photo editor Adam Fried to remark, "I don't even think they could be less interested" - The Mountain Goats finally took the stage a little before 11 p.m. Darnielle, along with bandmates Peter Hughes on bass and Jon Wurster on drums, came out in suits - classy - and immediately burst into "Michael Myers Resplendent," a track off of the band's latest album, Heretic Pride.

With barely a pause, The Mountain Goats then began playing the album's title track; after nearly 30 seconds of poor sound quality, however, Darnielle wasn't feeling it. "Let's just start over; it's early yet, right?" Darnielle asked the crowd, before restarting the song.

His ease with the audience - evident in this interaction and other stream-of-consciousness soliloquies that resulted in quotes like "My rhythm section ate all other indie-rock rhythm sections for breakfast and said it tasted good" - only helped make good songs great. With his halting, stuttering style of speech and random-yet-brilliant asides, Darnielle is reminiscent to the late, great Mitch Hedberg, but with a musical bent.

At one point, Darnielle espoused on the "Darnielle/Vanderslice ticket," mentioning how he and fellow indie rocker John Vanderslice (a musician and co-producer of Heretic Pride; appearing this Friday at the 9:30 Club with Stephen Malkmus and The Jicks) "don't know jack" about being politicians, which makes them the perfect candidates.

To cheers and applause, Darnielle then launched into "Wild Sage," and indulged the audience in a sing-along: "And when somebody asks if I'm OK/ I don't know what to say/ And along the highway/ From cast-off innumerable seeds/ Wild sage growing in the weeds."

Songs veered between measured frenzy and slow, melodic, anecdotal forays into memory (Darnielle has said all songs written before and including those on the 2002 album Tallahassee are fictional, while the songs on the albums released since then, We Shall All Be Healed, The Sunset Tree, Get Lonely and Heretic Pride, are autobiographical). All were engaging; none were dull.

During the more than 90-minute set, Darnielle had time to describe the origins of emo (the genre didn't always mean "you were sad, or spent all your money on hair-care products") before burning through "Autoclave;" getting all deep with "Elijah" and "Blueberry Frost" (the latter's lyrics, "When you said your name out loud/ Something broke inside me/ Nothing new to take ahold of/ No new world to hide me," are beautiful in their cavalier honesty); and descending into a chaotic sprawl of sound with "In the Craters on the Moon."

A sped-up version of "Dilaudid" was another highlight; The Mountain Goats shed the song's original folk version and leaned heavy on the rock as Darnielle sang, "All the chickens come on home to roost/ Plump bodies blotting out the sky/ You know it breaks my heart in half, in half/ When I see them trying to fly/ 'Cuz you just can't do things your body wasn't meant to."

But the most enjoyable moments of the set came at its final moments, during The Mountain Goats' two encores. Despite constant yells for "The Best Ever Death Metal Band in Denton," a tongue-in-cheek song with the lyrics "Hail! Hail!/ Hail Satan!," the band instead performed "Lovecraft in Brooklyn," "So Desperate" and "This Year," the last of which drew cheers for its chorus of "I am gonna make it through this year if it kills me" (check YouTube for the absurd-but-fitting music video).

And the second encore - brought on by 10 minutes of solid cheering by a sold-out crowd not quite ready to leave - featured "Palmcorder Yajna" and "California Song." The second, from the band's 1995 album Sweden, drew the largest fan reaction of the night; as Darnielle sang the song's closing line, "You really got a hold on me," with his arms outstretched toward the crowd, the place went batshit. Ditto, Darnielle - you've got a healthy chunk of our hearts, too.