The Four Tops' frontman was one of the great soulmen of the 60s and 70s, and a model Detroit booster as well. 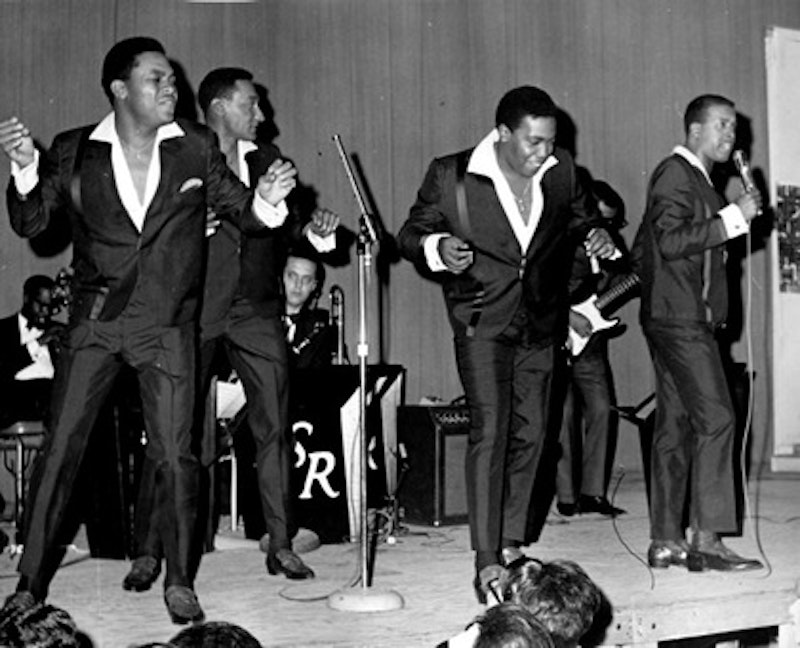 Stubbs, far right, in concert with the Four Tops in 1967.

All of three of the superstar male vocal groups at Motown had a charismatic, supremely talented lead singer. So how come Levi Stubbs never gained the notoriety that peers Smokey Robinson of The Miracles and David Ruffin of The Temptations enjoyed? Stubbs passed away at the age of 72 last week in Detroit, after a long battle with cancer, robbing the world of another soulful singer, whose gravelly baritone propelled The Four Tops to the top of the charts again and again.

Maybe it was Stubbs’ humility that prevented him from taking the spotlight. During the long run of hits he, Lawrence Payton, Renaldo “Obie” Benson and Abdul “Duke” Fakir churned out for Motown in the 1960s and 70s, they all stood shoulder to shoulder. Motown founder Berry Gordy wrote in a statement, Stubbs “could easily have made it as a solo star, but his love and loyalty” kept the Four Tops “together longer than any group I know. His character and integrity were impeccable.”

The Four Tops were together for 44 years, and Stubbs sang lead on every single one of their 12 chart-topping hits. But make no mistake; The Four Tops were not a Motown invention. The group was founded in 1953 by Stubbs, a cousin to Jackie Wilson, and his friends as a jazz quartet in a Detroit High School. Originally The Four Aims, the group became The Four Tops after a year, went from backing up Jazz musicians like Count Basie to singing R&B, and never looked back, recording for Chess, Red Top and Riverside before hooking up with America’s hottest hit-making machine.

Songs like, “Reach Out (I’ll Be There),” “Bernadette,” and “Standing In The Shadows of Love” became ubiquitous classics on the strength of Stubbs’ urgent shouts and anguished cries. Always tough, but tastefully restrained, Stubbs’ vocals prompted Temptations singer Otis Williams to tell Levi “you are our black Frank Sinatra” for his ability to turn a phrase just as beautifully.

The ace songwriting team of Holland-Dozier-Holland penned all of The Four Tops big hits of the Sixties, but their departure from Motown in 1968, while a turning point for the label, couldn’t keep the Tops off the charts. With other producers they had hits like “Still Water” and “River Deep, Mountain High.” And when Motown left Detroit for Los Angeles in 1972, the Tops refused to leave their native city behind. The Tops’ loyalty would be rewarded with a string of hits for ABC-Dunhill throughout the 70s and 80s, including the hit theme for Shaft in Africa, “Are You Man Enough.” All in all, they had 45 top 100 singles between 1964 and 1988, and the original members performed up to 200 times a year well into the 90s.

Besides being kings of Detroit, The Four Tops were also Motown’s most popular act in The UK, where Stubbs is rightfully considered one of America’s greatest soul singers, alongside other transatlantic stars like James Brown and Sam Cooke. Revered as a live act as well, the Four Tops constantly stole the show during star-studded Motown Revues with their carefully crafted moves and creamy harmonies really stood out against Stubbs’ gritty soul shouting.

And though he never released a solo album, Stubbs had his moment in the Hollywood, voicing the man-eating plant Audrey II in Little Shop of Horrors, and singing the memorable “Mean Green Mother From Outer Space.”

Unfortunately, all but one of the Four Tops has fallen to cancer in the last 15 years, with Abdul “Duke” Fakir the lone survivor. Stubbs is survived by his wife of 48 years, Clineice, five children, and 11 grandchildren. With his passing, we’ve lost another one of the legends that shaped soul music. Even if he wasn’t Detroit’s biggest star, Stubbs was one of its greatest citizens, and he’ll be missed.