In a post-ironic world, is there any point in competing over musical taste? 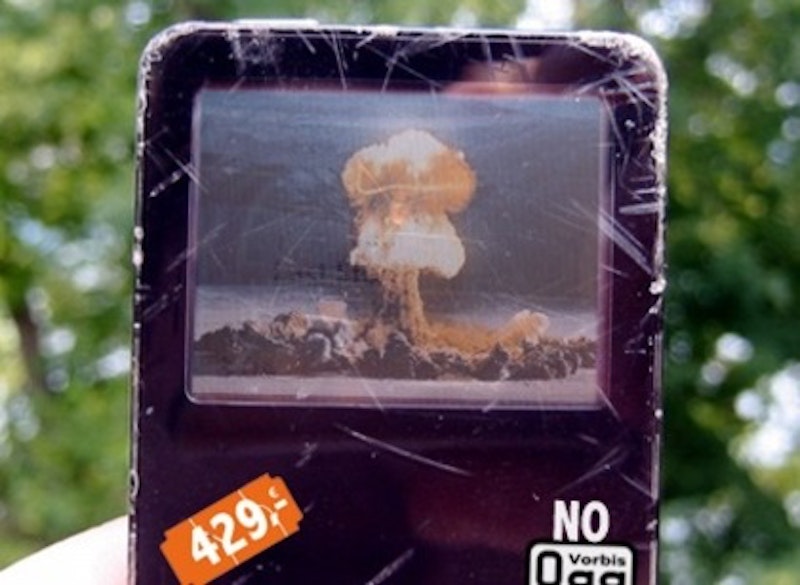 A few weeks ago I bought a brand new turntable. I paid $89 for it, which is at least a little funny given that it’s a silly and outdated piece of technology. Its manufacturers put it together out of plastic in China, and it has none of the charm of a gramophone or even a clunky hi-fi record player from the 70s. Its anonymous black plastic shell conceals a cheap rubber-band heart—the rotation relies entirely on a flimsy latex belt. In the package with it I found an adapter for an audio minijack, the familiar silver prong that headphones use. This lets you connect it to, for instance, an iPod dock speaker system. I have done this, and I see the irony although it moves me neither to laughter nor to tears. I had a similar turntable in high school in the 1990s—both it and my current model are automatic. The user pushes a button and the needle finds the record on its own.

The Princeton Record Exchange, one of the relatively few remaining independent music stores (and certainly the only one in Princeton) sells a huge number of LPs for a dollar a piece. Some of these are treasure; I got Billie Holiday and Duke Ellington at Carnegie Hall, some classics from the amazing Swedish tenor Jussi Björling, and a crisp performance of the Brandenburg Concerto No. 6 for a dollar each. I also got some horrible interstitial theater music from 1920s Berlin and a putrid English language version of the Threepenny Opera. A song costs $1 on iTunes, and these LPs, most of which were at least as old as I am, went for the same price. Each flat cardboard sleeve brought a double consumer thrill—it was so cheap, and it might be an amazing piece of music! I felt like I was getting an unbelievable bargain, despite the fact that I had just spent $89 on a turntable and that much of what I bought was valued much too highly at a dollar. Some culture theorists suggest that we buy consumer goods mostly for the experience of opening them. Long ago some metropolitan area weirdo opened all of these records, but I could open them again and the turntable would soon tell me what was in them—they were a series of $1 presents.

A few days later I went back to the record exchange with my friend S. She asked why I wanted to go to the record store. I told her that I had just bought a turntable and was itching to get my hands on some new LPs. “But Ari,” she said, “you don’t even listen to any cool music!” I can’t dispute this. I like harpsichord music and Nick Cave, and according to iTunes I’ve listened to Duffy’s “Mercy” 15 times (not counting when it has accompanied my daily bicycle ride on my iPod). S’s tone was teasing and the remark was empirically true but it stung me nonetheless. I am 27 and I don’t listen to any cool music any more. Maybe I never did. I’ve had the same Underworld CD (Second Toughest in the Infants) in my car since 1996, and all I do now is buy discounted classical music. The most cutting-edge music I have is the Garden State soundtrack, and I know from Aziz Ansari’s show at the UCB Theater that the clerks at Other Music will actually kill you for mentioning it.

But this is really what bothers me about the way my peers approach music. We’re all out of college. We all, more or less, have identities, and these identities do not rely on a particular musical scene for their substance—we’re not Goths or ravers. Yet still we jockey for musical superiority. S’s comment stung on a number of levels, all despite the fact that she delivered it as a joke. It was an insult, but it also embarrassed me and challenged the legitimacy of my even owning a turntable. The turntable is an implement of the ultra-cool hipster, not of the clueless dork, never mind the fact that generations of clueless dorks listened to Mantovani and Henry Mancini on their turntables before we were even born. S knows a lot about music and I understand why my buying a turntable would irritate her. To turn to music for a simile it would be as if she were an accomplished violinist and I came prancing up to her one day asking, “Hey, do you know about this Stradivarius guy? I just got one of his violins!”

But oh, how the bubble of my consumer bliss popped. Our trip to the Record Exchange was maddening. Instead of buying myself musty little presents I had to perform a sophisticated and horrible hipster calculus on every record I looked at. In front of S I could buy an album only if it satisfied a strict set of rules. It had to be unimpeachably cool (like the classic Billie Holiday) or ironic and silly (like the German theater music of the 20s). Anything without the stamp of enduring fame that one could be accused of actually liking smacked of genuine emotion for an illegitimate object, a crack in the hipster’s façade of cruel irony. S was not in the least malicious, and probably didn’t care if I bought a boatload of Lawrence Welk, but the power struggle inherent in our little tug-of-war over musical taste constrained me as I crouched on the floor of the Record Exchange paging through dusty bargain LPs.

And S is certainly not the only one. Check Facebook for precisely calibrated lists of favorite bands. Pay attention to the playlist at your next party (and there will be a playlist). With the increasing importance of MySpace and the Internet in music promotion why is it considered an achievement to know about a band before everyone else does? Frankly I’m tired of having to feel guilty and dumb whenever someone favors me with a pitying look when I have no idea what songs Band of Horses plays, or whether Neutral Milk Hotel is still cool, not cool anymore or was never cool. And god forbid you shouldn’t know all the begats stemming from Pavement. Seriously, fuck all you guys—mapping the shallow estuaries of indie rock is no more of an achievement than knowing the history of Magic the Gathering or the different cap styles of the Parker 51 Vacumatic. Most Americans, according to my friends, make abominable musical choices. Join me, oh you clueless masses, and break the hold of the hipster. You have nothing to lose but your chains! Let us doff the clothes of ostensibly good musical taste and walk naked and guiltless through a wilderness of saccharine pop and unsophisticated classical music chosen without a thought to anything!