Four versions of "Tighten Up," the greatest-ever instructional dance track. 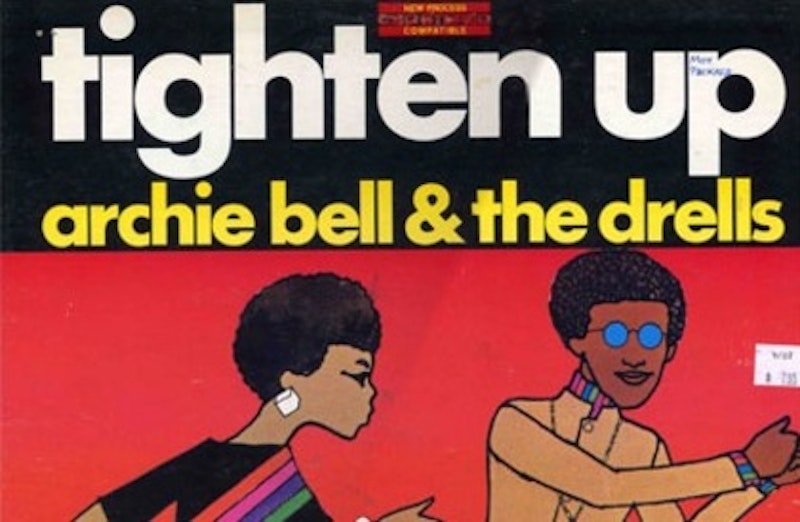 When I lived in Paris, the late night dance-bar selections were plentiful and diverse. If I wanted to stay nearby my apartment in Place de Clichy I'd head off to Le Blue Note at the footstep of Sacré Coeur. Most "Blue Note" clubs in the U.S. are smoke-filled jazz joints, but ironically this spot is known for riveting Bossa concerts that last until five in the morning. When I was comfortable walking across half the city at the end of the night, which more often than not I was, I headed out to Chez Georges. The first floor is nearly always jam-packed and people usually spill out into the street with their wine glasses. But the basement is what really makes the place special. There are hundreds of cave-bars in Paris but I can't think of any other hangout that mixed Yéyé era instructive dance songs with Klezmer music as often as Chez Georges. The hilarious thing is that kids would go crazy for this shit. Fraçoise Hardy would be followed by some Psychegaelic French freakbeat track and then all of a sudden the music would shift into “Hava Nagila”—the joke being that no one at the bar was Jewish.

Ever since those days, I've had a fascination with let-me-teach-you-how-to-do-this-dance...songs. Of course many of these tracks happen to be soul numbers that allow the band to build up and deconstruct its elements through solos. These songs are chock full of isolated bass lines and breakbeats. My favorite of all time is "Tighten Up" by Archie Bell and the Drells. It's the Godfather of didactic soul cuts. "Tighten Up" turned 40 last year and in that span it has been covered and reconfigured time and time again. Just like "Stagger Lee," there's a timelessness to the track that makes it endlessly adaptable. In my opinion nothing has eclipsed the original, but here are some versions that are worth noting.

Billy Ball must have been the only person in the world who listened to "Tighten Up" and thought, "Damn, that's too slow." "Tighten Up Tighter" sounds like a runaway train as Matthews shouts out regional destinations, "Tighten Up Tighter in St. Louis, Chicago, Detroit, Cleveland, Kansas City, Cincinnati, Ohio you're lookin’ good..." all without losing his breath. It's funkier than the original although arguably not as classy. It was however the defining moment for the band.

This version is not nearly as well known as the others listed here but it might be the coolest. Los Johnny Jets, who also played a mean "Bule Bule," keep the arrangement completely in tact. The enthusiastic exclamations of "Perfecto!" and 'Muy Bien!" are impossible to resist.

This is less a cover than it is a mashup of Archie Bell and the Drells with Cliff Nobles & Co. The songs mesh together surprisingly well by replacing the Cliff Nobles verse chords with the more identifiable "Tighten Up" rhythm. Although when it reaches the refrain, the band intelligently switches back to the big brass of  "The Horse." With Harlow's Jewish upbringing and the song's instructive approach, I would not be surprised if they played this at Chez Georges.

Crafting a song on the basis of a dance craze made sense in the 1960s. In the days of Archie Bell and the Yéyé girls, music was synonymous with clubs and dance floors and television bandstands. Associating dance moves with a given rhythm provided a lasting effect. If you remembered how to do the Funky Broadway or The Twist, you'd most likely remember the songs that came with them. American Bandstand is long gone but dance crave music still persists. Certainly in hip-hop, specific movements can bolster catch phrases. Just ask Soulja Boy. I don't know if Baltimore's Mullyman and his "Hustleman Shuffle" will ever fly in Parisian wine bars, but when you have a Baltimore-based rapper doing a shoulder-shake alongside Matthew Lesko you better believe that's gonna find a way into my article.