Keep It Abstract and Textural

A conversation with the Chicago trio Den. 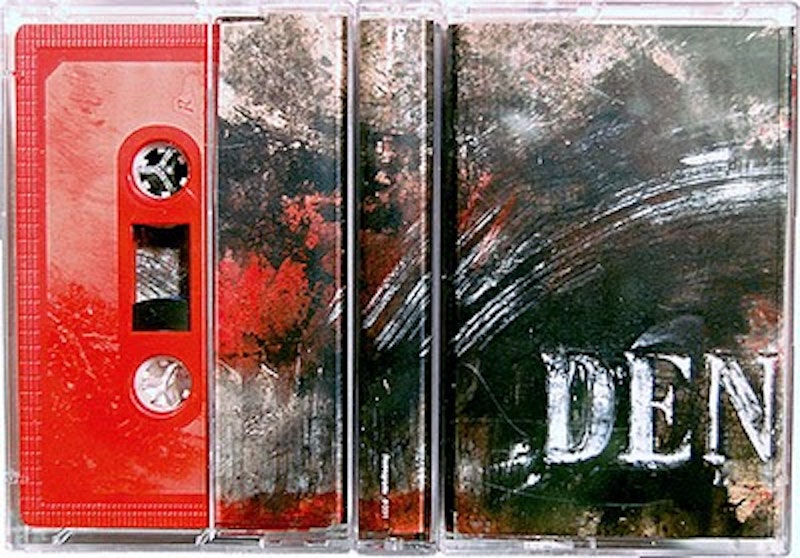 Upon discovering that a band named “Den” existed, you’d be forgiven for thinking the choice a mite strange. And hearing Bronze Fog (Retrograde Tapes), you’d be within your rights if you had no earthly clue how to describe the music to your friends. It’s not just that these guys don’t have a set style; it’s that they attack a whole passel of styles with the sort of inventive, loose-limbed gusto that suggests that there isn’t much they’re not capable of. There is fifth-stage Ozzfest Beelzebub bombast that somehow morphs into thrashing space-metal bombast a la White Hills without jarring transitions. There is digitally scathing noise. There is Jane’s Addiction-esque frivolity. There is four-horsemen-of-the-apocalypse no-fi hardcore.

(Warning: sometimes all of this shit goes down in the space of a couple minutes.)

Even a year after release, the Chicago trio’s refreshing debut cassette continues to mystify and enthrall. Ian plays drums; Ray plays bass; Adam, who is also the proprietor of Retrograde tapes, “fuck[s] with electronics and yells.” Splice interviewed Adam about the group’s origins, music, and future.

SPLICE TODAY: One of the great things about Bronze Fog is how it isn't limited to noise or metal, or even noise metal; I hear elements of funk, jazz, even a little Jane's Addiction in there. What are your listening habits like?

ADAM: The three of us have often drastically different tastes, but where they overlap it tends to be in strong agreement, like Sabbath or Melvins. Ian's been jamming Small Faces, Cat Stevens, & some Afro-Cuban religious songs, Ray’s into NPR, classic rock and oldies, and lately I can't get enough of Culo or Excavacations, and I just bought an LP from this guy that goes by KPLR that I absolutely can't wait to listen to.

ST: How did you guys meet and wind up forming Den?

A: We actually played in a hardcore band together before Den, where Ian and I had met through friends of friends; I think we recruited Ray via Craigslist. After a while things went sour with one of the other members and we were ready for something new anyway. We wanted to do something more heavy and noisy than stripped-down hardcore, so we started talking about doing heavy noise rock with the vaguest of ideas of what to do with it. The first memory I have of Den's conception is messing around with some electronics with Ian in the basement, stumbling onto a feedback loop using some shit-ball multi-FX pedal Ray had found in a dumpster and thinking: "Yes, this is what I want to do!"

ST: That's something I've noticed about hardcore, a commonality; there's a limit to the lifespans of groups who start out playing it. Either bands get tired of the genre or one another and call it a day, or they swing in a totally different direction.

A: Yeah, you know, with something that's so stripped down as hardcore generally is, it's something that burns really intensely for a relatively short amount of time, much like the songs. It's ephemeral by nature. There're always lifers in any genre or scene, but like you said most people get sick of each other or want to do something different after playing the same shit for a period of time, and understandably so. If things start to feel stagnant, they're not as rewarding or cathartic anymore, which really is the whole point of hardcore—the catharsis—so you just gravitate towards whatever is keeping things interesting for you & let yourself naturally grow into more ideas than just "alright, pissed and fast as possible, let’s go!"

ST: What can you tell me about the cover art for Bronze Fog? It's very raw, and primal.

A: I asked our friend Jacob Van Loon to do the cover & inside, with little more guidance than "keep it abstract and textural,” and he took it from there. About a week later he sent me images and I was pretty floored with what he came up with. The piece itself is actually pretty large, I haven't seen it in person, but even the high-res scans have an incredible amount of detail that appealed to my love of filthy textures and grime.

ST: Does "Bronze Fog" have an overarching concept or story?

A: Nah, there's no unifying theme at all; conceptually, the songs are kind of all over the place. One's a nerd's tribute to a comic-book character; another one is philosophical spouting; another is about how hilarious it was when Touchdown Jesus burned down after being struck by lightning. We don't have any real guidelines or themes when writing either music or lyrics; we just go with whatever sounds good.

ST: Can you tell me a bit about the songwriting/brainstorming process for the album?

A: There really isn't one. We just start with vague ideas and usually jam ‘em out until they feel like completed songs. One of us will come into practice with a germ of an idea—a riff or noise or general concept of we want to convey—and take it from there until it feels like it's cooked long enough.

ST: Is Retrograde Tapes a label you all operate together?

A: Nah, I do Retrograde by myself. At this point it's small enough for me to handle alone and honestly, I prefer it that way. I don't really want it to be a larger investment of time than what it is, which would probably require some help. Doing a few tapes per every-once-in-a-while batch is perfect at the moment.

Ian does his own thing with his label AVRCRC anyway, so we've all got our own things going on outside of Den.

ST: What's next for you guys in terms of recording and touring? Musically, it seems like the world is your oyster; your sound could theoretically go anywhere.

A: We're finishing up mixing for what will likely be a three-song 7" right now, and then once that's out we plan to tour somewhere, probably around the Midwest for a week. I really want to hit up Detroit again; last time I was there it was a blast, some great noise rock coming out of Minneapolis too. But after things fell through with accompanying Birth last summer we're itching to get out and play somewhere other than Chicago for a bit and meet some new people.

ST: Do you have a general preference for tapes as a medium? I'd argue that tape hiss adds a certain mystique to the Den sound.

A: Ian and I both love tapes. I think he was the one who turned me on to them in the first place. It's cheap, you can make it as long or short as you want, and you can do cool shit with the packaging, and of course tape hiss is an added bonus to anything loud and noisy. Some people bitch about it, but I love it; I hate when sound is too clean or overproduced. But also, if you ever listen to something like sad-bastard-with-a-shoddy-acoustic kinda stuff, or soft drone jams, or anything quiet really, it always sounds better crackled and warmed up by tape. I also dig the idea of listening to two sides, two slabs of sound, like a record, but tapes are much more affordable and quicker to put out.

ST: I have to salute your acknowledgment of bronze; silver and gold get a lot more attention in album and track titling.

A: Bronze Fog sounds way better off the tongue than silver or gold, like a 50's monster movie or sci-fi flick on MST3K.

A: Ian's a freelance graphic designer and does sound gigs, and I think he's scoring a short film right now. Ray's an attorney for the city. I'm an artist for a small software company.

ST: You guys should totally form your own multimedia company—you've got all the expertise in place.

A: Half-joking here but a completely retarded video is in the works.