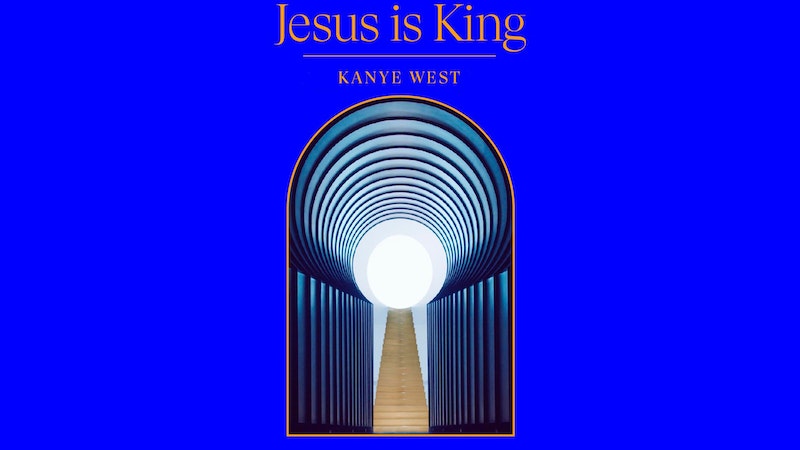 Rachel Haywire, a Splice Today contributor who is (actually) running for president and gives her occupation as "futurist," was there to catch some of the sparks that flew when Kanye West began preaching to his choir. Her article is here. If you see a picture of a fat, underdressed Kanye, staring at his shoes like he's spent the whole day mopping up other people's sick, you're in the right place.

"What happens when celebrities go Christian?" Haywire asks. I assume she's referring to "real" celebrities, not the countless people who are famous specifically for being Christian. I'm thinking of (for example) the people who make those "documentaries" proving that God is real. I'm thinking of Rick Warren, Joel Osteen, and anyone else who’s nationally syndicated, stadium-ready, and called to transform the lives of listeners like you. God was already plenty big without Kanye, but Kanye's the new enabler for critics itching to write about religion-as-pop-culture. He's "becoming his own personal Jesus in the tradition of Depeche Mode." He's letting Jesus take the wheel, in the tradition of Carrie Underwood, because there's something in the water.

Kanye’s in a state of holy denial, sacred desperation, and artistic decline. Jesus Is King is another rotten testament we'll end up shelving alongside Bob Dylan's Saved, T. S. Eliot's "Ash-Wednesday," and all the other works by latter-day Jesus freaks who just had to ascend the nearest tabernacle to avoid dying of art for art's sake.

Haywire wants to know if Kanye's album can shift the "cultural hegemony... into a higher realm" through "'hip' Christianity." I want to grab her by the lapels and make her listen to the entire Jars of Clay discography. That's the only way to learn exactly how awful Christian groupthink sounds when it's trying to be cool. It's more sportsmanlike, though, to bust out a still-pristine copy of Seven Swans, the Sufjan Stevens album about being simultaneously Christian and indie. Stevens is completely in awe of those old Bible stories; he gasps audibly every time he thinks about Abraham preparing to set Isaac on fire in the name of the Lord. Seven Swans is beautiful; finger-picked and misty, it's as hip as they come, by any standard. It's also obscure and forgotten. Admit it: when Sufjan asked, "Can I get a witness?" we answered, "No."

Haywire calls Kanye's audience a "demography," but this is no cultural moment we're witnessing. Kanye is simply squandering, all at once, the credibility he's earned. There's a certain self-destructive relish that a wordy artist feels when he gives in to generic sentiments. On every one of these "Kanye" tracks, you can hear America's favorite maverick giving conformity a try: "It's a hard road to Heaven... in the Father, we put our faith ...King of the Kingdom," he sings (...I'm sad to report). Instead of writing actual lyrics, Kanye has recorded 11 dead-on impressions of a bleary, divorced Men's Group leader trying to make conversation after four cups of eggnog. Then Kanye, the pious maestro, humbly steps back. He gives Kenny G center stage, and Kenny delivers a soothing, melodious saxophone solo that brings new meaning to the term "cry for help."

On Yeezus, every sound effect deepened the effect of Kanye's boiling rage and uncontrollable ego. Here, on the other hand, every track falls somewhere between dissonant experimentation and shopworn clichés. For instance, if you hear a pitchy, distorted choral sample, you can bet it will be immediately followed by an awkward, earnest chorus. Why is that (slightly) futuristic intro even there, you ask? As a conversation piece for suckers, so they can applaud the emperor's new clothes. Kanye quotes incessantly from his own previous hits on this album; he even trots out his catchphrase "on sight!" from Yeezus. One some level the whole enterprise is horribly cynical. This is why, sooner or later—try as you might to be open-minded—your stomach will turn.

Kanye is rich enough, famous enough, and young enough to survive his own album. He can get a divorce from Jesus in private, far away from our prying eyes. Like all celebrity uncouplings, it’ll be quickly forgiven, especially if he’s polite about his ex. There will be some people who’ll keep urging Kanye and Jesus to get back together. But the payoff will come when Kanye looks back and mocks what he's done so badly here. That will be a great album. It'll be a Second Coming of the old, unrepentant Yeezy. W. B. Yeats once observed, speaking of no one in particular, that "the best lack all conviction, while the worst/Are full of passionate intensity." We live nowadays among feeble saints and incandescent sinners. Kanye West is this pairing personified. He’s a little bit of both.