One of the cutting-edge voices of opera commentary raps about the Baltimore opera scene, the "appalling abuse of [a] cimbasso" and gateway drugs. 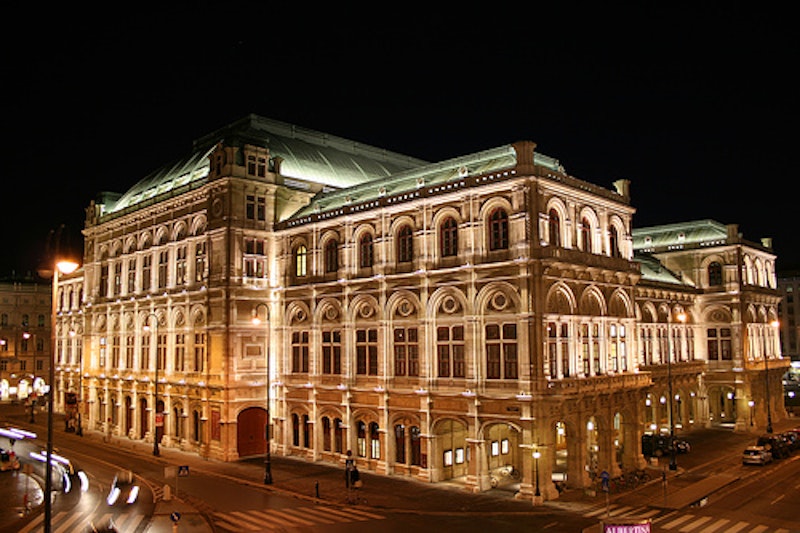 Opera suffers from a dusty popular reputation, something having to do with inherited images of Viking horns and breaking glass. Part of the problem is the unapproachable expense of going to performances-decent seats at the Metropolitan Opera in New York rarely cost less than $100-and scarcely less affordable recordings, usually between $25-50. Yet the melodrama and beauty of the form continues to inspire devotion; singers like Luciano Pavarotti and Maria Callas enjoyed huge popularity in the 20th century throughout every socio-economic class, and contemporary singers like Renée Fleming still sell out venues around the world. And the fact remains that, from Mozart's ethereal The Magic Flute to Britten's spooky The Turn of the Screw, opera contains some of the most vital music ever performed.

Opera has managed to keep itself in the headlines in the Noughties, from Woody Allen's staging of a Puccini opera in Los Angeles last year to David McVicar's controversial 2001 production of Rigoletto in London, which featured an incredible amount of nudity and reset the opening scene from a royal court to a whorehouse. In September, the gala opening of the Met's season got a lot of publicity when audiences booed and walked out of Luc Bondy's production of Puccini's Tosca. One member of the audience, blogger Opera Chic, unapologetically chalked up the controversy to the mediocrity of the director and the audience:

Only in New York, seriously, a half-a$ed minimalist like Bondy could be depicted as some sort of deranged Calixto Bieito by an audience eager to preserve (in amber) Franco Zeffirelli's stagings for all eternity (and obviously Frengo, for all his by0tchyness, does well what he does -- his old Bohème and Tosca and Aida and more than a few other stagings are indeed well thought out and worth seeing -- but, really, how many times? Like, forever?).

That's right. Franco Zeffirelli, who directed the classic 1968 film of Romeo and Juliet, is a byotch, and clearly not the institution Opera Chic wants to live in. A self-described "young, American, classically-trained musician" living in Milan, Opera Chic has made a name through her gossipy, incisive, very funny writing that treats her subject as something too few writers do nowadays—something alive. Her blog occasionally features Perez Hilton-esque MS Paint doodles over pictures of performers, but has also broken serious news, including the Baltimore Opera Company filing for bankruptcy in December 2008. This has led to interviews in Classical Music Magazine and praise from The New Yorker's Alex Ross, for her "fearless, funky-fresh reporting." Splice Today caught up with Opera Chic somewhere between New York and Milan to talk about, among other things, why emo kids should like opera and why only listening to recordings is like so much masturbation.

Splice Today: How do you go about explaining to your hipster friends that it's okay to listen to opera when they give you That Look?

Opera Chic: I don't have any hipster friends (I don't live in Brooklyn). And anyway, opera is so emo it should sell itself to that crowd.

ST: I guess that was more about me, but anyway. It's a very broad question, but how is the state of opera right now?

OC: Hans Werner Henze is still working. It's all good.

ST: You have called Henze "the greatest living composer." What makes him so?

OC: I always call him that-even before Stockhausen passed away, there was no one else like Henze, his accomplishments speak for themselves, all due respect to Dutillieux and Glass and Carter and Sciarrino and Adams and Reich and Saariaho and Knussen and Lindberg et al. Henze represents the victory of music-of warmth-over mid-20th century dogma. He represents serialism with a human face. And his opera output has no peer since, well, Strauss.

ST: This brings up an interesting point: You mention Hans Werner Henze, whose work is frequently overtly political. American composer John Adams' operas—Nixon in China, The Death of Klinghoffer, Doctor Atomic—are also very political. You just did a great interview with the poet J.D. McClatchy, who has written a libretto for Giorgio Battistelli's opera based on An Inconvenient Truth. Is contemporary opera more topical than earlier opera, and to what end?

OC: Well, sometimes it makes reference to events that are nearer-19th century Italian censorship for example did not allow that so references could not be that topical. It's more direct because we have more free speech, period. It also became cooler to be liberal, these last couple of centuries.

ST: Your blog is different from much other opera writing because it comes from a young person's perspective. In your experience, are younger people going to the opera?

OC: Sadly, no. Can't blame them, really, it's expensive, it's badly marketed, there's no public education to speak of to introduce kids to classical music anymore. And, frankly, a sizable chunk of opera aficionados don't really make one want to join them in the opera house.

ST: Do you consider yourself to be part of that chunk of the opera audience? I guess it rests on a wider point—should opera be as approachable as pop music?

OC: It can't be as approachable; it's a different beast. It's OK.

ST: The recent reconfiguration of the opera scene in Baltimore (written about in detail by Washington Post's Anne Midgette here)—the flourishing of small, semi-professional companies after the closure of the Baltimore Opera Company last year—has been interesting to watch. Do you think this could become a trend, with larger opera companies becoming unsustainable?

OC: Well, after I broke the news of Baltimore Opera Company filing for bankruptcy, I asked a few contacts what would happen then, and they all pointed out that the opera experience would reconfigure itself in the city, but opera wouldn't disappear. It doesn't mean it didn't suck that the company went under, but opera, like life, always finds a way.

ST: Do you see a future for opera more in smaller chamber settings—or art spaces, like new music ensembles in New York and elsewhere—with fewer of the grand houses like the Met and La Scala?

OC: In smaller cities, yes. Funding dries up, audiences get older, so yes, I think we'll see fewer big companies, and the provinces will have to figure out a different game plan.

ST: You have attended many performances on both sides of the Atlantic. This is a huge generalization, but are there any notable differences between American and European audiences? Does it vary by city?

OC: Well the Italians are about as conservative as we are. The Germans are insanely, almost reflexively radical. But they truly don't seem to understand Verdi's sound. I like the Austrians, the Swiss too.

OC: Appalling abuse of the cimbasso in a Traviata performance. The cops should have stopped them.

ST: The readers will have to imagine what strange and wonderful things can be done to low-brass instruments onstage ... Anyway, as shown by the recent controversy over Luc Bondy's production of Tosca at the Met, there seems to be a divide in opera enthusiasts between more traditional stagings—like those by Franco Zefferelli—and iconoclastic ones, like the minimal, overtly sexual productions by directors including Graham Vick and David McVicar. To go beyond that controversy a bit, what do you think makes a really good opera production?

OC: The problem is that Bondy is very conservative and at the Met he got treated as if he's Calixto Bieito. Which is funny, and sad. Not much sex in Vick, actually, thank goodness, but I get your point. What makes a good opera production was explained much better than I ever could by Vick himself:

A great performance speaks to everybody ... If you put at the heart of an opera company the desire to serve the art form, and genuinely make it available and invite in the complete cross-section of society, then everything that company does comes somehow or other under the heading Education ... the skill to be taught in these programmes, throughout an opera house, to every audience and every sponsor, the skill we are in danger of losing, and the biggest threat to our own art form, is listening. It's the only door you need to open: how to listen.

ST: With "overtly sexual," I was thinking of David McVicar's production of Rigoletto a few years ago at Covent Garden in London, in which they reset the opening scene from a court to a whorehouse. Last spring, one critic called Bieito's Berlin production of Mozart's The Abduction from Seraglio an "inhuman carnival of sex and death." Do you think this sort of reinterpretation does more help or harm to opera's position in contemporary culture? It certainly raises its profile.

OC: It doesn't really raise its profile, it makes normal people think we're nuts. But they won't be coming to the opera anyway, so it doesn't really matter. That Rigoletto [in Berlin] was actually quite good; haven't seen Bieito's Seraglio but his Rake's Progress is a masterpiece. His Wozzeck is very good also. He's no charlatan.

ST: To change subjects—how did you start listening to opera?

OC: At home, my parents' CDs. Then the Met. Juan Diego!

ST: It sounds like it was the live performance that really made you into an addict.

OC: It's the real thing.

ST: Is there a good starting place for listening to opera, or should people just start listening indiscriminately?

OC: I think La Bohème is the perfect gateway drug. As a live show, it's a great introduction to opera. It's witty, it's fun, it's moving, it's easy to follow, the music's very, very catchy. It's memorable.

ST: You have written that it is vital for people to go to opera performances, rather than just listening to them on CD. Why is that?