When is a music genre too specific to mean anything? 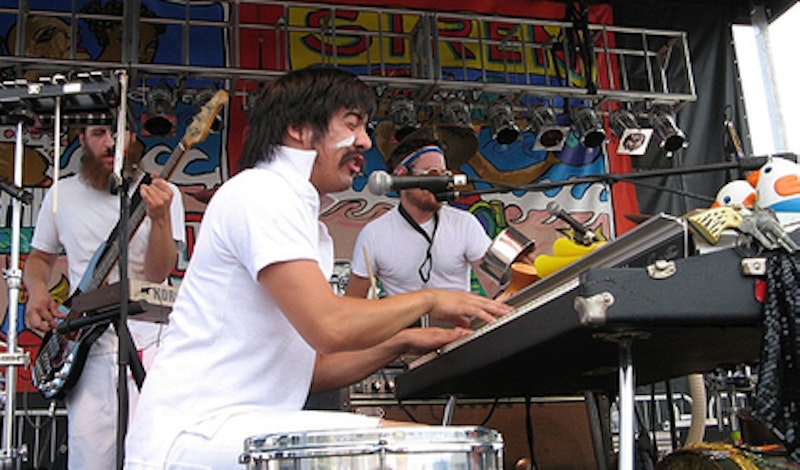 Convoluted music articles predate The Fader, Pitchfork, or for that matter, all online media. If you skim through old editions of forefather music mags like Rolling Stone and Creem, you'll notice that they absolutely reveled in masturbatory puff pieces. Just look at Lester Bangs' gloriously ludicrous reflection on Astral Weeks, which spends as much time talking about Lorca as it does Van Morrison. But while those articles used the full composition to digress and reach new topics, the current trend for music critics is to pack everything into one phrase—to describe a band's sound in a convenient two hyphen, four adjective amalgams.

This isn't necessarily a bad thing. It's a far cry from the days when music genres consisted of all-inclusive captions like Pop/Rock and Singer/Songwriter. And citing influences and creating subdivisions can be both creative and thoughtful. But the current trend knows nothing about patience, and this is a bad thing. Nowadays, it's common for a music review to pack a column's worth of descriptors into one sentence, which is just as lazy as qualifying everything under Rock or Pop. So much for bucking the trend of yesteryear.

There are only a handful of current bands that really, really excite me—or at least provoke the same level of anticipation I get from Numero Group releases or Soundway Records box sets. Man Man and Black Lips are two of those bands and incidentally share many qualities. Both have a predilection for hip swaying doo wop. Both are known for reckless live performances. And both bands play music that seems to release the creative muses of most critics. The problem with playing eclectic, genre-bending music is that it inspires rambling, unintelligible labeling from music obsessives. In an interview with Black Lips drummer Joe Bradley, he recalled an article in Spin magazine that described the band as, "ninth-hand rock-a-billy garage core." What does this mean? I have no fucking idea, and neither did the Black Lips. This and other inane descriptions led the band to establish an official genre, something called "flower punk." From this point forward, "flower punk" would work like pleading the fifth. Any question about genre or sound got the same response.

Upon the release of Six Demon Bag, Man Man experienced the same problem that afflicted the Black Lips. Their music was described as "demon-haunted," "punk-wop," or "gypsy-Viking" something or other. I offered up the term "mustachioed R&B," which I still believe is pretty decent. Fed up with too many of these freewheeling descriptions, it didn't take long before the band started hawking its own genre. "Kitchen-Sink Pop" might only scratch the surface of the band's eccentric sound, but to the group, it was the perfect way of saying, "Just listen to the music." When I talked to lead vocalist and pianist Honus Honus on the phone, and asked about the group's newest album Rabbit Habits, he gave a brief, manicured response. "It's a pop album." The phrase seemed to roll off his tongue mechanically. And why wouldn't it? He'd probably already been asked to describe the group's sound by a million other journalists.

Man Man and Black Lips play this routine out of practicality. For a tremendous amount of listeners, music categories don't really exist beyond rock, pop, hip-hop, etc. If it has a guitar and a melody then it's all the same, right? But it also comes from a mild disdain for writers aiming to coin a new niche. With these niches comes a sense of having pegged down the sound of the musician. In this vein, a writer can label Devendra Banhart as freak-folk and call it a day.

Often a critic will combine music and image and just give it one all-encompassing qualifier. For Black Lips, the term "sloppy" seems to be used a lot to illustrate the group's live guitar work as well as their drunken, on-the-road lifestyle. Likewise, Man Man has been deemed "burly" a number of times, describing both the baritone of Honus Honus and the facial hair sported by the band members. Sometimes these terms can appropriately describe an overall aesthetic. But when they are thrown together with a hodgepodge of other adjectives, they end up sounding like a quick and all-too-easy way to characterize the band while saying very little about the music.

There is an element of superficiality in any form of labeling, whether it's the bland music genres of the past or today's overstuffed adjective combos that really don't make any sense. I guess a middle ground can be found between the two styles of writing, but as far as genres go, maybe we can try to avoid them. The witty and efficient approach adopted by magazines and music sites today can be beneficial, but often it trades in deep thought for immediacy and stickiness. Just ask Man Man and Black Lips, who have both gained huge followings from this labeling, yet despise it.

Demon-gypsy-sloppy-Viking-tormented-blues-rock! Sometimes you forgot that these are just a bunch of guys who sing and play instruments.