"In the Air Tonight" For the Rest of Your Life

I'm not excited about a new generation glomming onto Phil Collins so I can be baffled for 30 more. 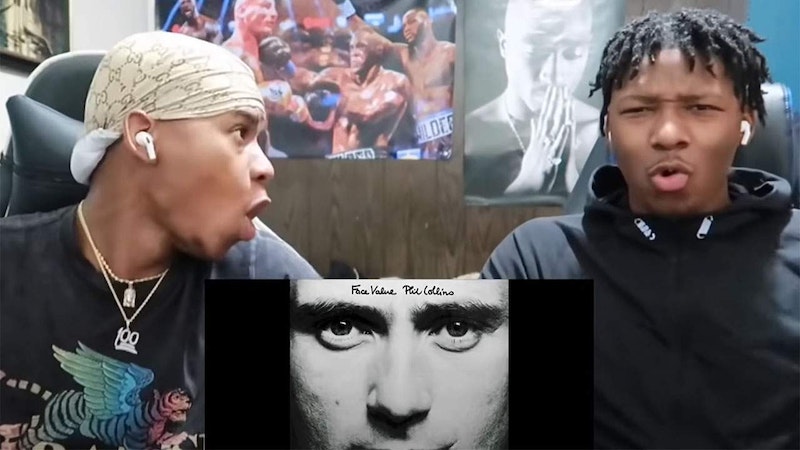 Last week, the world was united in appreciation of Phil Collins—or more specifically, of two 21-year-olds appreciating Phil Collins. YouTube twins Tim and Fred Williams listened to "In the Air Tonight" for the first time in their "First Time Hearing" series, and reacted with adorable shock to the big drum solo." “I ain’t never seen somebody drop a beat three minutes in a song," Fred says, as the two collapse into giggles. Everyone, of every generation, was warmed.

Not me. I hate Collins, and the big drum solo in that song doesn't delight me. It makes me want to make small gasping noises. I can feel overproduction in the air tonight.

I've been baffled by Collins' popularity for 30 years, and while the Williams twins seem lovely, I'm not excited about a new generation glomming onto Collins so I can be baffled for 30 more. He's the Pat Boone of his era, taking the innovations of New Wave post-punk and the exuberant dance floor hooks of post-disco funk and turning it all into inoffensive schmaltz. And not even good schmaltz. He doesn't have the vocal oomph of Whitney Houston, or Neil Diamond's weird, coked-up flamboyant bombast, or ABBA's fussy song suites draped in valley smiles. The would-be ominous pulsing nonsense of "In the Air Tonight" is an over-eager parody of angst—a bank clerk furrowing his brow and trying to smolder. In the video he literally gazes through a window at the moon to show the depth of his intensity. Or maybe he's just constipated. Collins' music makes me angry. Why don't I suffer in silence? The Williams kids are having a good time. People are happy and grooving together to that big, stupid beat. Why do I hate joy and life and vague spiritual/sexual/romantic vibes dropping out of the air tonight, to wrap us all in a comforting blanket of schlock.

But when you don't love the song, and can't escape it—that’s less enjoyable. One of the iconic experiences of pop is universal validation. But another iconic experience of pop is having the universe say you’re a weird misfit who doesn't understand joy. The Williams brothers went viral because they distill that moment when you discover that you love the same thing as everyone else. But there’s also that moment, as universal, but more private, when you discover that you hate Phil Collins, Neil Diamond, Led Zeppelin, or Beyoncé, and that the world is against you.

When that happens, you can nurse your alienation in private. Or you can form your own smaller anti-pop community. I know you Phil Collins' haters are out there in the fart-scented air tonight. We will recoil from the drum solo together.