I Know That Tune 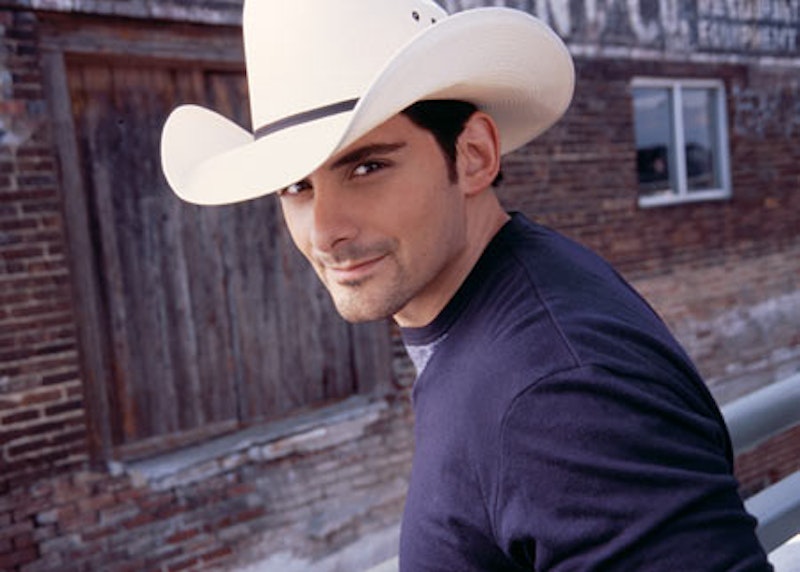 You wear the pants
Well, buddy, good for you
I’m so impressed
Yeah, woop-dee-doo

So sings Brad Paisley in the song “The Pants,” from his most recent album American Saturday Night. Paisley is arguably the biggest male star in country today. A winner of multiple Grammies and CMAs , he co-hosted the CMAs last November and recently scored an apparently lucrative deal with T-Mobile. He’s even big on the largely country-shunning East Coast; last October, he played Madison Square Garden. And this weekend, his sultry voice and somewhat problematic lyrics were blaring out of the car speakers as I drove down the New Jersey Turnpike.

Paisley, who can seriously rip on the guitar, is known among country fans (among whom I count myself) for his ability to write both stirring emotional ballads of the kind we often associate with the genre, but also tongue-in-cheek social commentary. “The Pants” certainly falls into that second category, as does his song “I’m Still a Guy.” Regular readers can have no doubt as to why these two particular Paisley songs appeal to me: They’re both about gender.

Masculinity in modern country music is a messy business. The men depicted in country lyrics, and the men who sing those lyrics, often embody a series of competing and contradictory ideals. They’re tough, but tender. They’re independent but devoted to their women. It’s a difficult balance to strike, one that is often glorified by the men who sing about it, and there’s no mercy for the man who doesn’t strike it just right. Paisley’s highly entertaining “I’m Still a Guy,” for example, is about how the trend of metrosexuality is taking the “tender” side of the equation just a little too far:

These days there’s dudes getting facials
Manicured, waxed and botoxed
With deep spray-on tans and creamy, lotiony hands
You can’t grip a tackle box
With all of these guys lining up to get neutered, it’s hip now to be feminized

The lyrics to this particular verse are accompanied by both a music box sound effect and a tuba, driving home Paisley’s mockery of metrosexuality. The problem with metrosexuality, the lyrics suggest, is that these men aren’t really men at all, but modern eunuchs whose voluntary genderlessness renders them incapable of doing manly things, like fishing. No matter how “hip” it might be, acting like a woman makes you a joke. Because women do silly things like adhere to the beauty standards world sets for them.

So since country music’s ideal man clearly isn’t artificially tanned or hairless, what does he look like? Paisley, sticking with the idea of contradictions, gives us a man who has a soft side. But he also shows other men, and his woman, who’s boss:

I’ll pour out my heart, hold your hand in the car
Write a love song that makes you cry
Then turn right around, knock some jerk to the ground
‘Cos he copped a feel as you walked by

The point of “I’m Still a Guy” is that while Paisley will do some things that reveal his soft side, like expressing emotion, he’ll only do them in private. When it comes to performing masculinity, to demonstrating just how much of a “real man” he is, he prefers to do that in public, preferably with his fists, fishing rod or gun.

Things don’t get much more progressive with “The Pants.” Initially, the song sounds like a rejection of machismo masculinity, a playful jab at men who think they’re running the show simply because they’re men. “It’s not who wears the pants,” Paisley sings, “It’s who wears the skirt.” Yeah! Girl Power! But, as it turns out, the song is really about how men are sex-crazed animals who are kept in line by the women who grant or deny them sex:

Women are physically weak but can control strong men through sex. Original.

It’s lyrics like these that make me file Paisley’s music in my “Non-feminist Guilty Pleasures” playlist. Men who are so ashamed of their feminine side that they’ll only let it out in private? Women who take perverse pleasure in denying men sex? Making fun of men who do “girly” things like pay attention to their appearance? Evidently, the face of modern country has no intention of challenging the genre’s status quo when it comes to gender roles. He’s talented and funny, no doubt, but no amount of guitar-ripping ability can hide the fact that Brad Paisley is just singing the same old song.