I Coulda Been a Ringtone

5 songs that seem destined to play on your cell phone. 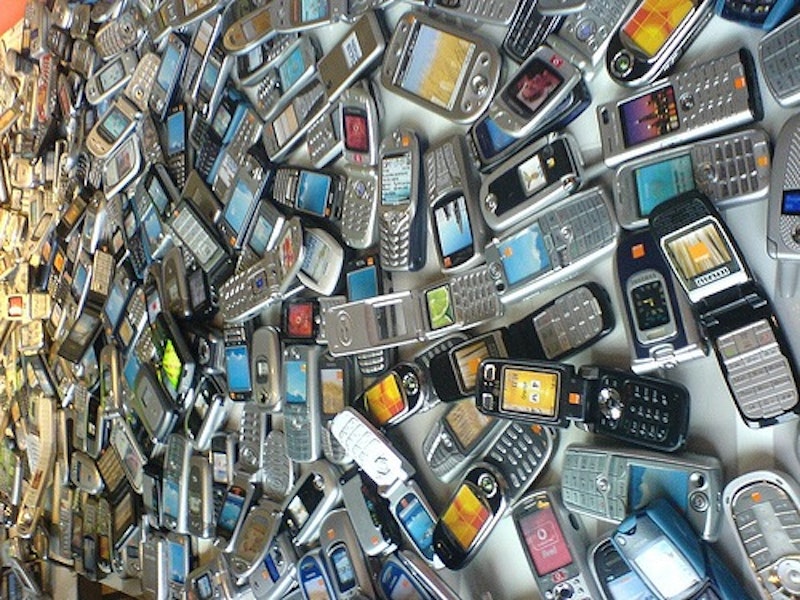 Most of us remember the year 1999 for the panic-stricken hysteria that surrounded the Y2K scare: computer programmers were flipping out, mothers bought crates of bottled water, and one politician even called the event the electronic equivalent of El Niño. But for all the negative hoopla created by the computer and electronics industry that year, there was one major technological achievement that almost turned the anxiety into an afterthought. After years of shuffling from one awful MIDI ring tone to another, phones finally came equipped with the power to play mp3 files and the people rejoiced. This advancement led to an entirely new market of personalized ring tones. You could even resurrect Tupac on your phone.

Ten years later, we've come full circle. Children are no longer fazed by wacky sound bytes and mp3-quality songs don't need to be reconfigured as a ring tone when they can be simply played like on an iPod. Plus, 8-bit and MIDI sounds are all the rage. Just check this out. If we are to assume that tinny versions of pop hits or even the tender sounds of a baby crying through a talk box just don't have the same head-turning appeal as they once did, than what does catch our ears nowadays? May I suggest songs that sound like ringtones (But, of course, much much better).

Back when the Good Humor man could still sell bubble gum cigarettes, Dan Snaith went by the moniker Manitoba and released a gorgeous little pop album titled Up In Flames. My favorite track was, and still is, "Crayon," a whimsical, playtime opus that seems to capture those speckled memories of childhood by way of its instrumentation (xylophone and barking dogs, anyone?). What makes "Crayon" work exceptionally well as a ring tone is its surprisingly lush melodies. The fun-size drum kit and xylophone motif recall the tones that one would already find on their cell phone, but never would those sounds be so charming and vibrant.

This might just be an excuse to put some Bonobo up on Splice. In any case, "Flutter" is another one of those tracks that works perfectly from the moment it starts. The song has a similar chiming xylophone sound to it, accompanied by a simple drumbeat. When the song starts, my immediate thoughts are of Christmastime jingles that always begin promisingly with ringing bells before turning into a gooey, sappy mess. I wouldn't say "Flutter" is my favorite song by Bonobo, but, when used as a ring tone, it takes on a different character that I otherwise wouldn't have noticed.

At only 30 seconds long, "Pulling on Pigtails" was that sweet little palette cleanser that inadvertently became more captivating and memorable than every other song on the Bound Stems' 2006 album Appreciation Night. The composition is rather simple: take Janie Porche's sound check, then mix in some truncated drum work and a single voiced syllable looped continuously to sound like breezy electronic blips (or the other way around). Sure, this is a departure from the formula of the previous two songs, but it shares the same overall mantra of pattern over progression, which, in my books, is a pretty crucial trait when searching for a ring tone.

On a technical note, the real cell phone glory moment of this song takes place 40 seconds in. By this point, all of the shimmering sounds and quirky squeaks have joined in with the piano keys. If you want to let the ring last all the way through Robert Smith's first verse, go right ahead, but that would entail your phone ringing for at least 30 seconds without the caller hanging up. But hey, if you have friends that dedicated, more power to you.

In 2007, one-man glitch pop maestro Secret Mommy quietly released one of the year's best albums in Plays, a collage of quirky trumpet blasts, vocal snippets, and unshakeable melodies. "Diciduism" is one of the album's more vanilla tracks, at least in comparison to the bolder experimentation of "Grand About the Mouth" and "Koolaid River." But it sure makes for an excellent ringtone. The hand-crank sounds and door springs add some rough texture to the somewhat clownish horn intro. On the other end of the song—during the last 45 seconds—the melody is left bare in the form of some accented strings. Either end makes for a rather eccentric, yet delightful, tone.

Ring tones don't have to be your favorite song. If that were so, I guarantee you that after two weeks, that song will no longer be your favorite. But do keep these thoughts in mind: one, the song is coming out of your cell phone so stay away from sonic elements that require real speakers. Two, you're choosing fifteen seconds of a track; so don't expect progression or crescendos.

And finally, isn't vibrate really the best way to go?