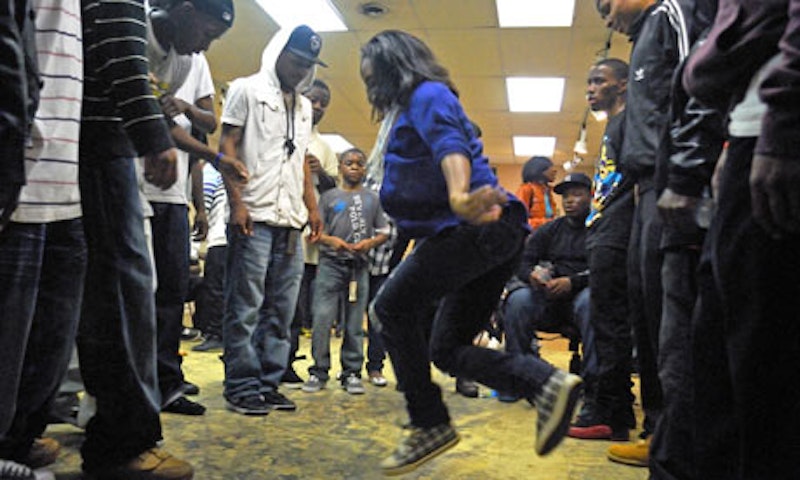 The repetition is addictively flattening. This is music as endless bland trance, everything reiterating into a meaningless blur. Hip-hop is about the clever dexterity of the samples and the wordplay; jazzy individualistic improvisation. This…this is droned out and faceless; incongruous samples like “The Lion Sleeps Tonight” run round and round for two minutes till you want to strangle yourself or go into a coma; random profane phrases spit out and spit out again and spit out again till they don’t even register as offensive. The whole comp is sexless, the beats coming in rapid bursts like balls bounced on the ground and then stopping again, utterly impervious to funk. Compared to this, nerdy electronica swaggers and Xenakis swings. “Ima dog Ima dog Ima dog Ima dog Ima dog,” one track insists, but really it should be saying, “Ima cas Ima cas Ima cas Ima castrated robot.”

Check out actual videos of footwork competitions online and “castrated robot” starts to seem even more apropos. The dancers look like Michael Jackson in a sped up film, their legs pounding and racing in time to nothing. The music’s there, but its fractured loops seem divorced from the motion of the performers; they might as well be dancing to a leaf blower or a boiler. The technical facility is amazing, but it seems to occur in a vacuum. Passion is bled away and all that’s left is motion and sound, spinning on automatic, like a projector running after the film has run out, the loose end of the last reel stuttering on and on until the projectionist wakes up to turn it off.

It’s hard to imagine this style ever going pop. Maybe one or two tracks on the comp suggest a path; DJ Trouble’s “Mosh Pit” has a repeating classic rock guitar riff, for example, and something that comes within spitting distance of an actual beat. But it’s telling that Kid Sister, a thoroughly awesome Chicago pop artist who occasionally name-checks juke, sounds way more like the early 1980s than she does like the stuff on Bangs & Works.

Still, who knows? Afrika Baambata must have seemed like he was coming from another planet to boring middle-aged white people like me when he first appeared on the scene. Maybe bloodless spastic trances are the future. For that matter, it’s a little miraculous, and not a little inspiring, that they’re part of the present.