Why death metal has it so easy, and why Shelby Lynne's new country record isn't that good. 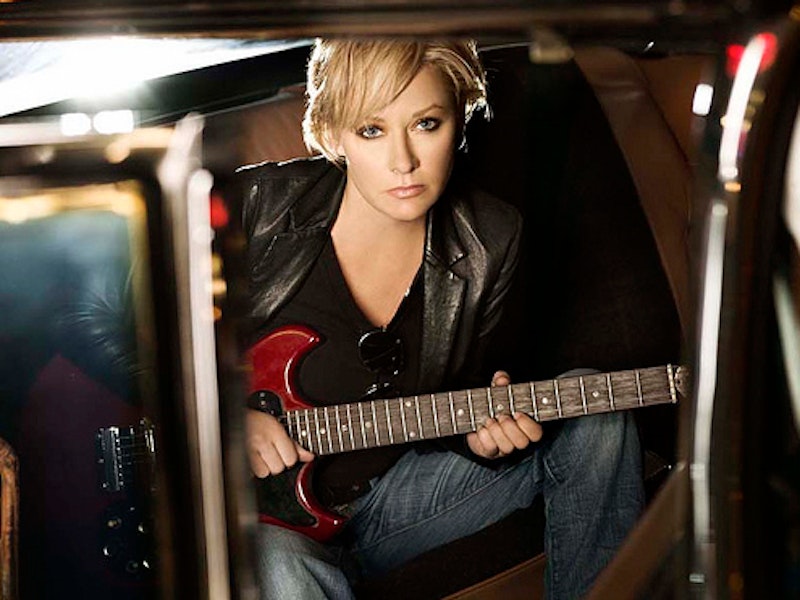 I’ve been obsessed with death metal recently. Decapitated, Disincarnate, Dismember, Deicide, Demilich and, of course Death; the best fucking band names in the world of music, and these are just the ones that start with “D.” I love that listening to death metal on an iPod is like collecting every word in the dictionary that could possibly be considered morbid and gross and putting them together almost at random. And yes, I’m sure there’s a band named “Morbid Gross” out there somewhere, and their singer sounds like he’s gargling knives and the music is like being bashed upside the head with a decaying goat tied to a spinning helicopter motor because that’s what death metal is, damn it. Just ask Carcass or Cancer or Cannibal Corpse or Kreator.

I’ve also been listening to the new Shelby Lynne album, Tears, Lies, and Alibis, which has nothing to do with death metal at all. You can hear the lyrics. They are sensitive songs about love and heartache rather than vile despicable ruminations on nuclear winter, incest and stripping the flesh from the rotting Christ with your teeth. And, to get a little more meta, it’s always clear why a death metal album is death metal, but it’s not at all clear what Shelby Lynne is supposed to be. Folk? Pop? Country?

Country is where she’s usually filed I think, and that’s actually the best explanation of her genre incoherence. If death metal revels in fiendish formal consistency, country has long been defined more by who’s doing the dancing than by what they’re dancing to. Music by rural whites for rural whites, country has borrowed variously from jazz, rockabilly, rock, pop, soul, blues and whatever else happened to be around, just so long as it wasn’t too up to the minute. Death metal (or for that matter, bluegrass) is what it is; country is who is playing it and listening to it.

What this means is that fans of country—even more than fans of pop, perhaps—aren’t especially partial to a particular musical style. Listening to country means listening to an amalgamation. As a result, there’s a great deal of emphasis on personality. Death metal performers are relatively hidden, obscured behind their technical mastery and their unholy obeisance to the tropes of their genre. Country, though (or punk) is all about charisma—your stories, your voice, your sexiness, your humor. If death metal is anonymous assault, country is personal seduction.

Which helps explain why I’m not into this Shelby Lynne album. Not that I don’t like country—overall I probably like classic country more than death metal.  Lynne just isn’t that charismatic. She’s got all the technical bits down, no doubt—her voice is rich and full, with a touch of plain speaking that comes across as sensuality. The songwriting is unimpeachable, from the Beatlesesque “Rains Came” with its woodwind accents, to the swinging soul come-on of  “Why Didn’t You Call Me,” to the earnest folkisms of “Family Tree.” It’s all done with professional polish and even moments of inventiveness. If it were death metal, I’d thrash my head to it happily.

But it’s not death metal, and as a result its roteness is a problem. Country has no solid formal grounding to fall back on, so mere competence, or even hyper-competence, just isn’t good enough. George Strait, Leanne Womack, Lyle Lovett or K.D. Lang, to cite some artists comparable to Lynne, all manage, at various points, to be funny, weird, eccentric and heartfelt. I don’t necessarily adore everything those singers have done, but they do put an original stamp on their material. You’d have to go a long way to find someone who could put as much rueful pathos as Strait does into the couplet, “Oh she tells her friends I’m perfect and that I love that cat / But you know me better than that.” It’s hard to think of anyone who could sound as simultaneously ridiculous and heartbroken as Womack does when she declares “I’m the fool in love with the fool who’s still in love with you.”

There’s no comparable moment like that on Lynne’s album. Yes, she has a great voice, but a lot of people have great voices, and it’s hard to see how this album would be changed if one of them sang it instead of her. When you listen to a country album, you’re always asking, “Who are you? And why should I love you?“ If Shelby Lynne were Morbid Angel, Malevolent Creation or Massacra the answers would be, in order, “no one” and “I will feed your corpse to the pit.” But she isn’t, and so the answers instead seem to be “I’m not sure,” and “because I’m a little bland.” Which is why I’m turning off Shelby now.