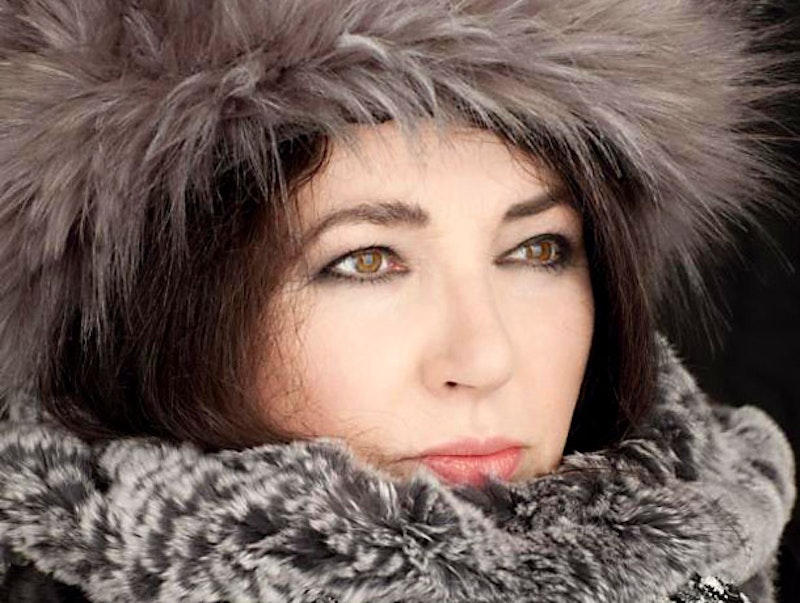 Ethereal voice soaring up and soaring down; drifting accompaniment that occasionally coalesces into pop hooks—listening to her new album, it suddenly struck me. Kate Bush is this generation's Joni Mitchell.

I'm not the first person ever to make that link—and, indeed, a quick Google search tells me that Bush herself has acknowledged the influence. Still, it was something of a revelation for me. I've always had trouble working up much enthusiasm for Bush's music. Realizing that I'm supposed to be appreciating it in the same way I appreciate Joni Mitchell helps a lot. As a result, I think I've enjoyed Bush's new album, 50 Words for Snow, more than I've managed to like anything else of hers I've heard. The twee, twangy little hook on "Wild Man" somehow seems much more charming when I can hear it as the descendent of the twee vocal hook on Joni's "Help Me." The slow, diffuse classical emoting on "Lake Tahoe" works much better when I can hear it as a cousin of the diffuse jazz emoting on Mitchell's Hissing of Summer Lawns. Earnestly precious gyno-pop for cerebral waifs; I can enjoy that.

If the similarities with Joni make it easier for me to appreciate Bush, the differences are interesting to think about as well. As that "Hissing of Summer Lawns" title indicates, Mitchell's cerebral waifery was always confessional, or at least realistic—meandering ballads exploring her own romantic counterculture entanglements or elliptically skewering the not-so-counter-culture.  As one of her most famous songs puts it "Blue/Songs are like tattoos." Mitchell's flights were always grounded; the spacey tunes anchored in skin and sex. That's a big part of her appeal, in fact—for a hippie goddess, she had a surprising rock star swagger.

Kate Bush, though, doesn't sing about tattoos. Nor, for that matter, does she sing, as Mitchell does, about "Acid, booze, and ass/needles, guns and grass." Instead, on this album she sings mostly (as the album title indicates) about snow. For instance, here's "Snowflake":

Now I am falling.
I want you to catch me.
Look up and you'll see me.
You know you can hear me.
The world is so loud. Keep falling. I'll find you.

We're over a forest.
There's millions of snowflakes.
We're dancing.
The world is so loud. Keep falling and I'll find you.
I am ice and dust. I am sky.
I can see horses wading through snowdrifts.

If Mitchell's "Blue" turns her song into the singer's flesh, Bush's "Snowflake" turns the singer into a dissolving precipitation; the self as snow. The contrast is even clearer on "Wild Man," a track that couldn't be much less wild or manly if it were trying (which it quite possibly is.) "They call you an animal," Bush intones, and follows it up by improbably referencing " the Kangchenjunga Demon," the spirit of a Nepalese mountain. "You were pulling up the rhododendrons," she insists with an atavism mannered enough to make David Bowie blush. When Joni Mitchell talked about her animal man on "Coyote" she was flirting with a real guy who worked on the real land, and whose doggishness means exactly what you'd think doggishness would mean, "He's got a woman at home/another woman down the hall,/He seems to want me anyway." Bush, in comparison, sees "Wild Man" as a synonym for "Anatomically Neutered Elves."

Mitchell's songs work with relationships, turning sweat and love and hate into smoky harmony. Bush turns away from that sweet funk to the purifying cleanliness of landscape. The song "50 Words for Snow," which literally counts out and lists 50 words for snow, is a kind of obsessive ritual plea for clarity. Joni dreams of people talking and copulating, world without end; Bush of a purified earth with people and their copulating nowhere in sight.

Hippies believed in each other. New Age believes in snow.