FAST FORWARD: Tape Cassettes Back with a Vengeance

They've been lame long enough to be cool again: here's a couple of cassette-recorded tracks to get your first mixtape started. 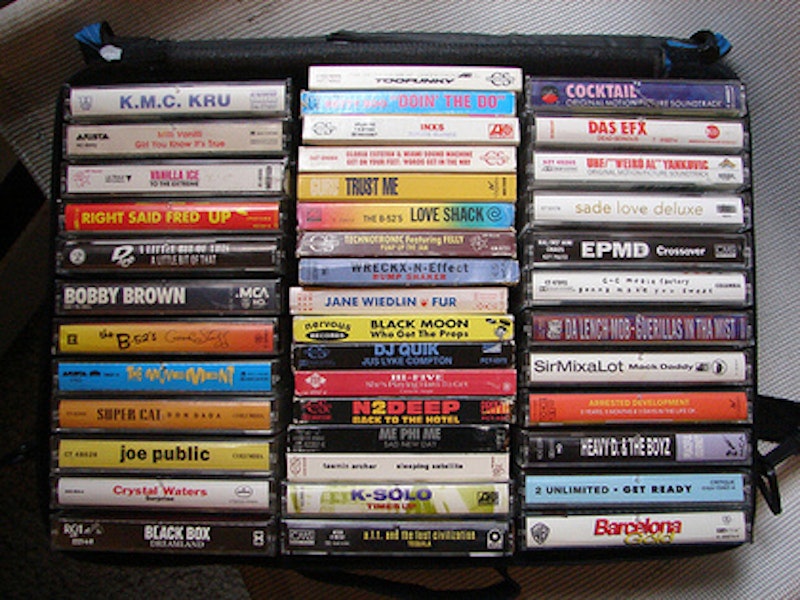 Wavves, "Side Yr On"

Bulking up on soul and funk material for an upcoming DJ gig has left me feeling burned out and in need of a musical shift. Normally I love the simplicity and effectiveness of two-minute soul anthems but recently I've been craving something more discordant. Or maybe blissful? In any case, something different. Conversing with friends and tapping the blogosphere has generated some positive results and one major underlying theme: Tape Cassettes! They're relevant again. While in no way reversing their downward spiral into obsolescence, tape cassettes are at least experiencing semi-resurgence.

They perfectly suit thrifty DIY labels and musicians trying to maintain a lo-fi aesthetic, as well as the more artistically inclined. Not that CD cover art is chump work, there just seems to be more active individual craftsmanship with cassette jewel cases.

Here's a list of some recent finds that might just convince you that tape cassettes are the new vinyl.

I've never been to the Jersey shore, but I have a hard time believing people who claim it's an appealing spot. However, if the locale has in any way inspired the work of NJ resident Ducktails, well, and then maybe I'll reconsider. Matt Mondanile, whose sic(k) moniker is sure to remind some listeners of their Saturday morning television back in the day, has released a strew of cassettes swirling together psychedelic, tropical beach vibes, and loopy patterns. "Daily Vacation" is an extremely pleasant late afternoon jam. With some cheap drum machine in tow, Mondanile lets off waves of fuzzy, foamy guitar riffs. The atmosphere the song produces is so warm and consuming that it'll take you dozens of repeat listens before you realize that the track doesn't really progress in any direction. It's content to drift aimlessly, and you'll be just as happy to do the same.


Wavves "Side Yr On"

Representing the other coast, San Diego to be exact, is the garage-rocking beach bum Nathan Williams, also known as Wavves. At the ripe age of twentysomething, he's got a feel for current noise and garage sounds (Abe Vigoda, No Age, Black Lips) but hasn't stopped listening to Nirvana and The Pixies. His self-titled release on Fuck It Tapes is messy to say the least. But it does feature some throwdown numbers, such as "Side Yr On." The track begins with Williams smacking his drumsticks, which actually doesn't make any sense considering he's the only member of the band and needs no rhythmic signal. The verses rib Kurt Cobain's intonation and then break off into a Doo Wop cooing chorus.

There are other songs on the album that extend the hypnotic soundscapes favored by Ducktails, thus proving that their upcoming split EP should be something to really look forward to.

Caves Caverns, out of Richmond VA, also have an affinity for surf jams but add a whole other layer of psychedelic space jazz and Sun Ra freakouts to the mix. When I contacted my pal JRuss, who mans the theramin and bass for the group, he shot me back the story behind the band:


I had played music with those dudes (Mike and JK) in private coffee-and-weed jams for the last three years, under different names that were just sort of imaginary foolishness, lots of hearing loss and a lot of fun, some names we had played as in our imagination and rough recordings:
DOOB SLICE
PHIL'S SPECTRE
STAY HIGH MOSES
JAMAICAN SHOWER

caves caverns is what mike and JK called on their pieces and it seemed naturally heavy.

"Tarrantino's Pizza," along with the rest of the seriously tight Subterranean River EP, is completely improvised, yet the track feels surprisingly organized for something so spontaneous and heavy. And as JRuss explains, the band's knack for filling space isn't without origin:

a handful of times in the summer/fall after JK's neighbors and landlord threatened to have him evicted, we would jam out underneath the 9th St. bridge, the James River on one side and a tin foil factory and a local brewery on the other side. It was a great place to "get free", to hear yr sounds echo across a massive concrete bridge and into a river."

Hailing from Washington D.C., Ingrid has built an impressive cult following considering they were a band for practically less than a year. They're self-titled tape is available on the brand new Cosmic Debris, a local (kind of) upstart distribution team run by some stand up guys. Their tag line for the band is incidentally a great introduction to the track above.

Two piece Mind-bending, soul-shifting, teeth-clenching punk from D.C. Former/current members of Mass Movement of the Moth, Des Ark and Danke. Ashley A's high pressure d-beat melds with palpating cardiographic guitar riffs akin to USAISAMONSTER, but with Joey D's signature flavor. Do not trifle with the songs on this cassette, or otherwise listen unprepared; a fate of becoming and remaining a prisoner of your own mind will become yours.

I feel like one of those way-too-serious musicphiles covering a band before they've even recorded a legitimate song. In this case, I have the inside scoop on the awesomely named ++ad Bones because they just so happen to be my sister Emma and her friend Danny. The folk-punk duo started jamming last year, the same time Emma actually started learning to play drums. In just a couple months, they managed to record a handful of songs. The Summer 2008 tape, as I've randomly (yet logically) decided to call it, ranges from banjo-led campfire sing a longs about cancer to more carefree 90s era rockers.

"Trigger Happy" is begging for a rerecording. The track sparks up almost immediately with an inviting guitar riff that would make it a perfect candidate for our upcoming Dinosaur Jr. Jr. tribute album: Songs that Sound Like The Band. Occasionally they let out enthusiastic shouts of "Everybody is a gun!" With a minute left, they let the tune build from the ground up, culminating in one last breathless dash. All in all, it's a great track that's asking to be played at full volume.

What a stupid song. That's the first impression you get from listening to "Powerful Sperm." And the Boston band's MySpace page makes it even worse. One can't help but feel embarrassed listening to the awkward Dynamite Hack, Mickey Avalon hybrid "Friends With Benefits" while looking at narcissistic Johnny's wall of boobs. But after a couple minutes of listening to the band use the same background ovation sample twice and burp in another song it becomes apparent that this is partially what tape cassette music is about. It's slightly tacky and cheap, exceedingly personal, and occasionally a riot.