Falling in love with the Bangles 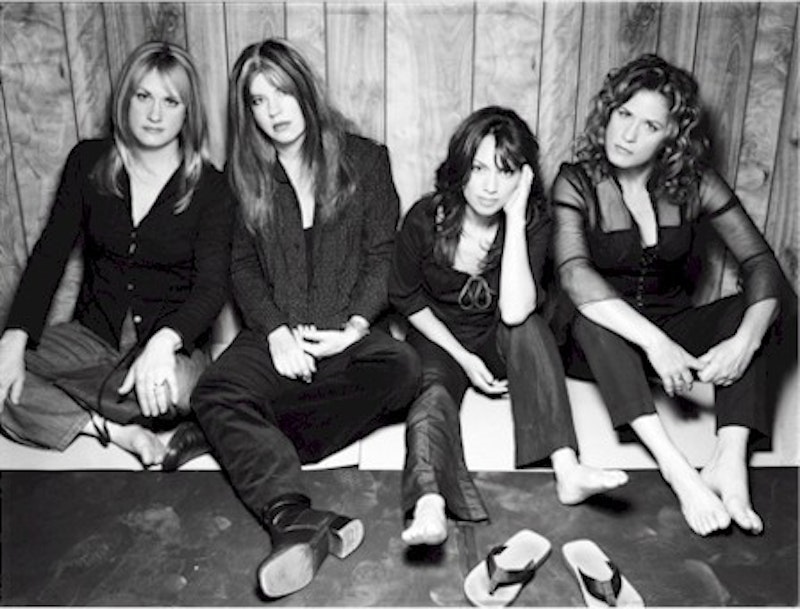 In the last five years or so I fell completely, irrevocably in love with the Bangles. I’d mostly hated them back when they were popular. At the time I was listening to classic rock and (to my shame) Billy Joel, and the cutesy ubiquity of “Walk Like an Egyptian” seemed intolerable. But, then, at some point, I admitted that I had a soft spot for those Beatles-smothered-in-cotton-candy riffs and harmonies…and then before you know it I had all three of their full-lengths and the Greatest Hits for the couple of extra tracks and the reunion album and am still bitterly regretting that their first self-titled EP is basically unobtainable.

That’s the point of pop music in some sense, though; it’s addictive. Not like heroin that’ll land you in prison with the cool kids, but like sucking down a bagful of jelly bellies and then feeling sick and ridiculous before going out and buying another one. And part of the addictiveness and the ridiculousness is, really, that it’s jelly bellies; they’re right out there. Everyone can do it. It’s not a subculture you can call your own; it’s pop—it belongs to everyone. The Bangles don’t give you any cred. Everybody loved them and that was the point, and now everybody’s moved on and if you still love them you’re either remembering your youth or (like me) you’re subject to a meaningless and harmless idiosyncrasy. The ingratiating hooks are there to be ingratiating. What else could they be for?

I don’t know if there’s an answer to that question—which is why a new album like Jaill’s That’s How We Burn is odder, in its way, than the work of actual purveyors of weirdo genius like Syd Barrett or of noise apocalypse like Xenakis. Statements like “I am an orange octopus with a hat,” or “AAAAAAAARRGGGGHHHHH” always make more sense than “It sure is hot out.” You need to be told about orange octopuses and tortured screaming, but small talk only tells you that small talk is occurring; it’s not actually there for informational purposes. It’s there to be friendly, which makes it somewhat redundant if no one is listening.

Admittedly, Jaill seems utterly unconcerned with such ontological problems. You’d never know that their chances of Top 40 success are somewhere south of nil as they blithely chime their way from one predictably jangly tune to another. Even the titles seem focus-grouped for radio apotheosis: “She’s My Baby” sounds exactly like a cheerful song called “She’s My Baby,” “Everyone’s Hip” is as anonymous as a world in which hipness is distributed in perfect equity throughout the population; “On the Beat” is like “We Got the Beat” if the Go-Gos took out everything that made the song popular and replaced it with randomly inoffensive bits from minor retro-60s cover bands.

Which perhaps gets at the reason why taking the popular out of pop leaves you not with underground geniuses who should be popular, but with some fairly boring piles of chiming nothing. The Bangles were always better songwriters than Jaill…but it didn’t hurt that after their debut, All Over the Place, they completely sold out. On Different Light they shamelessly picked up shiny new gimmick after shiny new gimmick in pursuit of the zeitgeist, getting Prince to contribute a song here, throwing in a whistled chorus there, using keyboards and studio musicians everywhere. Chasing the zeitgeist can be exhausting and futile, but it can also provide energy and even creativity. Hell, after the comfy repetitiveness of Jaill’s album, even the Bangles much-despised descent into gloppy AM radio balladry on “Eternal Flame” starts to look like a daring flirtation with the avant-garde.

Not that you have to have a huge audience to generate that plastic simulacra of life we sometimes call “art.” You can even work in a pop idiom, have no one listen to you and still be great (download Allure’s Patiently Waiting immediately.) But if you’re going to do that, it helps if you can make it look like you think you’re going to go platinum. If you’re getting up on stage just to say, “It sure is hot out,” you better have one damn seductive delivery. I can’t expect all my jangly pop to make me as happy as the Bangles, but I’d like it to at least try.