Everyone's Gotta Rely on Someone

An interview with Jake Brown of Glorious Noise. 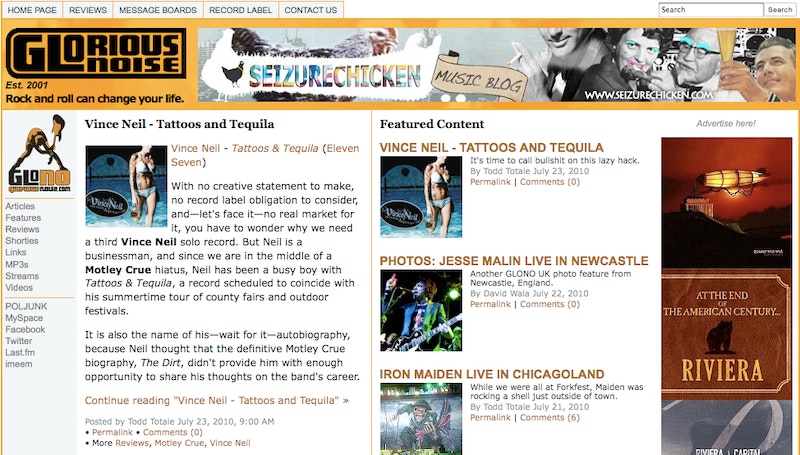 While it’s hard enough sorting through all of the press releases, mp3 singles and free albums that come my way on a daily basis, it’s harder still to find good reliable music coverage that tries to make sense of it all. For every new indie hopeful, there well could be 10 guys with Wordpress blogs just itching to give their two cents, and as much I think the more the better, very few of them seem to be revolving around my particular alt-folk-rock axis—what can I say, I just don’t give a shit about Grizzly Bear.

I don’t quite remember how I stumbled upon Glorious Noise but over the past couple of years it’s become one of my go-to sites for reviews, concert photos, obscure YouTube finds, and opinion that doesn't hold fast to the Pitchfork line. I recently talked to Jake Brown, one of the founding members of GLONO, via email.

SPLICE TODAY: Tell us a little bit about how Glorious Noise got started? What was the attitude like back then, was there a niche you thought needed to be filled?

JAKE BROWN: Glorious Noise started out as a place to publish the rants about music and pop culture that my friends used to email to each other. When Vanity Fair published the first version of its "Rock Snob's Dictionary," written by Grand Royal's Bob Mack, we all noticed that most of the references were things that we all talked about and listened to all the time. So we started a place for me and my friends to shoot the shit about the music we loved and bitch about the stuff we hated.

ST: Can you talk about some of the musicians you've championed over the years? The late Jay Bennett is an obvious one, Will Johnson another, can you tell us about a few of the others and why they've been GLONO favorites?

JB: The Mountain Goats is a biggie for me. I discovered them after we started GLONO, so it's kind of interesting for me to look back and see my fandom develop and mature over the years. Not everybody in the GLONO crew appreciated them, so I felt like I was trying to win them over, evangelizing, to show them the light. Which is a big part of the motivation for the site: to turn people on to good music. Another big part is to call out musicians and the industry when they try to pull bullshit over on their fans. One of our old taglines was "documenting the complex relationships between music fans, and musicians, and the music industry."

ST: I know you're a big numbers guy, always following sales and Billboard charting and the like, can you make some predictions for us over the next 10 or 15 years? What do you think are gonna be the big shifts in the music industry?

JB: Shit, I don't know anything about the future. I think that we'll see more established artists ditching labels entirely, but I think people generally undervalue the role of labels as a filter. MySpace, Tunecore, et al, is great for democratization, but the fact of the matter is that most of that stuff is absolute shit, and most of the stuff that isn't shit is completely mediocre. The amount of self-released stuff is overwhelming. We need a filter. Not just fans, but people who review music need a filter, too. Labels provide at least one level of a filter. But I think the major labels' percentage of total music sales is going to continue to get smaller and smaller. Independent labels will continue to cultivate trust, so people can feel confident that if something is coming out on Merge, for example, it’ll probably at least be worthy of streaming once to see if you like it.

ST: I feel like I've been asking this question a lot over the past few years, but what do you see as the place of music criticism these days? With the internet making everything faster, easier, more accessible—when someone can download the album faster than they can read the review —what does our job become?

JB: I think the job of the critic is to build trust with your readers. Everybody can stream or download anything they want, whenever they want, but people don't have time for that. I think there's still a place for looking critically at a piece of music and exploring what makes it work... or not work. There are far too few real critics on the internet. A lot of people writing on the internet truly believe that it's their role to promote bands. That's fine, and Glorious Noise does plenty of that, too.  But that's not being a critic. I think there's value in taking a closer look at the latest craze and letting readers know whether or not they should believe the hype. Then embed a YouTube video and let them decide for themselves.

ST: Who do you think are some of the most promising bands out there right now? Who are you really looking forward to hearing more from?

JB: "Promising" implies that they haven't reached their potential yet. I feel like a lot of my favorite bands have peaked already, and that bums me out. I really liked that Titus Andronicus album, and I think they could do interesting things in the future. But I've never felt the need to be on the bleeding edge of the brand new. Good music will still be good a year after it's been released. It's good to sit out the hype and see if things are still interesting after the hype dies down. The only bad part about that is you might miss out on seeing a great band in a tiny venue. By the time you get around to them, they're playing a bigger theater. Oh well. But whenever I don't have a current obsession, I go back and dig deeper into the past. Pull out that Carter Family box set, or download some Coasters off eMusic, or rip one of those classic Rhino boxes that I haven't digitized yet.

ST: I'm curious what music sites, blogs, etc. you read everyday? Do you still read Rolling Stone or MOJO or any of the older mags?

JB: I subscribe to MOJO and TapeOp. Online, I read pretty much anything that Maura Johnston writes. I read the headlines from Billboard, MTV, NME, Pitchfork, Lefsetz, Buddyhead, etc. I don't read a ton of blogs, but I follow a bunch of interesting people on Twitter who pass along lots of good stuff.