Elvis Was Never in the Building

If Elvis faked his death to become his own impersonator, then art also imitates life in the afterlife. 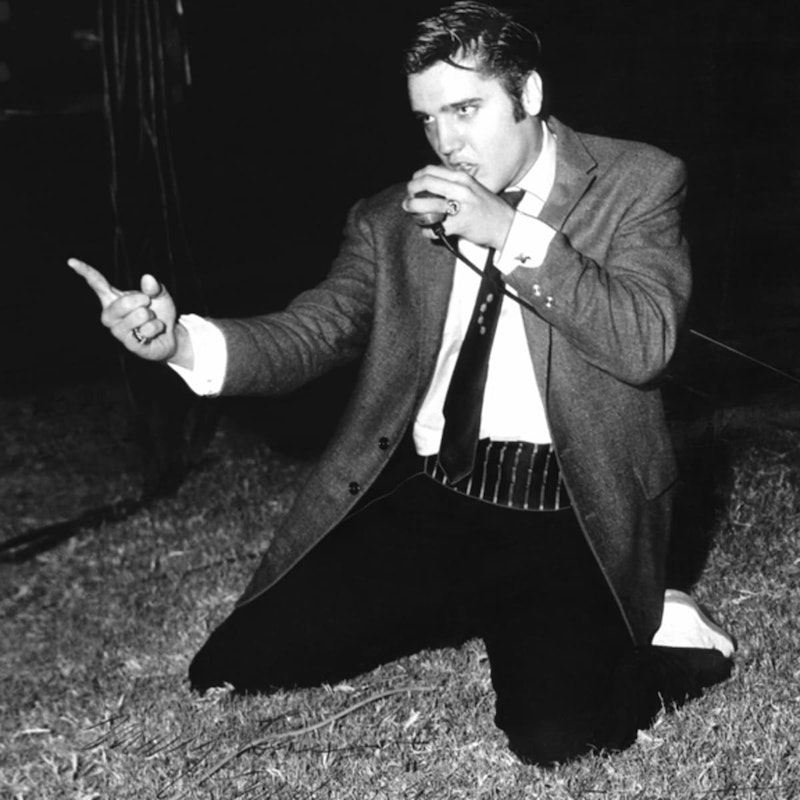 I was never an Elvis fan. He represented an oddity more than anything else. I like the song “Graceland” by Paul Simon and the rest of the album by the same name, but never fancied a pilgrimage to the tacky mansion. A mausoleum filled with gauche art, garish furnishings, and lowbrow hillbilly kitsch that passed for good taste. Making the trek to his plantation is still a must-see for diehard Elvis groupies.

I was born in 1956, the same year rock ‘n’ roll became commercialized. The invention of Elvis was a national sensation, as he appeared on Steve Allen’s show, and then Ed Sullivan’s really big show put Elvis on the map of the stars transcending the airwaves. Every cheap plastic, Japanese transistor pocket radio with an earphone was squeaking out the pablum. Every jukebox and 45 rpm platter cranked out a steady stream of rock, according to The King. The James Dean bad boy appeal, versus the boy next door, Tab Hunter, of California teen dream surfer imagery. Will success spoil Rock Hunter? A career in sensationalism and tabloid exploitation.

The televised appearances propelled Elvis’ reign as the King. Something mammoth like the Beatles but country-fried, with a hunk of old-timey greasy religion. Those trademark obscene pelvic hip thrust gyrations were merely a result of the jitters, a nervous butterfly stage fright leg twitch. He appeared to be the impromptu devilish corrupter of impressionable white kids across the country. At the same time, a safe family friendly rocker that concerned parents might or might not tolerate. The great white hope singer that ripped off black singers. Legends like Little Richard, Chuck Berry, James Brown, and Fats Domino, and many others. Elvis portrayed a squeaky-clean image of purity for whites. Like Pat Boone singing Little Richard’s “Tutti Frutti,” but more prefab, hip whiteness. Big Mama Thornton’s “Hound Dog” meets Led Zeppelin’s ‘Whole Lotta Love,” while Mick Jagger does the Hip Shake Baby. A little whitewash history for the kids.

All the fuss surrounding Elvis was generated by his savvy business manager Colonel Tom Parker. A Southern “gentleman.” The cornpone hick shtick garnered and groomed his sole client, Elvis, to unimaginable heights. Col. Parker received 50 percent of everything. This manipulative mogul controlled every aspect of Presley’s life and career. Elvis was an invention of the music industry that shunned race music, yet wanted the moolah it generated. Elvis ruled. He was the king of something larger than a hit song factory pumping out platinum gold, making a number one slot through radio payola and clandestine, behind-the-scenes crooked angles. He represented something dangerous but at the same time cuddly. The songs are sung and it’s only business. And taking care of business was killing the King.

If you follow the musical bouncing ball of Elvis’ trajectory into the stratosphere, look no further than Dr. Nick, the personal pill-pushing private physician to Elvis. The usual prescription order was a fill-in-the blanks laundry list of every opioid narcotic, sedative, and amphetamine cocktail known to modern medicine. Elvis was a legal junkie. In fact, when the autopsy was performed after 1977 death, no less than a dozen lethal combo doses of all these various pills were found in the blood test results. But that's normal in the biz. Elvis died while sitting on his throne, the private toilet of his Graceland bathroom. His fiancée, Ginger, told him, “Don’t fall asleep in there.” He replied, “I won’t.” Hours later, she discovered him dead, slumped on the porcelain gold plated bowl with his pants down around his knees. Chronic constipation, drug addiction, and morbid obesity was part of his legacy. All the crappy whirlwind surrounding his life was put to rest. If Elvis faked his death to become his own impersonator, then art also imitates life in the afterlife.