Lindsey Buckingham's latest album is pretty good and all, but it can't match the drug-fueled mania of his best work. 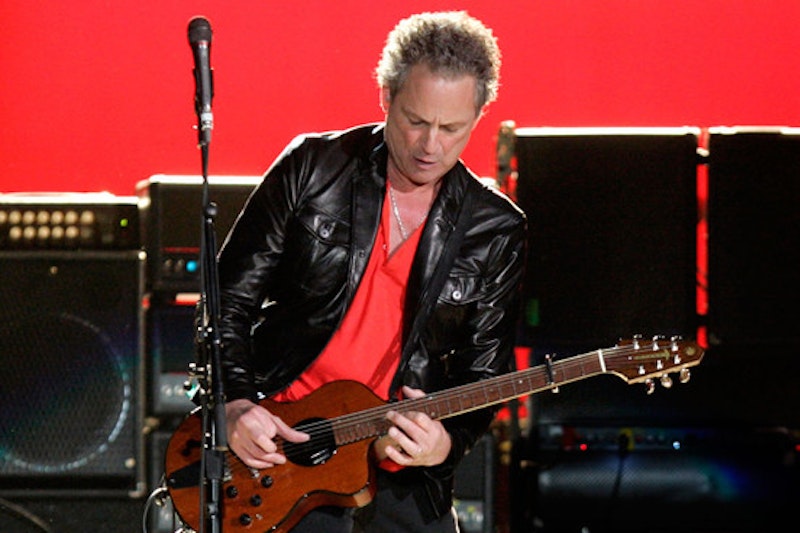 Fleetwood Mac is firmly associated with middle-of-the-road 1970s radio rock. In addition, every song Stevie Nicks has ever written meanders into the same plodding New Agey groove. And, in addition to that, Christine McVie writes extremely accessible melodic pop. Put these factors together, and the result is that if you’re not watching for it, it’s possible to listen to Fleetwood Mac and miss the fact that Lindsey Buckingham is completely fucking off his head on cocaine.

Buckingham’s spastic is-he-really-not-well-or-is-that-genius is on display throughout Fleetwood Mac’s oeuvre. You can see it most consistently on 1979’s Tusk, where on songs like “What Makes You Think You’re the One,” Buckingham alternates between shouts and whispers while the music staggers along like a constipated calliope being buffeted by high winds.

But if you really want the full force of Buckingham’s chemically-induced derangement, you need to check out his first couple of solo albums. Law and Order, from 1981 is one of the most freakishly ADD albums in existence. Buckingham’s hindbrain spends the entire 36 minutes trying to crawl out through his nostrils. The first song, “Bwana,” starts with jungle noises and a hint of bongo before that’s abandoned and we get Buckingham shouting, mewling, and yodeling up and down his range almost at random until the back half of the song gets into what sounds like a series of raucous kazoo solos, because jungles are well known for kazoos. Other highlights include a slowed down, cabaret-singer-on-a-bender version of “September Song,” and “That’s How We Do It in L.A.” where Buckingham spits bile so enthusiastically he appears to be in danger of burning a whole through his tonsils. The whole thing has a queasy fey energy, like a truckload of fairies strung out on… well, strung out on cocaine.

Go Insane, Buckingham’s next album from 1984, is his New Wave exercise, which makes it marginally more stylistically grounded. It’s still pretty nuts though, with drum loops jerking as Buckingham uncorks spiky guitar blasts that scrape and wail and wander into the corner to die. On the title track, a chorus of multi-track Buckinghams intone menacingly about his loss of mental health. It’s the music Hal from 2001 might perform if he were to ingest a staggering amount of coke.

In light of these predecessors, Buckingham’s just released latest effort, The Seeds We Sow, is surprisingly restrained. Specifically, it’s an entirely decent collection of polished tuneful folksy tunes, with mesmerizing guitar playing. At times it seems like he’s turned into Sufjan Stevens or Devandra Banhardt—and in so doing, he demonstrates convincingly why classic Lindsey Buckingham was a much, much more entertaining performer than Sufjan Stevens and Devandra Banhardt put together. Fey and pretty is okay, but fey and batshit crazy is better.

There are some signs of the old Lindsey. “Rock Away Blind,” for example, shifts dynamics in a way that suggests the manic dementia of old. “End of Time” has an over-carbonated drumbeat threatening to bash its way out of the lyrical guitar line and catchy chorus. “One Take” sounds like it could be a Tusk outtake.

Best of all is the electric version of “Seeds We Sow.” For the concluding track on the album, Buckingham abandons the drifty hippie persona, and uncorks squiggling keyboards, unhinged multi-tracked choruses, and pilled-up drums. The song is a burping, staggering, quivering mess—finishing up with a totally badass rock star guitar solo. Eat your heart out, Eddie Van Halen.

So the man hasn’t exactly lost it. Still, Seeds We Sow comes across as a serious album with bizarre touches, rather than as a catastrophic train wreck. The set is anchored by a number of definitively pretty songs—“Gone Too Far,” “End of Time,” the acoustic “Seeds We Sow”—which suggests that Buckingham has some vague interest in entertaining his audience rather than being primarily focused on tearing the bugs out of his own skull. Seeds We Sow is a really fine album—better than anything Bob Dylan or Neil Young has done for the past couple of decades. But it’s doesn’t scale the pinnacles of cracked sublimity the way Buckingham used to.  Maybe he’s just not as young as he used to be. Probably, though, it has something to do with getting off the coke.