A little contemporary ear-bleeding country in anticipation of the legendary group's new record. 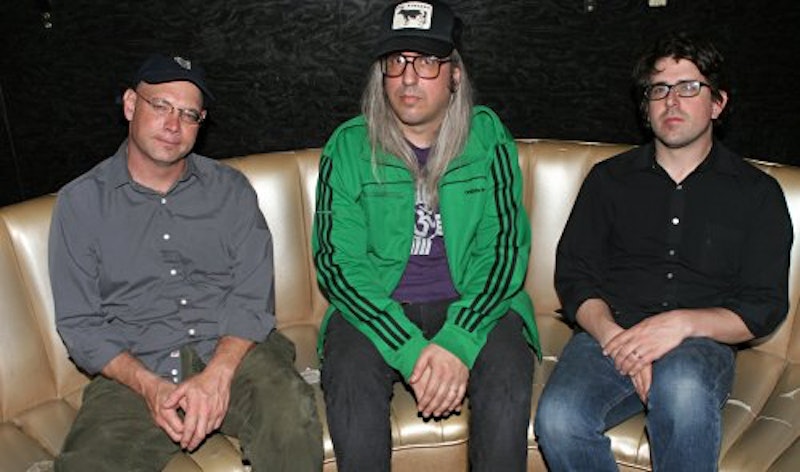 Raincloud Straight to You

Come in from the Cold

It was revealed last month that all three original members of Dinosaur Jr.—J. Mascis, Lou Barlow, and Murph—were back in the studio applying the finishing touches to the band's first album since 2007's Beyond. Surely this news warrants some kind of celebration. But instead of the usual routine of skimming through the group's catalog to select various tracks that remind us how influential they are, I thought we'd be better served to see this inspiration in action. For the past couple of months I've been vainly bogarting several excellent songs that recall Dinosaur Jr. and other 90s-era groups that sought to find a middle ground between grunge-metal and tender-hearted jangle pop. None of these songs are covers. But the sound and influence is unmistakable.

"Oh Well" is without question the most convincing Dinosaur Jr. impersonation you'll ever hear. But what makes the song even more fascinating is that it's a complete anomaly in relation to the rest of this Virginia band's 2004 album Warps Yr Head. Following the breakup of Pg. 99, brothers Chris and Mike Taylor joined with Michael Whitman and Johnny Otter to form the hardcore, grunge-inspired outfit Mannequin. The sound on their Reptilian Records release was exceedingly heavy and disorienting, with the exception of one surprisingly poppy number in the very middle. There are literally zero signs on the first three tracks of Warps Yr Head that prepare the listener for the more mainstream structure of "Oh Well," which leads me to believe that the song exists more as an original homage to grunge-rock than a simple continuation of the album. In under two minutes, the track somehow manages to replicate every defining detail we associate with that Bug-era sound, from the barrage of fuzzed out monster chords, to the subdued, affected vocals, and even a song-capping guitar solo that matches with the best of the Dinosaur Jr. catalog. Think "Freak Scene" redux.

Joseph Liddy and The Skeleton Horse, "The Ballad of Joe Hill"

Don't know how I stumbled across Joseph Liddy and The Skeleton Horse but, fuck, I'm glad I did. This band from Queensland, Australia is still unsigned but that shouldn't last too long when they're churning out songs like "The Ballad Of Joe Hill." Like Mannequin, Joseph Liddy and his compatriots project a sound that's more rooted in punk than classic guitar rock. Liddy shouts out his lyrics in a strained tone, which adds a layer of grit to the fairly melodic wall of guitar filling in the background. As I'm a sucker for guitar-driven numbers, that's really the first element that jumps out at me when listening to this track. It might be the only thing resembling Dinosaur Jr., but it sure doesn't disappoint.

Head Home, "Raincloud Straight To You"

Head Home comes from the Baltimore suburbs carrying a backpack full of early 90s rock nostalgia and a particularly heavy heart. If Dinosaur Jr. is somewhere within the spectrum of "speed metal and wimpy jangle rock," as Lou Barlow would put it, Head Home focuses on their more melancholic tone. There is an attempt to capture the same moving indifference in Mascis' vocals and, as usual, guitar solos play an integral part in the composition. I don't think the song holds too much weight on its own—the overall sound feels kind of rushed and a tad bit sloppy—but it proves to be an admirable attempt to recreate a sound that was clearly a prominent influence in the lives of the band members.

Sleepwall "Come In From The Cold"

Sleepwall is a band from Brooklyn, which means that they'll either hit it big in the next few weeks or be forever lost in the absolute throng that is the Brooklyn music scene. I don't know a whole lot about this band's history nor does it really interest me since the majority of their songs that I've listened to are unremarkable. But "Come In From The Cold" does a good job of salvaging that reputation. From the opening chords, it's clear that this track would feel right at home with the first half of Where You Been. The group vocals are washed away in the guitar but it's probably for the best. All that's missing is that final minute, distortion-filled solo, like on "Start Choppin'," but it unfortunately never emerges.

Here's one for the older folks and that one reader who left a comment the size of War and Peace at the mention of Swervedriver reissues. Edsel Auctioneer were grunge era contemporaries from Leeds, England. The Dinosaur Jr. Jr. tag is completely out of place here, but I suppose it's no less awkward than opening up a Sonic Youth playlist on Pandora and seeing My Bloody Valentine followed by Neutral Milk Hotel. I assume the My Bloody Valentine playlist is just Sonic Youth, right? "Our New Skin," which was the band's first single recorded for Decoy Records, is a gorgeous, shoe-gazey melody with some rough edges and a lively pulse. At the end of the number, Chris Cooper really sinks into the drum kit, resulting in a ferocious final minute. If you're craving more Edsel Auctioneer, definitely check out this live performance as well that was broadcast on the BBC2 back in the late 1980s.