Hitting up record stores and garage sales all over Charm City. 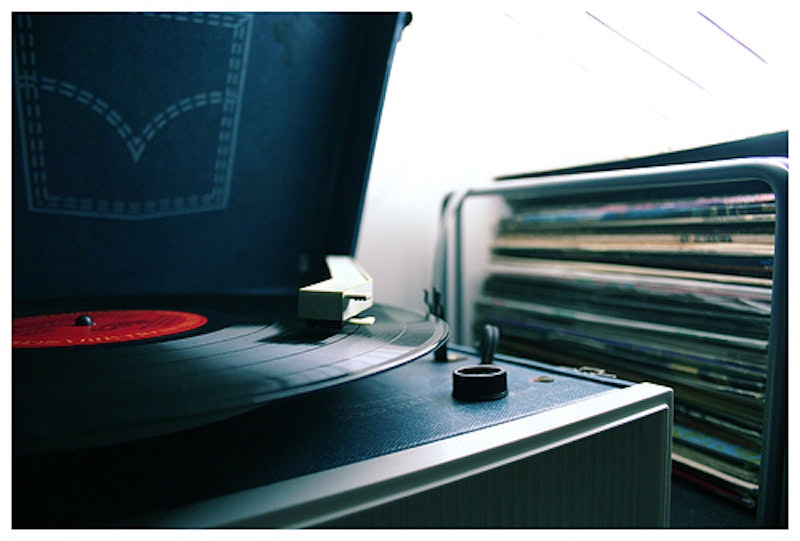 Oslo In The Summertime

Digging for records is pretty much my favorite drug, and I'm pretty good at it, but the real truth is, it’s just not hard. Get up early, go to flea markets, dig through every record at the thrift store, check out garage sales and estate sales—and you'd be hard-pressed not to find some great rare records for nickels on the dollar. You've got to be careful though, because at a certain point the quest for records can consume you; working in record stores, I've seen the type. They are invariably quite sad, old, white and lonely.  Anyway, the whole point is, these guys love to brag about what they've got, but are loathe to mention where they found it or why they looked for it in the first place.

For me, there’s no better way to meet interesting people, and see as many out of the way places as possible, than to scour the Internet for information, and get up at seven a.m. and get in the car with a wad of cash. If that doesn’t sound like fun, you may want to stop here. This column, which I intend to turn into a recurring series, will basically be blow-by-blow accounts of my abject record nerdiness.

A few weeks ago my (extremely cool and beautiful) station wagon and I made it down to Baltimore, for a week of writing at the Splice offices and cut-rate revelry with managing editor Andrew Sargus Klein. Being (to put it kindly) part-time self-employed, I was on a rather tight budget, and was trying not to spend more than what I was making writing a couple of articles; i.e., not very much.

That’s why it was nice that the first batch of records I came up on were free, courtesy of Splice founder Russ Smith. It was an interesting assortment, from Tom Waits, Neil Young and The Cure to a Bob Dylan Basement Tapes LP, Woodstock Revisited, that Russ said he bought while undercover in the liberal enclave of Berkeley (at Rasputin Records, the forerunner of Amoeba). In deluxe bootleg fashion, it’s pressed on marble vinyl, and includes this scorching alternate version of “I Shall be Released”:

The most surprising of the records, though, were the trio of mid/late 1970s LPs: Augustus Pablo, Bunny Wailer and Rita Marley. I don’t know whether his decision to grab these out of the basement says more about Russ’ eclectic taste, or what he thinks about me. Either way, thanks again, Russ.

Unfortunately, upon bringing the albums home, Andrew’s somewhat dilapidated receiver decided to function nevermore, joining the speakers—that looked like they were ripped out of a boombox—on the list of essential stereo items that needed immediate replacement (the turntable was fine!). After work the next day, he decided to take me over to True Vine Records where they sell/repair stereo equipment, and have a modest, but excellent selection of used records. I’d certainly recommend it, and found they had the rare combination of good, cheap records and really nice, fairly priced expensive records. If I wasn’t so broke, I could’ve easily dropped a couple hundred dollars and felt like I got a good deal, but alas I can’t spend $30 on the only Otis Redding LP I’m missing, even if it’s worth $50. I was able to show some restraint and with a small fraction of the pile I amassed—a few doo-wop LPs (Dynamite Doo-Wopps Volume 7, Maurice Williams & The Zodiacs), two jazz records (Cannonball Adderly’s Soul Zodiac and George Russell’s Othello Ballet Suite) and one of the newer Mississippi Records releases (Reverend Louis Overstreet’s His Guitar, Four Sons and the Congregation of St. Luke’s Powerhouse Church of God in Christ). Andrew also found what he was looking for and purchased the Harman Kardon receiver straight out of the listening station, a bargain at $80.

Halfway home on the mission to resurrect his stereo, we turned to a precious, but perilous digging resource, Craigslist, to look for speakers and garage sales. After a flurry of emails and few responses, Andrew found a pair of Sony speakers for $40, and I had half a dozen garage sales and flea markets to attend.

I’m not sure how many of them are recurring, but if you’re interested at following up on any of these, you can do the same thing I did—type “records” into search field of the garage sales section of Baltimore’s Craigslist. While this is a somewhat foolproof method, it also requires you to get up early, because there are invariably a few other people trying to do the exact same thing. That having been said, I slept through my alarm at seven a.m., but don’t really think I missed out on much by getting a start closer to nine. If there had been someone else to flip through the records before me at my first stop, they’d have been remiss not to pick up an original, mono copy of James Brown’s legendary Live at the Apollo LP. It was just 25 cents, and is worth more than what I spent on all the records I bought the entire week. Not a bad way to start the day, and despite being somewhat obvious (the greatest thrills are the unknown rarities you take a chance on), it was without a doubt my best Baltimore find.

From there, I hit a couple of other forgettable flea markets before I made it out to one at 8201 Cloverleaf Drive in Millersville. The show had the least vendors of all of them, but in the corner I noticed a few stacks of 45’s. I ended up with a pile of about 30 of them, most of which weren’t in sleeves, or particularly good condition. I told him I’d like to pay five dollars for all of them, and after he hemmed and hawed a bit (and pulled out three of them, including one Bo Diddley 45 he decided not to sell) he agreed, and explained that they came from jukeboxes he restores – and that he’s got more than he knows what to do with. He asked if I was also into LPs (!), and promised to bring down some gospel, blues, jazz and soul (as per my request) in the following weeks, but he could only carry a few boxes at a time. I probably won’t be back in the area soon enough to take advantage of that, but it certainly seems like a spot worth following up on.

The last two record stores I visited represented opposite ends of the used record store spectrum. Normal’s is also a bookstore, and has the sort of diligently alphabetized selection that some people prefer. I don’t normally walk into a record store with a specific agenda, so sometimes I prefer the cluttered, diamond in the rough type places over the “We know where everything we have is and precisely what it’s worth” establishments, but in Normal’s case the organization works. I didn’t find anything I both wanted and could afford, but they had a lot of really nice (again expensive, but fairly priced) jazz and a reputation for coming upon rare African LP’s. It seemed like they had decent turnover as well, and if I lived in the area, I’d try to make it a point to stop through there every time I had a $20 bill in my pocket. El Suprimo, on the other hand, I’m not sure I’d return to. The owner there was clearly in the “pile records everywhere” camp, and while I don’t mind that, I do get a little annoyed with the “don’t price anything” scheme.

I have around a decade of used record store experience, and find it hard to believe the owner doesn’t have time to go through a stack of records, and use his intuition to price everything before it goes on the floor—even if he doesn’t trust his staff to do so. Short of price-tags, my expectations are at least that I’ll be able to take a record to the counter and be told a price without the clerk having to call the owner, who then has to take 20 minutes to look everything up on eBay and give somewhat condescending explanations for his pricing decisions. Ironically, I offered $10 for the small stack I was carrying, and the price quoted me after the frustratingly long ordeal was $11. The stuff they had there wasn’t terrible, but with many other good record stores as there are in Baltimore, I might avoid this one on principle—which may or may not make me a snob.

I missed out on a few stores I wanted to check out, like Own Guru and Dimensions in Music, and didn’t get to many thrift stores (though I did strike out at Goodwill), but fortunately for you and me, that’s more than enough of an excuse for a return visit.