Crystal Castles Talks About Breaking Through, Only Sort of Makes It Work

But we can still thoroughly respect the effort. 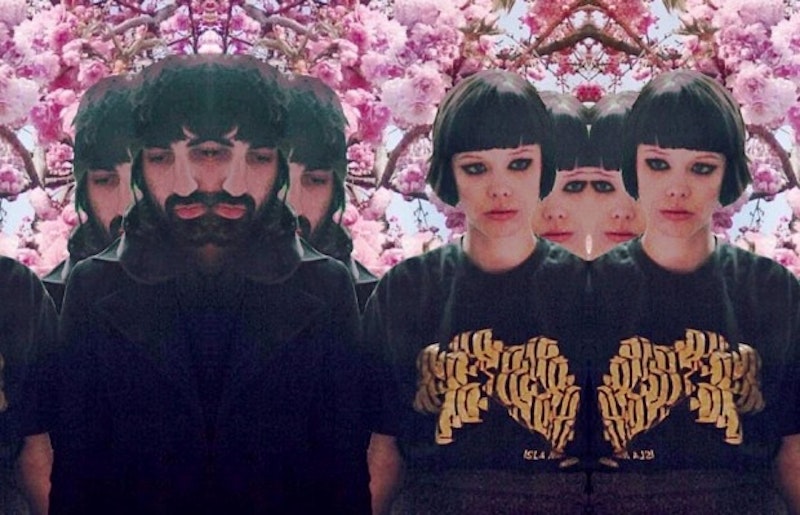 Crystal Castles can be an arresting live act. Having attended one of their show's shortly after the release of their first album, I figured that whatever they would mature into would have to sonically top their histrionic, strobe-lit and epileptic stage presentation—that or move as far away from it as possible. Appropriately, there was a fair level of interest generated when the band announced that for their new record, III, they had relocated to Warsaw and were reconfiguring their sound by avoiding the use of laptops.

In interviews before the album’s release, singer Alice Glass had hinted that she had more or less embraced modern Middle Eastern conflict as her muse. It's an odd claim to make, fortunately the record starts out strong if not militan; "Plague" stretches beyond its initial techno-isms with shrill screams and foreboding synth organ stabs. “I am the plague,” singer Alice Glass confesses as the track is diverted into an unexpected ambient bridge. Likewise "Kerosene" is remarkable for its pairing of pitch-shifted layers of Glass’ vocals with rapid-fire arpeggios. However, after these first two tracks the album seems to quickly run out of steam—primary vocals and their supporting layers become increasingly indecipherable; the same synthesizer patch is used over and over in the same quarter note pattern.

When Glass’ vocals actually come through in the mix it's a disarming moment. She sounds genuinely disaffected and free of irony even when delivering lines like, “I’ll protect you from all the things I’ve seen.” Producer Ethan Kath shines when he focuses on textures and foregoes obvious melody. "Pale Flesh" has a slippery beat but the novelty fades when the main vocals cross over into the Grimes-school of breathless vocalizations, a grey area where words are employed to both mine the cultural zeitgeist and evoke authentic experience.

The album does eventually snap out of its formless electro house and move on to more interesting sonic fare. Parting track "Child I Will Hurt You" leaves a lasting impression, in the center of the Venn diagram of Phillip Glass and Aphex Twin circa-Ambient Works. It is a moment that feels so brief yet says so much that it has the unintended effect of making the majority of the album’s tracks seem weak by comparison. And it raises the more tedious question of why so much of the album sounds like Crystal Castles trying to avoid sounding anything like Crystal Castles.

As with most turning-point records, III immediately fails if you regard it in the terms that it was hyped by. However, that the material presented approaches greatness with a bit of an aborted trajectory actually turns out to be its saving grace. One can conclude that its creators asked an awful lot of themselves and came out a bit gun shy in the end. Given what did make the record, one can’t help but suspect that there exists a longer cut with much more experimental fare. Revisiting earlier elements of their sound may have more effectively brought to life the feelings of authentic conflict and surrender that serve as the album’s thesis, while proving that the band has a right to be comfortable in their own sonic skin.