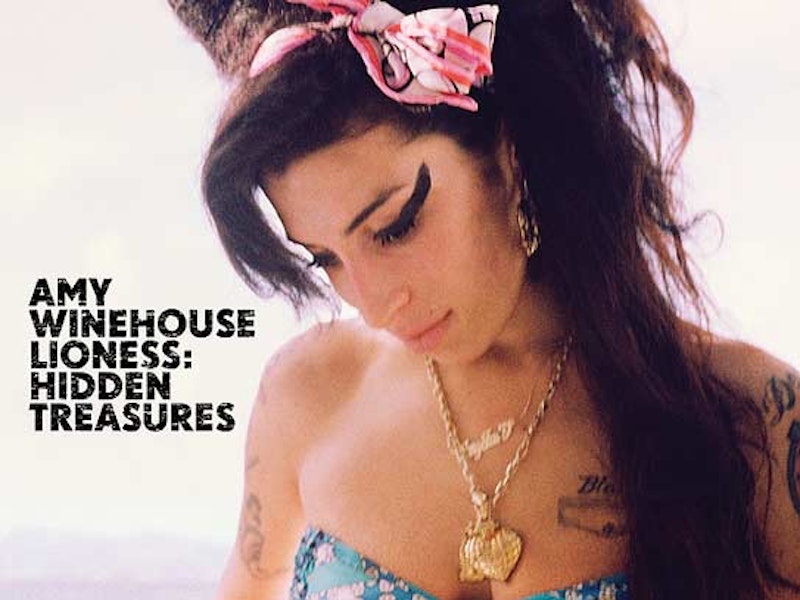 There's something queasily right about Amy Winehouse's posthumous album Lioness. Winehouse's old school mystique was always about walking in familiar shoes off a familiar cliff. "They tried to make me go to rehab/I said no, no, no," she declared on her most recognizable hit "Rehab," as the commanding R&B backing conjured up images of stars-who-had-to-go-to-rehab-past. Winehouse no sooner stepped into the public arena than her dead pool started. She was an obituary almost before she was a headline. Given that, it almost feels like all her albums should have come out after her death; it's only a mistake of chronology that allowed her to release anything while she was still breathing.

Whatever discomfort one might feel, though, there's certainly a lot of good material here. On her final farewell, the famously tortured singer does what she always did, lending her miraculously retro throat to tastefully retro arrangements of old standbys and new standbys.  A slow, burning take on "Wake Up Alone" drips with languid pain; the line "least I'm not drinking" is particularly bitter given the singer's death by alcohol poisoning. "Will You Still Love Me Tomorrow?" turns the girl-group tune into a deep-soul weeper, little-girl worry transformed by Winehouse's knowing vocals into world-weary knowledge. In "The Girl From Ipanema," the singer joyfully scats and riffs, treating the fluffy novelty tune as meaningless, joyous sound.

The album also has its share of wince-inducing moments. Chief among these is Nas' hey-she's-dead-but-I'm-still-a-playa verse on "Like Smoke," which adds nothing to either his legacy or hers. And then there's the pat fade on the final tune where we hear Winehouse talking earnestly about the tortured soul of her idol Donny Hathaway. "He couldn't contain himself; he had something in him, you know?" It's moving because Winehouse was tortured too. Get it? Even a lovely "Body and Soul" with Tony Bennett takes on uncomfortable connotations as Winehouse does an eerily accurate Billie Holiday vocal, one dead, tortured artist impersonating another.

But even these moments of unintended crassness or over-intended profundity aren't nearly as incongruous as you'd wish they were. They're just the mark of the market, and Winehouse was always a creature of commerce. That's not just because she was a pop star, but also because her entire persona, her authenticity, was built on appetite. She became a star by replicating rituals of outsize desire, whether for love or for drink or for drugs. When she sings on "Between the Cheats," "I'd die before I'd divorce you," the fact that she’s dead doesn't change the song's experience so much as fulfill it. Everyone knew where Winehouse was headed; it was that destination which validated her. She was the heir to Billie Holiday or Etta James not only because she sang in their idiom, but because she was strung out and desperate just like them. Her needs as well as her voice mirrored theirs.

Lioness raises Winehouse from the dead and sets her out there on iTunes to go through her moves one more time, a hungry, emaciated zombie simulacra of herself—which, physically, was exactly what she looked like towards the end of her drug-ravaged life. The depressing part isn't that the album defiles her memory, though. The depressing part is the suspicion that she hasn't been. Winehouse was always about the nostalgic need for nostalgic need, the joy of ritually repeating the ritual consumption of ritual consumption. She was a fetish of excessive want, her listeners cannibalizing the image of her self-cannibalizing corpse.

Winehouse may be gone, but that image is still around. It's perhaps appropriate here to mention that, despite their reputation, lions tend to prefer to eat already killed meat; they're more scavengers than hunters. If Winehouse is a lioness, then, it's not just because she was noble or queenly. It's also because, for our enjoyment, she was feeding on her own appetite.