What can even be said about Common’s tragic fall from urgent artistic voice to corporate shill? 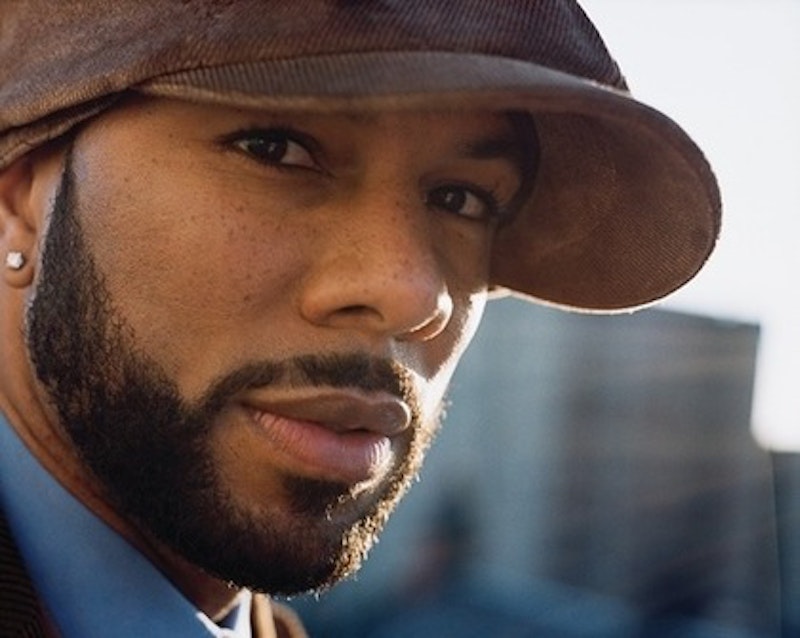 The Tanakh teaches us that after surviving the torrential cataclysm set loose upon mankind, Noah got blind drunk and passed out, unclothed and inebriated, in a ditch. His loyal and loving children, ashamed of their father’s nakedness, throw a blanket over him and leave him to sleep it off—save for his wicked son Ham, who first takes occasion to mock his sire’s lack of modesty. Awakening and realizing what Ham had done, Noah damns the descendants of his profligate child to basest servitude till the end of days. Noah is a great man, beloved of the All Mighty, savior not simply of mankind but of the entire ecosphere. To deride him for his moment of weakness is a lowly act, and one which Ham is justly condemned for.

I recommend keeping this lesson in mind when considering the recent career of once-legendary MC Common.

During the 1990s and into the early years of the new millennium Lonnie Rashid Lynn, Jr, aka Common, formerly Common Sense, definitively established himself as one of the leading lights of the underground hip hop movement. Working with a long list of luminaries Common earned a reputation for rhymes that were complex and personal, a far cry from the gangsta rap which was dominating radio and the media’s attention. His classic 2000 release Like Water For Chocolate, produced by frequent collaborator J Dilla, stands out as a masterpiece of the genre and marked the beginning of Common’s rise to marketable star. He is widely considered, by fans, critics and within the industry as among the better MCs to ever grasp a mic.

So in memory of his greatness I held my tongue when Common spent the latter half of the aughts laboring under the bizarre misconception that John Mayer was anything but a festering pile of adult-pop garbage. I kept silent when his last album cover looked like he was auditioning for a spot in Jem and the Holograms. I even turned away while he prostituted his innate charisma for the greater glory of The Gap, the retail equivalent of the Council of Conservative Citizens.

But there’s a difference between a moment of weakness and a sustained slide into mediocrity; between shedding your clothing in a drunken fit and joining a nudist colony. At a certain point, one has to look in the mirror and realize, Tina Turner-style, that those bruises didn’t come from falling down the stairs. So for me, and for all of the many hip-hop fans who have had to suffer through the last half-decade of abuse, I can only ask…

Common: What the fuck?

My “What’s Love Got to Do With It?” moment came the other day when Gmail, fulfilling its corporate big brother function of reading my email and trying to sell me things, linked to an interview with Common in—I shit you not—Advertising Age magazine. In it, Common discusses partnering with Microsoft and The Zune (they still make them, yes) for his upcoming tour. Those with weak stomachs might want to skip the following block quote:

Microsoft is classy, it's a timeless brand, and it means something to the world, internationally, and I felt like that's the direction of what I want Common to be, to be honest. I want to be timeless, I want to be international, and those are the things I feel like I'm working toward now.

Later on, in response to the interviewers asking whether he and Microsoft’s goals coincide, Common answers

You can take a minute if you need to.

It isn’t just the desperate over-commercialization, although you don’t exactly have to be Joey Ramone to feel uncomfortable being exposed to such an excessive display of corporate ball-tonguing; it’s the bizarre distortion of speech, the disjointed aping of honest methods of communication. Common: this habit of making vaguely spiritual pronouncements while obsessively marketing every aspect of your image is unattractive when Sting does it, and the world doesn’t need another Sting. I can appreciate how spending the formative years of your career watching less talented artists get rich must have rankled you, but Microsoft? Really? There wasn’t, say, a heavy arms manufacturer you could pair up with? The RNC wasn’t interested in paying a brother to spit a hot 16 about the evils of wealth redistribution?

With the possible exception of singer/songwriter, no musician’s role relies so heavily on credibility than an MC. The listener is essentially receiving the distillations of your running inner monologue, and if that narrative is false your audience will surely know—maybe not over the course of a verse or track, but certainly over an album. Common was never the most talented lyricist, and there are MCs possessing a more dominant flow, but he always seemed ingenuous and authentic, his music an outgrowth of honest struggle. The pop-star persona Common has adopted in past years is so comprehensively inhuman that it would be impossible to generate any wisdom or insight from within it. Perhaps this is why his most recent work has been so disappointing.

Come back to us, Common Sense. Come back.