The ripping guitar solo—the kind that was within itself an ends as much as a climactic build-up—has become somewhat passé.  Here’s to its return someday soon. 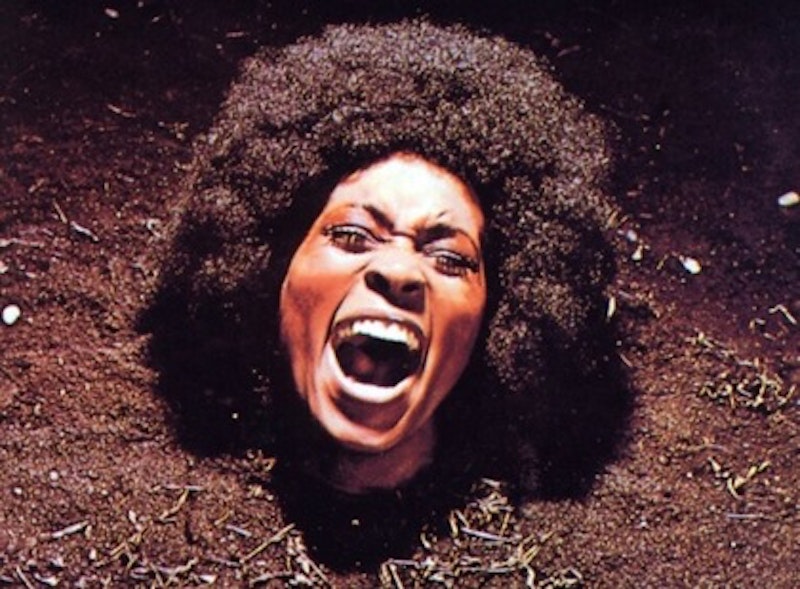 If you’re a dedicated music listener, you can still find guitar soloing for the sake of itself. Take, for instance, the self-imposed stasis of metal. The classic metal formula has become almost as set as the 12-bar blues, and there will therefore probably always be long-haired dudes in stone-washed jeans shredding away the same old way. But I am talking about the more progress-oriented world of rock, in and immediately around the public eye. Within this wide swath, the autonomous guitar solo has gone through something like insular dwarfism, shrinking in grandeur and dramatic gesture as practitioners become more isolated, and continuously dwindle in number.

But the self-justifying guitar solo is something great, and I don’t want it to die out. For this reason I was very excited by Nels Cline’s guitar work on Wilco’s Sky Blue Sky, and I am looking forward with hope to the January 20th release date of John Frusciante’s The Empyrean. Back in May, Mr. Gabriel Baker pointed out some current champions of the guitar-solo sound, among whom Dinosaur, Jr.’s J. Mascis very deservingly made an appearance. But despite these few shining stars, lead guitarists rarely bust out now into the forefront, and a guitar solo seems ever-increasingly too random to find a place within the carefully measured arrangements of a rock song. Solos are kept out of the studio and reserved for the live show, and even then they seem to require a justification provided by the larger harmonic structure of the song. A guitar solo now does not stand out as its own piece of improvisational music, separate within the larger piece, but as a line of hummable melody with harmonic significance, played more as a collection of premeditated half-chords and short riffs.

Even Doug Martsch, despite his exceptionally acrobatic guitar playing, always stays within the tactile limits of a song’s whole harmonic direction, and when seeing his Built to Spill live a few summers ago, I noticed his solos stayed pretty true to the studio versions. A frustrating aspect of My Morning Jacket’s sound, although they are labeled by some as a jam band, is that the mounting guitars never seem to reach the frenzied speed and the unstructured jamming they promise. So, to exorcise my angst, here are my three favorite guitar solos-of-old:

Everyone seems psyched on playing country-infused rock now, so starting with a dyed-in-the-wool country tune seems to work out alright.  On this Gram Parsons-penned opener from Emmylou Harris’ 1977 album of the same name, the solos aren’t just great examples of some fierce, country flat-picking licks; they also form an integral part of the song, giving sting and sass to Harris’ velvety singing in the verses. But despite the powerful vocals, the lead guitars dominate this mad country boogie. During the last minute and a half, guitarist Albert Lee really cuts loose, chug-a-lugging all up and down the neck of his six-string, ultimately fading out with the quarter-note click of the bass and the cricket scratch of fiddles.

This track from Cream’s 1968 album Wheels of Fire is at its core a straight-up blues number, albeit filtered through a lens of acid and uniquely sixties, uniquely white, uniquely British countercultural “politics”—if that word can even be used. But I am not here to assess the song’s lyrical content. I am talking about the almost 2 minutes of guitar soloing toward the end of this song. Drawn out over just two long 12 bars of blues, the syncopated stutter-step of the entire song reaches here a blissfully chaotic fruition.  What sound like 20 guitars slice in left, right, and center of the stereo mix, cutting briefly through with small, incisory riffs before ebbing, as another wave from Clapton’s Gibson rolls in on the other end of the mix. Thank you, Slowhand.

This ten-minute behemoth is one single, spaced-out guitar solo, featured as the opening track on the 1971 Funkadelic album of the same name. I suppose “Maggot Brain” does make a lot of best-guitar-solo lists, but surprisingly few casual music fans seem to know about it.

A milestone in acid rock, “Maggot Brain” was played by a then 20-year old Eddie Hazel. With this performance alone, Hazel earned in my book a place among the forefathers of hard rock, funk and metal guitar playing, alongside Hendrix, Clapton or Page. “Maggot Brain” has been covered live by a wide range of bands and guitarists, from Widespread Panic and Ween to J. Mascis and Nels Cline. Often, guitarists running the hard rock gamut simply don’t realize they are drawing from a stockpile of licks that Hazel helped to create.

Despite the lack of lyrics and singing to further localize the emotion of “Maggot Brain’s” instrumental passages, Hazel somehow keeps the warped riffs firmly grounded, chained to their bloody red core. The pain at the center of this piece is obvious, dictating the vicissitudes of Hazel’s swings from frenzied fortissimo to near stone-dead, withdrawal-like stillness.

Legend has it that chief Funka-deligate George Clinton told Hazel before recording this song to play as though his momma had just died. As much as this story adds to the aura of “Maggot Brain,” whether or not it is true is ultimately unimportant. The greatness of this solo guitar performance lies actually in its mystery and unknown inspiration. Hazel offers in his solos an ever-refocusing, kaleidoscopic view of his struggle with this problem, as he repeatedly gears up with slow-building, youthful vigor, only to violently and futilely slam himself again into the same wall.

Or maybe it is just that Hazel was really, really high. Either way, the riffs are ridiculously bad ass, and blow me away now just as they did when I was 17. Sober or otherwise, I suggest laying back and having a serious listen.