The third and final part of our conversation with noise artist Jason Crumer. Read parts one and two. 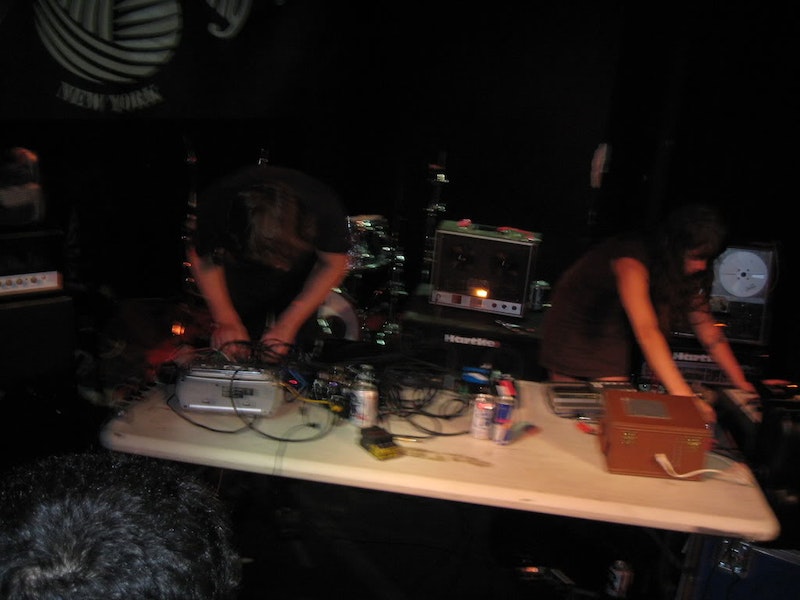 SPLICE TODAY: I was watching some YouTube clips of your shows from a couple years back, and it looked like you used sheet metal or aluminum foil as a basis for some sounds; you managed to get some thrashing noise out of that. Do you ever still use that approach live?

JASON CRUMER: I use metal in recordings a lot, yes. Not really sure what I do live now, as I don't play live except in groups with other people, it seems. When I do eventually get my shit within the same room as "together" for a live show, I imagine it will involve reel-to-reels recorders and loops, but not sure, there's no concrete reality of "what I do live" right now, so yeah, no.

ST: "Self Pity Fuck" is one of my favorite Let There Be Crumer cuts. There's just something very phantasmal yet unmistakably physical about it, and as it evolves you blend in these bells that are weirdly reminiscent of slowed-down "swords being unsheathed" effects. Then it gets supra-gnarly. How did this song come to life, and what were the elements of its creation?

JC: Hey, thanks; I'm glad you like it. The song is me dropping three crowbars on a concrete floor then digitally removing the hit so it's just the ambient hum. The other sounds are just basic noise stuff: throwing wood around, digging in a close-mic'd bowl of beads and opening and closing the the back door. The beads hopefully give the feeling they tell you you'll get in high school, when explaining why not to take acid. Spiders on my spine, oh no!

The bottom sound is just microphone feedback fed through a low pass filter that I slowly rolled off as the song went on. I was trying to go for an effect similar to the end of King Kong, with the sound of chains and restraints whipping off around the end as the feedback is set as free as the big scary monkey. The microphones for the crowbar wood and beads were excellent, and picked everything up real clear. I borrowed them from Liontech, which is a super-realistic model train making company in Berkeley.

ST: I'm always amazed by the ingenuity and conceptualizing that goes into your work - all the strategizing to achieve sonic ends. Are you just constantly coming up with ideas for sounds? Do you find yourself stockpiling potential ideas that don't immediately make sense in the context of whatever else you're doing at the time? Does it sometimes take more time to develop an idea in your mind than to execute it in real time?

JC: Noise by itself just wouldn't be very interesting to me without some visualization of what it's supposed to be, as in, "more than sound." I don't really have any pretentions to other people being able to hear these little things, it's just the only way I'm personally able to stay interested in making something long enough to make it any good.

When I was a kid, I'd create imaginary bands with imaginary time periods and discography from every genre and when I'm short on ideas I literally "steal" parts from those bands. Kind of schizophrenic but it works, and there is certainly a backlog of terrible ideas and parts to choose from. I am one of those crazy people who walks around making noises in my head, then when I turn a corner there's always a hot lady standing there just as I start to make a farting sound with my mouth. I have lots of ridiculously pretentious and super-arching ideas that I'll never have the money to do, and when I have occasion to have a computer and tape machine with a couple decent microphones I just try and "catch up" with cheap versions of expensive ideas.

ST: "Ending" is a good example of that for-two-ears concept in practice; it's a drone poem, but it's more living, breathing drone than what we've come to expect from that idea. I've always got this suspicion that there's a lot more going on under the surface in this song than listeners imagine.

16b. "Ending" is actually from my first record, Hum of an Imagined Environment. At the time of recording it, 2002, I was really bent on doing a "brutal" and "harsh" record because, you know, I was young and trying to be hard and macho and shit. There wasn't a ton of space at the end of my totally extreme record for a full guitar drone zone out piece, so I self-consciously cut 7 minutes and started the fade from song's beginning. It’s just this little poof at the end.

I figured putting it on the end of the big "comeback" record made more sense in a slightly grown-up environment, sound wise. Of course, my conceptions of what harsh and brutal meant in 2002 and now are pretty far apart, so large portions of Hum that I thought were just so fucking brutal, man, sound ambient now. I think it ends the record well. I left it at full-length with no edits except to clip this bit of distortion from it being off an old moldy CDr. The song "Ending" will be a decade old by the time it comes out as originally recorded.

ST: You've mentioned that the Christopher Forgues-created cover art for Crumer is in progress, and is the last element you're waiting on to finalize the album. It's occurred to me that while I know that Crumer is an expression of resilience and renewal, I've familiarized myself with it without an accompanying visual - a first for me, in terms of your music. What’s the cover like? Have you seen it yet?

JC: I think it's a portrait. I've seen elements of it, but not the whole thing. It should rule.

ST: Thanksgiving is just around the corner. What are you most thankful for right now?

JC:  My house, dad, two friends here in Baltimore, and the library. Let There Be Crumer.

ST: What's next for you, artistically speaking?

22. I'm currently working on a collaboration with Matt Parsons, guitarist for USA Baby. This one will throw people for a loop. There's some noise, some really fucked field recordings, an entire un-edited Metallica song, two R&B songs. I think the band will be called FILTHY and ANONYMOUS. At least, that's what we were calling the R&B band.

Aside from that I have an idea for noise with soundtrack to horrific violence/blood on the dance floor vibes. Like how Kozomoto Endo samples music in his cut ups, except the music wouldn't be funny; it would be ruling rock and roll, and not sampled. It's kind of obvious, but executed well it could be a true "trip." I’m excited for the guitar-worship-freak-out-until-noise-solo that's going to come somewhere on side A, and the obligatory drum solo near the end. I’ve been thinking up some kind of ultra-stereo performance, with just little dots of sound here and there, but not sure where or when that will be.

Since I really don't like playing live solo, I’ve been thinking of ways to make it less live and more academic or "presentation" like. There has been loose talk of a Reverse Baptism tour if my liver and low patience can handle it. I am going to sift through some old material for the previously mentioned two cassettes - and at some point eventually just starting legit work on album number six.

Overall, 2012 will be focused on just making tons of music. Of course this is all going to happen after I receive unprecedented amounts of money and glory for Let There Be Crumer.