Eighteen Hours of Static is a tonic. 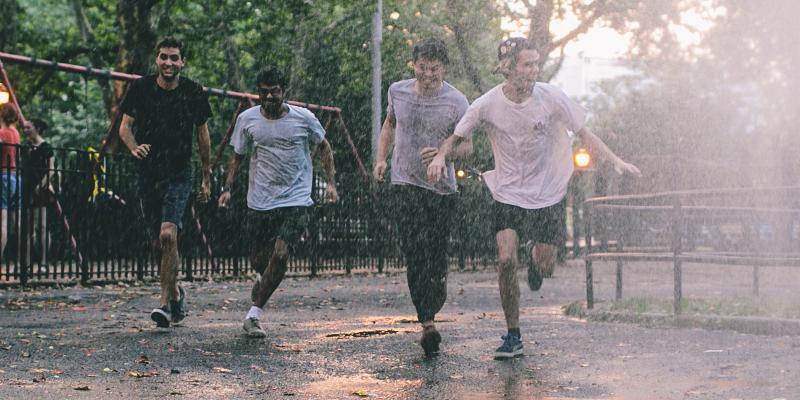 Do you need more fiber in your diet? Does your leg ache at this time of year? How many suicide notes have you drafted? Try Eighteen Hours of Static, the debut LP from Brooklyn’s Big Ups. It’ll will your ills away. “There really is no new way to play the guitar” a friend of mine tweeted this morning. This is patently false and a total lapse. Sorry man, anonymous friend. The thing is a piece of wood with six steel strings (seven if you’re in Korn), to cite something like Light Up Gold by Parquet Courts, another Brooklyn band, as evidence that there’s nowhere to go with the guitar is a roundabout way of wishing the guitar didn’t exist at all. David and Jad Fair from Half Japanese explain: “Some people worry about chords and stuff, you know, and that’s alright too, there’s all kinds of music in the world [...] but you do need cords in order to plug the guitar in.”

“WITH EYES AND EARS/WE CAN SEE AND HEAR/BUT WITH LIPS AND MOUTHS WE CAN KISS AND SHOUT/LET’S TAKE OUR HANDS/AND USE THEM TO FEEL/THEN WE CAN REST/THEN WE CAN HEAL” ends opener “Body Parts,” the first of 11 relentless and nimble rock songs that are never sloppy, comfortable, or disengaged. Joe Galarraga excoriates those who’ve given up and begs people to feel something; the band is articulate and quick-witted in the same way as his lyrics and vocal delivery, the music reinforcing or responding to what’s being said. There’s so many moments stuck in my head, like on the breakdown of “Disposer” where I immediately thought the band were subliminally referencing the drop C goose step of Limp Bizkit. Or the hilarious, super exaggerated drop-out on “Fresh Meat,” making fun of you-know-who’s loud/quiet dynamic while still managing to successfully use it. Or the slightly flanged lobotomized hook crying during the first half of “Grin,” a grim song that shifts completely in its last 40 seconds into this wild and hilarious boogie-woogie country groove before returning to the chugging war march of the beginning, “WE HAVE TO GET ON.” These aren’t four guys that just listen to Pavement, Joy Division or Interpol. Big Ups play rock music but it’s obvious that their sphere of influence spans beyond the you-know-who’s into something very specific and unique.

Galarraga’s lyrics are stark, hysterical, and bleak, and luckily they’re high in the mix so the record as a whole feels like a pipe bomb. Eighteen Hours of Static is the better, more constructive version of the Unabomber Manifesto. Galarraga’s delivery is like that of a voice actor, alternating between tongue-in-cheek semi-seductive whispering, primal screaming, nasally musings of your 13-year-old self crying on the carpet, defensively apathetic and sarcastic put-downs by people with nothing to contribute, and the go-to Patton-like commandments (“OPEN YOURSELF BEFORE IT’S TOO LATE”) and earnest reflections like “Sometimes I feel that the pace of my life’s too fast/then I think about all the time that’s passed/I can’t remember what I did yesterday or any day before at any rate anyway/What I’m trying to say is that I don’t want to live a life like this.” He has an amazingly expressive rock voice, and his tone, earnest and sarcastic, is clear throughout. Granite guitar and bass pummel you as Galarraga wails what we’ve all thought: “WHAT HAPPENS WHEN IT ALL GOES BLACK AND I’M LYING THERE DYING THERE TRYING TO THINK BACK,” with a machine gun, criss-cross delivery that makes me think of Sonic the Hedgehog. This record is a living thing, it fucking moves and drools and spits at you.

“EVERYBODY’S SAYS IT’S GETTING BETTER ALL THE TIME, BUT IT’S BAD.” That’s the record in a line: a possibly accidental response to privileged Beatles/Boomer attitudes as we move deeper through the decline of western civilization. This is a poke in the face of anyone who generalizes us as self-absorbed, passionless nitwits, and sets a standard for socially cutting and musically precise songwriting that most rock bands can’t meet.