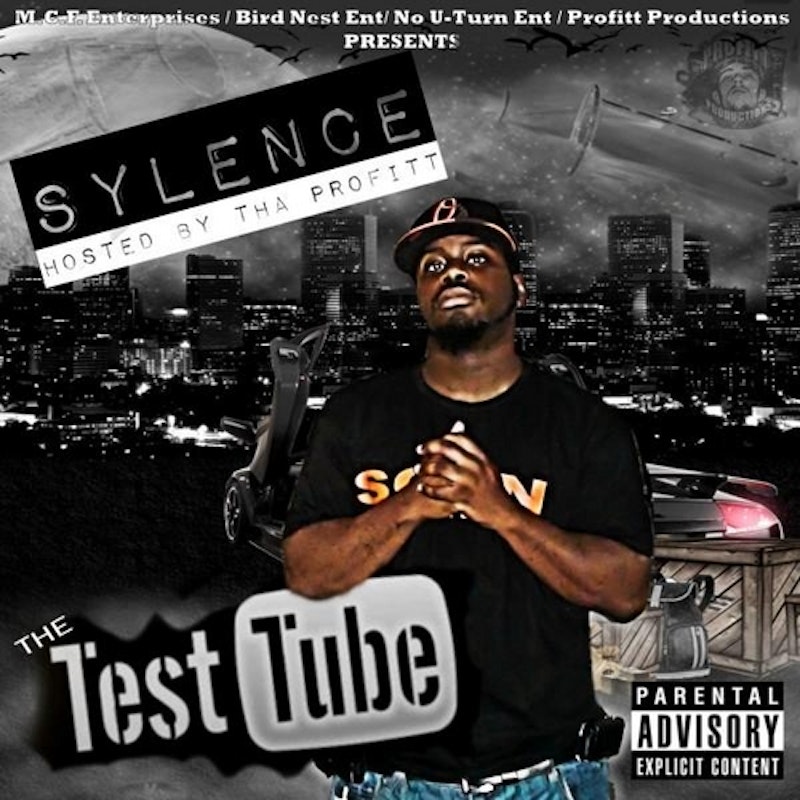 There’s nothing flashy or artistic, or autistic, for that matter, about how Sylence rhymes. On his Goin’ Hamm mixtape, the Baltimore rapper approaches his craft like a blinkered, frenzied pugilist, a bottomless fount of grittily gruff gut shots that suggest a serious imagination deficit. Sylence doesn’t (usually) evince much interest in bragging about high-life accoutrements, real or aspirational, or in expanding his vocabulary to encompass the infinite cornucopia that is modern pop culture, or in singling out specified foes for a sound lyrical drubbing.

Halfway through a freestyle set to the dingy, oil-stained Method Man/RZA “Bring The Pain” beat, Sy offers a revealing aside: “See, if y’all listen to my mixtapes, you can tell I love this Wu-Tang shit! I’m a 90s nigga; I don’t fuck with all this new shit.” And by “this Wu-Tang shit,” he’s likely referring to the blunt urban realism of Enter the Wu-Tang (36 Chambers) and not to Forever’s angel-dusted flights of fancy. Sylence’s perspective is straight street in the sense that, seemingly, he can only rap from experience, about what’s happening directly in front of him.

His songs aren’t enjoyable in a stolidly authoritative Rakim/Scarface sense, a lunatic Lil Wayne sense, a so-corny-it’s-brill Kanye West sense, or even an elastically bouncy Bossman sense; it’s more of a raspy, myopic/observational-freestyler-at-a-house-party appeal, a fully-inhabiting-any-given-beat vibe whose lack of overt guile or gambit is an endearing raison d etre in and of itself. In other words, Sylence is like the hip-hop equivalent of a Works burger from Fuddruckers: he isn’t changing the game, but because he excels at one particular facet of the overall game, it’s possible to forgive or overlook his deficiencies.

Sy tackles 2010’s most ubiquitous ivory-drenched mixtape beat, giddily holding forth on his weed-smoking prowess (“My weed is always potent, gotta puff it til I‘m choking“), his microphone game (“Can‘t a motherfucker stop me, I be ballin‘ on Ducatis“), skinny jeans generally (“Uh-uh / Them shits don’t hang right”), his whip-appeal (“Them ladies takin’ notice cuz I’m flier than a locust”); this is a surprisingly off-the-wall look for him, actually.

No points for guessing that “Amsterdam” is pretty much Sy going on about getting baked, getting baked in Baltimore, getting baked in Bmore with voluptuous women who probably are sharing his stash. (Note: I have no way of knowing this for sure, but I’d be willing to place odds that Raw Leaf can rap the entirety of Das EFX‘s seismic “They Want EFX” on command, in his sleep, high or stark sober.) Vaguely middle-eastern synths cycle alluringly in the background, unobtrusive yet comfortingly present, like floor-to-ceiling M.C. Escher or Magic Eye posters under faltering black lights. Could I go in for an hour-long mixtape consisting of nothing but Raw and Sy over fake-RZA muck beats rapping about weed? I think I could.

Now for a more aggressive, bugged-eyed side of Sy, a quick and dirty showcase of his old-school-esque abilities; he’s brusque and tough, but not in the sense that he wants you—and by that I mean “you” in the sense of a real-world antagonist—to come away with the sense that he’s coming for your loved ones or at least having someone trail them with a video camera, ala 50 Cent. The menace on display here is openly theatrical, like a lone prizefighter sparring with an invisible opponent in a closed-to-the-public downtown gym. When he asserts, “Niggas here me comin’ and they runnin’ like Diddy,” you can’t help but grin. I’m embarrassed to admit this, but I forgot that this was a Meth beat; for some reason I initially associated it with Craig Mack.

Ah, the eternal “C.R.E.A.M.” Every other syllable Sy spits here impacts like a thrown elbow, as if he were punctuating an in-person disquisition on his own beyond-reproach abilities with a disorienting series of non-ambulatory body blows. So when he raps something meat-and-potatoes knuckleheaded like “On the contrary boy, I be getting’ money / I’m stuck to it like a bee when he see honey / Ain’t nothing’ funny, I be getting’ bread,” the major stresses fall on “money” and “honey” but every other word feels like a separate dare, a standalone assertion. Collectively, somehow, they stick with you long after the song concludes.