B&S' The BBC Sessions is the newest offering from the John Peel vaults, and never feels as polished as a studio record or as loose as a live one. (Grade: B-) 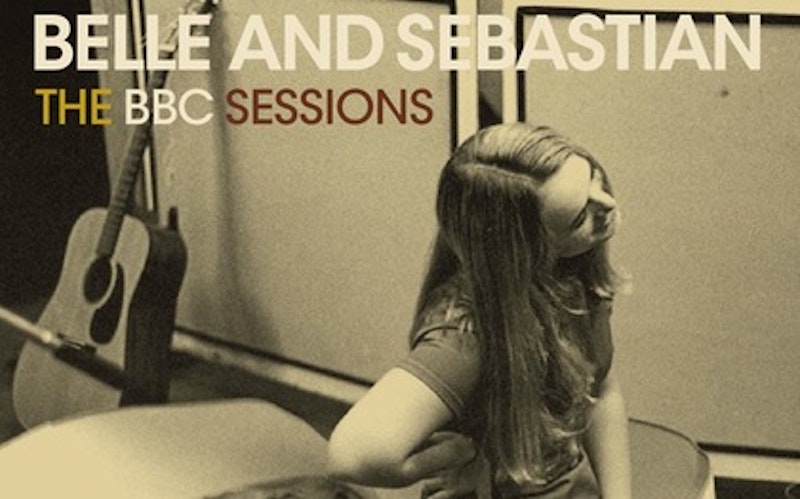 In re-listening to If You’re Feeling Sinister, Belle & Sebastian’s second album and their first to get wide distribution, I remember that, in their best moments, this band is audacious in the quietest way. The careening start of “Me and the Major”; the building pathos of the title track; when, in “Judy and the Dream of Horses,” the band fills in behind Stuart Murdoch and turns the song into a feverish shuffle—these moments would be searing if the dynamics weren’t so muted. This isn’t a criticism, because their restraint keeps their perverse eccentricity from seeming confrontational. “She was into S&M and bible studies”? Where Colin Meloy leers and Morrissey preens, Stuart Murdoch looks away with a rueful smile and a knowing wink.

I imagine this expression to be like that of the young woman on the cover of Belle & Sebastian’s latest, The BBC Sessions. Perhaps, with her dreamy expression, she is musing on the funny position of this in-between genre, the live studio album. With neither the finish of a studio album nor the abandon of a live one, this genre is closely associated with John Peel, the legendary BBC DJ who over nearly 40 years encyclopedically recorded four-track sessions with many alternative and independent bands. The final four songs on The BBC Sessions are Belle & Sebastian’s 2001 session with Peel, and they have double significance for fans. The songs were never released, and they are the last studio recordings to include Isobel Campbell, cellist and occasional singer/songwriter. Naturally, they will be the most closely scrutinized.

But I didn’t skip to the end, out of some misplaced sense that I should listen to it straight through. This wasn’t really necessary. The pleasures of these versions of the familiar songs have to do mostly with texture—the reedy, muted trumpet at the end of “Like Dylan at the Movies,” the deep reverb of the guitar on “Judy and the Dream of Horses.” A few bum notes, the breathlessness in Murdoch’s voice, the vocal harmonies that deviate from the albums, and the vampy rock-out bit at the end of “Lazy Jane” round out what make these recordings interesting. When I began to wish the drums had been better miked in the first five tracks, I realized I was bored. These are very good songs by a band in its prime, but the sanitized quality of these sessions kept me from connecting with them. It’s like watching a good band on late night television; I always get excited, but sometimes it’s like watching a caged animal. The circumstances seem to keep the musicians from acting on certain instincts, and it’s those instincts that are usually the most interesting.

I was relieved to get to the unfamiliar material, away from my longtime-listener griping. And I was mostly pleasantly surprised. Sadly, the title of “Shoot the Sexual Athlete” is the best part. It starts off with a simple bass/drum groove before Murdoch comes in doing what feels like a pretty thin David Byrne impersonation. Unfortunately the song doesn’t have any of the energy or tics that make the Talking Heads (and Belle & Sebastian) so much fun. The lyrics poke fun at the overly earnest late 80s kids who populated underground shows, but after a frankly odd mid-section, with bongos and a questionably tuned violin, the joke is on the band. “The Magic of a Kind Word” is a sunny release from the previous song, with lush call-and-response harmonies that show the band evolving to the expansive sound of their most recent records. Though some fans were maudlin when she left, I am an Isobel Campbell skeptic, and “Nothing in the Silence” does little to change that. Her whispery vocals are too twee even for this band, but a great harmonica line and trade-off vocals with violinist Sarah Martin make the song a decent bit of light brooding. The closer’s the kicker, live audience or no, and fortunately “(My Girl’s Got) Miraculous Technique” is every bit as good as its title. There’s great electronic percussion, echoing “Electronic Renaissance” from their first album, and Murdoch’s winsome vocals soar over the band at its tightest and fullest sounding. As in their best songs, the lyrics make the whole sublime: “Take a look around you, the spring has sent the sound of rain upon your windowsill, so grab your coat and play a song for me.” The sound of spring rain—what could be more evocative of Belle & Sebastian?

The last line in the song gets at all that is most perversely endearing about Belle & Sebastian: “If I could be a song, I would be something that would snake into your room, and be with you the whole night long.” A few missteps aside, the material on The BBC Sessions is uniformly brilliant. The problem with this album is really with its genre. The songs are recorded live, and yet they possess none of the spontaneous verve of a live show, nor any of the changes from the album recording that make live records interesting documents of the creative process. The unreleased songs certainly bear repeated listening, but the most eager completists may have already hunted down bootlegs anyway. The rote performances on The BBC Sessions keep it from being anything but a footnote, a reminder of the brilliance of Belle & Sebastian’s studio albums and their live shows.