The best song on Not Music that isn't "Two-Finger Symphony." 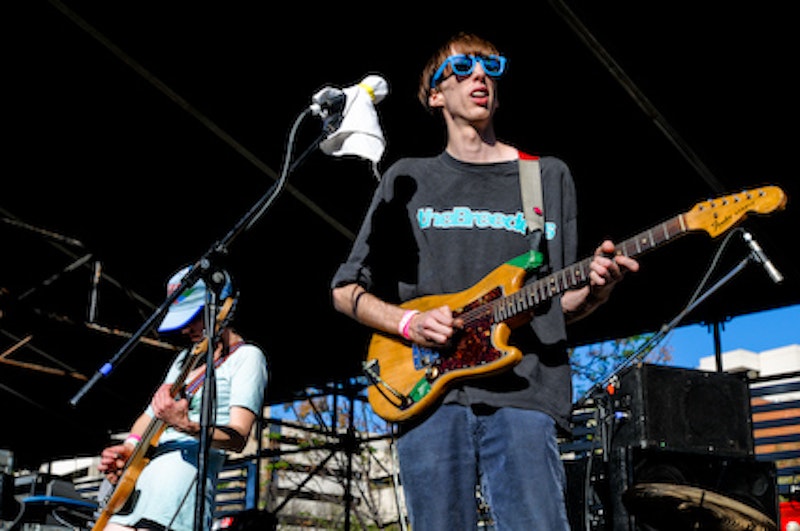 The closing cut on what is likely the final studio album of Stereolab’s treadmill-tempo career—Not Music, due out on Drag City in November—is not, strictly speaking, a Stereolab song. Rather, it’s an Atlas Sound remix of moony, mood-ring shrug “Neon Beanbag,” a glow-stick elevator-music interlude from 2008’s so-so Chemical Chords. And you know what? It’s a completely different composition, in the same way that “The Beauty of Being Numb”—a two-part “reinterpretation” by Sean Beaven, Brian Pollack, and Aphex Twin that appears on Nine Inch Nails’ Further Down The Spiral remix comp—had little to nothing in common with its source, The Downward Spiral.

The original “Neon Beanbag” was a bright, bubbly burst of helium smiles and rayon gimcrackery, organs stabbing out an almost metronomic Age-of-Aquarius groove, sunshine-y horn charts and spiraling piano figures akimbo, all mannered space-rock hackery and 60s smiley-face cheese topped with a cotton-candied Laetitia Sadier chorus that wallpapers over whatever fissures would bring on The Groop’s impending hiatus: “There’s nothing to be sad about/There’s nothing to feel bad about.”

Shortly following the release of Chemical Chords, Atlas Sound’s Bradford Cox cobbled together a “Southern Baptist Remix” of “Beanbag” that was briefly inescapable in the indie-blog diaspora. In essence, Cox, who resides in Atlanta, tacked a recorded African-American sermon (replete with “yes lawds”) intro onto a version of the song where the levels shift and sway forward then aft then forward again, while a fissure of noisome synthetic bells shimmer distractingly at its stereophonic core.

For the Not Music remix, however, Cox ventured further afield, ditching the intro and literally turning the track inside out. The opening reminds me of a snowball rolling downhill, gaining size and mass steadily, or a tumbleweed with a healing factor. Blue-green synths spiral like blades in an operating washing machine, a lulling three-note melody infinitely burrowing on cue under looped wood-block clacks, updrafts of pulsating reverb, and barking X-acto’d harmonicas. It’s like being sucked into a controlled, benign vortex, spun merrily round. Twirled-dial frequency noise-tones are introduced and manipulated so that they seem to be blown up and off into outer space; a dazed xylophone line lagging behind the pace, sampled Sadier syllables triggered to suggest a nonsensical showdown. All the while, almost eight minutes of it, that shifting churn is slowly reduced in strength, like a troop withdrawal.

It feels like Cox’s odd way of saluting personal heroes, like an especially convoluted round of applause.