Merriweather Post Pavilion sounds more comfortable and mature than their older work, and this record may be the band’s best yet. (Grade: A) 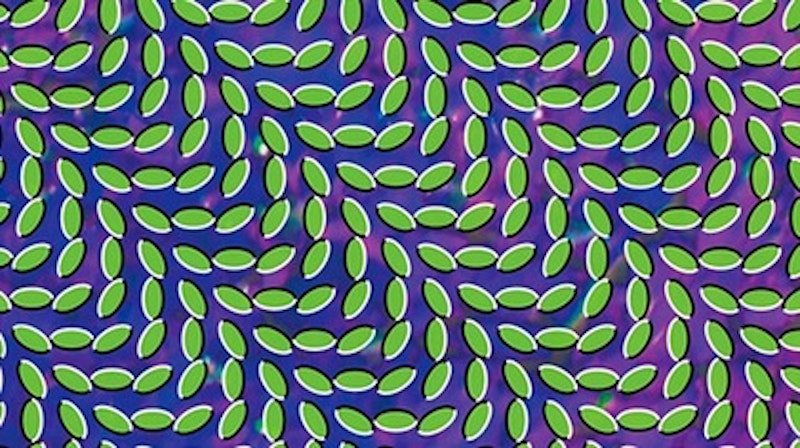 With the release of Animal Collective’s last LP Strawberry Jam, it had become apparent that a group that had once been regarded as avant-garde experimental freak-folkers had actually become pretty good at marketing themselves. Emerging from the gritty and miraculous lore of their former releases Feels and Sung Tongs, Strawberry Jam was a highly engaging, far more accessible record. The title was a tongue-in-cheek admission that they’re a “jam band” inspired by a revelation of how “synthetic” and “sweet, almost in an aggressive way” the PB&J staple was. The album came packaged in a crisp white case filled with images of spoiled fruit covered in blotches of bright paint—a photographic concept so interesting in itself that it could have stood alone. After launching a beloved album that proved the band had mastered their psychedelic essence, it seemed unlikely that Animal Collective’s next LP could ever measure up. Luckily for all those who iTunes classifies as a “freak-alt-folk” fan, it does.

Merriweather Post Pavilion is to Animal Collective what Rubber Soul was to the Beatles: the album that not only proves that a band is capable of maintaining an identity while making ever-morphing sounds, but also establishes that the band has the power to define a season on the charts, and the sound of a decade.

At first glance, Merriweather doesn’t have quite the unified totality that made Strawberry Jam so iconic. Named after a mainstream concert venue in suburban Maryland, the title doesn’t help to clear up any associations between Animal Collective and artsy pretentiousness. The cover art is an awkward purple-green combination of a leaf pattern that looks like a nerdy 1990s screensaver at first glance… but should a fan embark on staring at it in a drug-induced haze, they would be pleased to find that it is an ever-morphing optical illusion that ripples back and forth.

Despite the lackluster packaging, Merriweather produces an all-new flavor. Serene harmonies invade almost every track, along with thudding, danceable bass lines and plenty of sonic explosions tweaked and stretched to the point of revelation. From the first track “In the Flowers,” which starts with whispers and bursts into a nostalgic epiphany as layered as a wedding cake, to the final track “Brothersport,” their particular brand of magic is everywhere. One of the best tracks is “Summertime Clothes,” which begins with a dirty, back-and-forth beat and howling vocals and later turns into a jaunty warm-weather dance song.  “Taste” is another standout track, with scattering bubble sounds and stilted industrial noises that lead to a catchy chorus where the band asks, “Am I really all the things that are outside of me?”

While all of Animal Collective’s previous work has captured an adolescent frustration by means of complex lyrics and clashes between sonic beauty and disturbing shouts, Merriweather Post Pavilion embarks into themes of adulthood. Gone are the obtuse lyrics of Water Curses and Strawberry Jam; this album centers on women—most specifically mothers and children. This new inspiration is likely due to Noah Lennox (Panda Bear) and his experience with his daughter Nadja, as well as other band members settling down into married life.

The lack of tension on the album is disconcerting at first, but with the expertise of long-time artists, the band quickly settles down into their new themes and proves that they can just as poignantly and beautifully explore the idea of fatherhood. “My Girls,” the album’s first single that is already a hit on the blogosphere, is a twinkling declaration that chants, “Is it much to admit I need/a solid soul and the blood I bleed/with a little girl and by my spouse/all I want’s a proper house.” “Daily Routine” also deals with fatherhood, singing about the tasks and dangers of helping a child get to school, all amongst stretching vocals and a trickle of rhythms struggling to find themselves.

Even though the ethereal Merriweather Post Pavilion is a departure from Animal Collective’s initial fascination with the emotional value of ugliness, this album proves that the band will never lose their ability to evoke the most private of life’s moments. “My bed is a pool and the wall’s on fire/soak my head in the sink for a while/it chills my neck and it makes me smile/but my bones gotta move and my skin’s gotta breathe,” the band sings in “Summertime Clothes.” In their uncanny method of working poetry out of a bunch of samplers, this century’s most interesting act proves they’re still here, and eminently so.