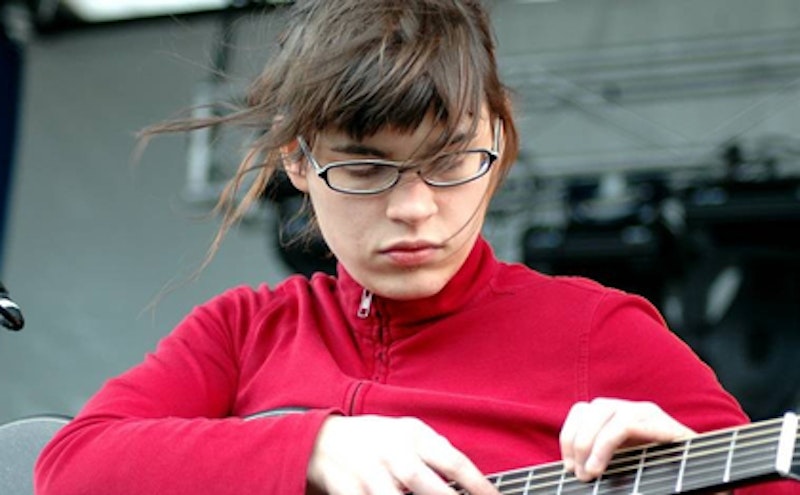 On her early albums, Everybody Loves You and Legs to Make Us Longer, guitarist Kaki King made the niche genre of virtuoso guitar instrumentals into a lively and charming site of innovation. Then, around the time of her 2006 album ...Until We Felt Red, "guitarist Kaki King" became "guitarist, singer, songwriter, and bandleader Kaki King." With that record, produced by Tortoise's John McEntire, King explored the textures and dynamics of a full-band sound, workshopped her lap-steel skills, and tried her hand at vocals and lyrics for the first time. The result was an engrossing and vivacious album, which remains one of the most rewarding releases of the last couple of years.

In Dreaming of Revenge, King's fourth studio album, she extends her forays into the full-band sound largely coordinated by pop- and folk-versed producer Malcolm Burn. The opener "Bone Chaos in the Castle" shows off a dynamic percussion sound only hinted at by Until We Felt Red's expanded textural palette, as fierce electric guitar and lap-steel riffs surge and King's trademark percussive fingerpicking style ricochets against propulsive live drumming. The album is full of warm and soft sonic mise-en-scene moments that nonetheless haves room for rhythmic and melodic play. "Sad American" exemplifies this style; it’s an almost sculpturally designed slice of sound, and the song feels as though it is constantly in motion, soft rhythms gorgeous with escalating riffs pulling the listener in multiple directions at once. The album's mellow blend of sounds hits a surprising physicality on the slow and trebly "So Much for So Little," an album highlight.

Dreaming of Revenge also showcases King's leaps in singing and songwriting. The most striking example of this comes early in the album with the haunting "Life Being What It Is." King's voice is untrained but lovely and her lyrics obliquely desperate. Set against melodic, hushed finger-picking redolent of Elliott Smith, this combination yields a sinister tune which demands repeated listens. The dizzying, poppy gem "Pull Me Out Alive" is an uptempo counterpart to her previous album's centerpiece, "You Don't Have to Be Afraid." "2 O'Clock," the record's delightful final track, builds from a quiet opening into a plaintive sing-along before erupting into a captivating display of King's technical skill (and her band's).

There are missteps. Clunky title aside, "Can Anyone Who Has Heard This Music Really Be a Bad Person" is an unimpressive, overly string-laden rehash of ...Until We Felt Red's much subtler title track. Indeed, much of this album's poppy direction spills into overwrought territory which, coupled with the LP's homogenously gentle vibe, makes this a more forgettable album than her previous releases.