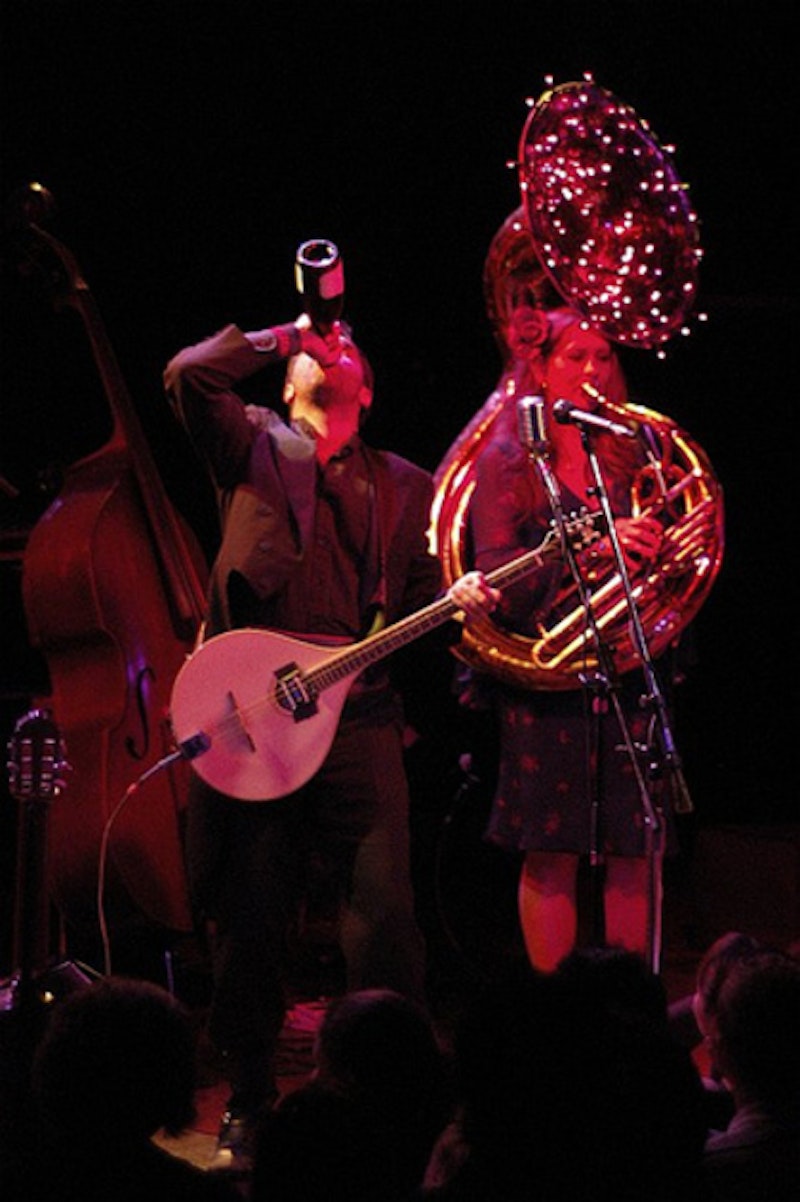 The members of Denver, Colo. quartet DeVotchKa saw themselves caught up in a rather unlikely rise to fame after the smash success of Academy Award-winning indie flick Little Miss Sunshine in 2006. The directors of the film commissioned the band to write original music for the film, and also used several compositions from the band's 2004 album How it Ends in the film's soundtrack. Needless to say, the band started to gain a reputation due to the film's success, signing to Anti-Records (home of Tom Waits and Nick Cave) and even having their music performed by the pit orchestra at the Academy Awards for two years running.

This claim to fame is considered unlikely in regard to the music DeVotchKa plays. Their brand of indie rock draws primarily from Eastern European, Slavic, and Mariachi music, and as such, their comparatively alienating sound hasn't made them as popular as fellow indie-folksters. Their move toward a big indie label coupled with their relative obscurity left the band with the advantage of more freedom to act creatively without the pressures of catering to a popular audience. Thus, they created a minor masterpiece.

The band manages to stay to their roots insofar as they've recreated the song "Head Honcho," which originally appeared on Super Melodrama, making it more crisp and professional. This time, when frontman Nick Urata sings "We're gonna hit 'em, hit 'em where it hurts," he really means it. Furthermore, album opener "Basso Profundo" charges like a bull at the gates, if the bull were playing tuba and singing ghostly chants of "Oohs." The energy is relentless in this track, and the tension that is created as soon as everything slows down and builds up again is utterly magnificent.

When the energy levels are turned down slightly, though, the band's gift of melody fills in the gap. The album's first single, "Transliterator," is the most conventional track on here, but the sparkling keyboard notes that define the song's riff are lovely and infectious. "The Clockwise Witness" utilizes Urata's lovelorn croon phenomenally as he belts out, "I can't fake it anymore," over a melancholic yet uptempo backing. What is doubly impressive about most of the songs here is that on the songs where melody overcomes energy, there is still more than enough energy to keep everything moving nicely, and vice versa. This was a small problem with the band's past releases that stands corrected here.

Some of the album's highest points lie in its two instrumentals, "Strizzalo" and "Comrade Z." These are works strictly in the vein of traditional Slavic music, with hardly anything indie or rock about them. "Comrade Z," in particular, showcases the band's skills as musicians and songwriters, composing and executing a brilliant and complex melody on strings and brass, with a tuba keeping the tempo up by bouncing along brightly. Another stunning point where the album's instrumental passages take over is during a break in "Undone," where dark, slithering strings strike out with great fervor.

With A Mad and Faithful Telling, it is unlikely that DeVotchKa will see another rise to relative popularity in the same manner that they received with Little Miss Sunshine, but this is all for the better. This band works best when it puts classic pop song structure behind a complex array of strings and horns, filtered through a thick screen of European folk music. This pinnacle of everything they can do properly asserts the notion that DeVotchKa will truly be a band to look out for in the coming years, or in the very least, that A Mad and Faithful Telling will end up being one of the best albums of the year.