A Lesson in Being Tough 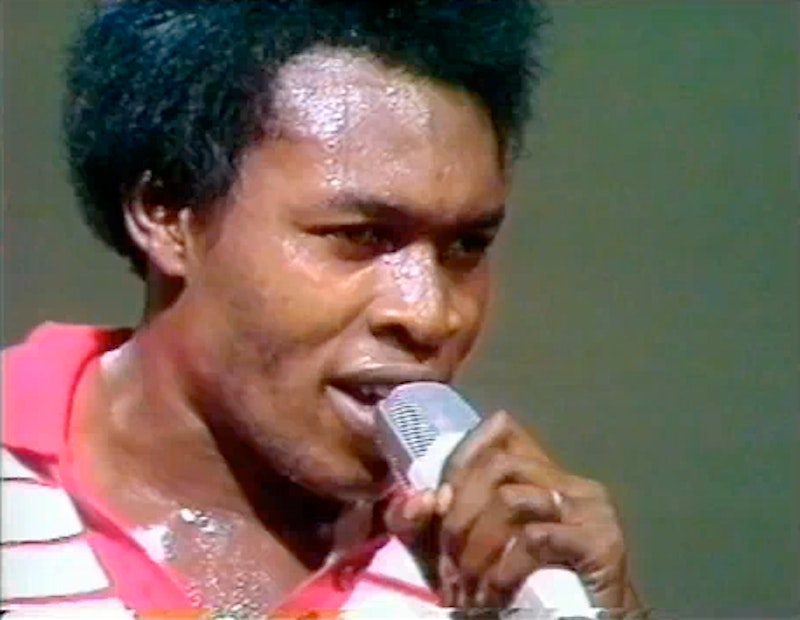 I couldn’t bring myself to make any lists for the end of the year, end of the decade—it might’ve been the end of my sanity. I can compromise a little bit, though, and give you this week’s version of my favorite album of the year, the posthumous collaboration I’m looking forward to the most in 2010 and three other YouTube videos from the number one continent of life.

I’ve finally found the answer for the inevitable “why?” I get after I say my new year’s resolution is to go to Africa, track down my favorite music and stay there for a while. Because “Over there, life is really happening,” a statement made by no less an authority than legendary Cuban bassist Orlando ‘Cachaito’ Lopez and co-signed by the late Ali Farka Toure, who goes on to explain that with rice, millet, okra and sweet potatoes, how could one not be happy?

This recording session, almost five years old, will be released as the follow up to In the Heart of the Moon, in February, and I’m already proclaiming it a five-star all-time classic of feel good music. I know not everyone in Mali is happy all the time, but this seems awfully genuine. When they talk about “love, sincerity and solidarity” and Toumani Diabate’s kora cascades over and around Farka’s guitar and then they cut to the little white kid hugging him, I pretty much lose it, and I’m not a particularly sentimental person.

In fact, stories of the “human interest” variety rarely appeal to me, but man, I am interested in these humans that comprise Staff Benda Bilili. Overcoming adversity is a rote theme in music “from the streets” but this group of paraplegics who recorded their album outside the Kinshasa zoo with pirated electricity and hand-made instruments execute that cliché with style and grace. Their tricycle/wheelchairs are more hyphy than stunna shades, and when they sing talk about suffering, it’s far from a call for sympathy or a fetishization of poverty—it’s a lesson in being tough.

Their 2009 LP, Tres Tres Fort, which means “Very Very Strong,” is their so-called street manifesto. Some of the influences are obvious—James Brown (they pepper the phrase “Sex Machine” throughout “Na Lingui Yo,”) Tabu Ley, Fela Kuti and Jimmy Cliff, and some are a little more obscure, like Eboa Lotin and Vadio Mambenga. What sets this group apart from a whole grip of Congolese musicians is their ingenuity, embodied by Roger, their 17-year-old satonge-ist. I’ll leave the more in-depth reviewing to Splice Today’s Gabriel Baker; he covers it well.

If I had one complaint about Staff Benda Billi, it’d be that sometimes the vocal intensity doesn’t match their instrumental prowess. They ought to go out and get this guy, about whom I know literally nothing:

I may also be responsible for half the views the video has gotten so far, but I just can’t get enough of the way the guy looks dismayed when the people off-camera start singing and then all of a sudden people are clapping and killing it. The video is long, but it picks up steam as it goes along, and I could click-through the related videos all day. In fact, that’s one of my favorite things to do on YouTube—search an obscure genre of music (in this case, “Wezen”) and click on related videos until you reach the non-English nether regions of YouTube.

Sometimes the lack of information (or comprehensible information) can be a bit frustrating, but there are usually contextual clues. Take this video for instance:

Until they brought out a picture of Mobutu Sese Seko, my most profound thought about this video was along the lines of holy crap that’s an awesome shirt, and geez how do you get your guitar tone so baller that a VHS rip on YouTube through computer speakers causes Andrew Klein to instantly sit up straight and declare his desire for another spliff.  Now, I know that and that this band was from Zaire, which (full circle) is now the Democratic Republic of the Congo (where Staff Benda Billi hails from) and, via Wikipedia (http://en.wikipedia.org/wiki/Mobutu_Sese_Seko), that Sese Seko was basically a more stylish Idi Amin.

On the other hand, YouTube is also overflowing with videos that convey more information in greater depth than an ethnomusicologist could with 10 theses. Sometimes it’s much easier to just leave it to one word.