When "sad" isn't nearly enough, here's the music that will have you begging to end it all. 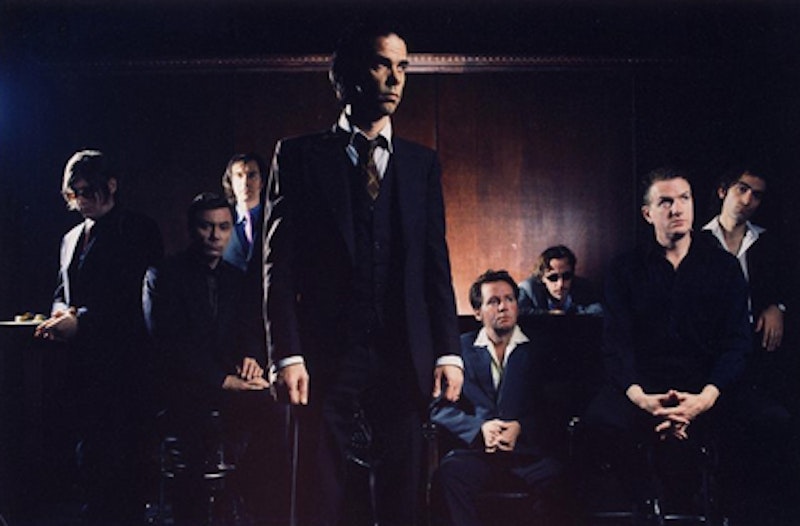 Nick Cave and the Bad Seeds: Not happy dudes.

Is there any ground more fertilized with despair and bitterness than a major metropolitan airport? What is better suited to sterile misery than the anonymous lounges and bland tile floors of, say, the Southwest departures area in Manchester, NH? During a recent experience in that exact locale, I got to thinking about the most suitable music for the occasion. What follows is a list of some depressing pieces of music. I’ve selected the pieces based, more or less, on the fact that they are depressing rather than merely sad.


“The Ballad of Hollis Brown”
Bob Dylan
The Times They Are A-Changin’
Like many of the songs in this inventory, “Hollis Brown” tells a story. Dylan’s song works on a simple, hypnotic repetition, each verse repeating once before adding something new: “You look for work and money and you walked a ragged mile/You look for work and money and you walked a ragged mile/your children are so hungry that they don’t know how to smile.” All this sits over an equally simple and hypnotic four-note phrase played on an acoustic guitar. Hollis Brown’s story is a classic theme of the depressing song genre. Brown is some kind of simple farmer with a wife and five children. Fate has consigned him to South Dakota. He’s fallen on hard times, and because this is a Dylan song, and a depressing Dylan song, they’re some very hard times indeed. Dylan describes Brown’s desiccated farm in short, cold phrases: his mare is dead, his wife screams at him, his “grass is turning black and there’s no water in [his] well.” When Brown buys some shotgun shells you know it’s not going to have a happy ending. Some of the songs in this inventory turn the horror of their contents into a sort of zest, racking up awful circumstances so lurid and terrible that we can’t help but laugh. This is not one of them.


“Forever Young”
Alphaville
First Harvest
“What,” you are probably thinking, “is this song doing in this list?” “Forever Young” has for years served as the punch line to easy jokes about the 1980s, working like musical shorthand for a time of pastel colors and extremely sincere movies. Sometimes this works very nicely, as in the underage drinking episode of It’s Always Sunny in Philadelphia. The finale of the show has developmentally arrested 30-year-old Charlie alone at a high school prom, bravely trying to have a good time despite the fact that his brace-face teenage date has ditched him. “Forever Young” plays as light from the mirror-ball dapples his rented tuxedo. Alas for the time of  “youth like diamonds in the sun”! In its stately, syrupy minor key the song celebrates and laments an inevitably transient adolescence. Of course it does so in a sentimental, obvious, and hyperbolic way, but that’s what we jaded citizens of the 21st century want in our 80s songs. In fact, the song’s 1980s provenance has doubled its nostalgic value, since it’s now both a song about nostalgia and an object of nostalgia. Twice the depression for your dollar! It would be interesting to know what people thought of the song at the time; I don’t remember, I was four.

“Death Cell Blues”
Blind Willie McTell
The Definitive Blind Willie McTell
This is a song sung by a blind bluesman from the perspective of a man who has been sentenced unjustly to life in prison—how could I responsibly leave it off this list? Really, I could have filled this inventory with Blind Willie McTell songs, but in the interest of variety I have restricted it to this one. McTell recorded the song in 1933, and the antique sound certainly contributes to the sadness and desolation of the story. The narrator has lost his girl, his freedom, and even his name (he laments that he is called only by his prisoner number); the judge won’t hear his appeals, and all he has to look forward to is a slow death in his cell. McTell moans wordlessly (and effectively) for part of the song, and his nasal, plangent voice suits the luckless narrator perfectly. He sings over a slow, understated blues guitar, striking a despairing and lonely tone, “They got me charged with burglin’ and I haven’t even raised my hand.” The lyrics address the inequity and the anomie of his prison term without ever contemplating escape or parole—this is one of those songs that pushed past the depression barrier and starts to sound a little funny. Perhaps this is because of the tinny, aged sound of the recording, perhaps because of the outlandish catalogue of crimes that McTell recites (“they got me killed for forging but I can’t even write my name”). McTell didn’t get to be one of the most famous bluesmen of the 20th century by slacking off when it came to songs of injustice and oppression.


“Roads”
Portishead
Portishead
Whither Portishead, the 1990s British trio that brought existential whining to a high rare level of art? Apparently they have released a new album after a long hiatus, but “Roads” comes from an earlier period. I was in high school when Portishead, the band’s second, more popular album debuted, and I think no music better captures the pointless angst of a teenager better than this. As in many of the songs in this inventory a haunting vocal overlays an extremely simple melody—just a few warbling electronic organ chords and synthetic strings support Beth Gibbons’ plaintive, vulnerable voice. “Roads” is not a story song, and only an extremely generous listener (or, perhaps, a 17-year-old) would praise the lyrics, a soppy and obtuse pop treatment of loneliness and alienation: “I’ve got nobody on my side/and surely that ain’t right.” But despite its lyrical flaws the song has a wonderfully depressing sound, and Gibbons’ high, clear voice treats the mawkish words with total sincerity. “Roads” also earns bonus points for appearing in the movie Tank Girl in a scene in which Lori Petty inexplicably takes a post-apocalyptic shower in supersonic dust.


“The Kindness of Strangers”
Nick Cave
Murder Ballads
On an album filled with unpleasant and sadistically violent songs, “The Kindness of Strangers” stands out as the most realistic and the most tragic. The murder ballad actually is a genre of music, usually a cautionary tale in which the murder serves to teach a lesson (usually something slightly more complicated than “don’t get murdered”). This song precisely fits the genre, telling the story of Mary Bellows, an impoverished girl from Arkansas who leaves her home for the California coast. “Poor Mary thought that she might die/when she saw the ocean for the first time,” and because she’s met a man named Richard Slade she’s right. Cave (atypically) leaves most of the details of her murder to the listener’s imagination; he also doesn’t tell us much about Slade, except that he helps her with her suitcase. Slade is not one of the Milton-quoting supernatural fiends who carry out many of Murder Ballads’ killings. He’s just a cruel and violent man who takes advantage of a naïve, unhappy girl whose short life has held nothing more pleasant than sitting outside a cheap motel room watching the ocean. “So mothers keep your girls at home/don’t let them journey all alone/tell them this world is full of danger/and to shun the company of strangers/Oh poor Mary Bellows,” Cave concludes. This depressing moral could have closed any 19th century barroom cautionary tale.