NBC's newest gameshow, Minute to Win It, is beyond bad. 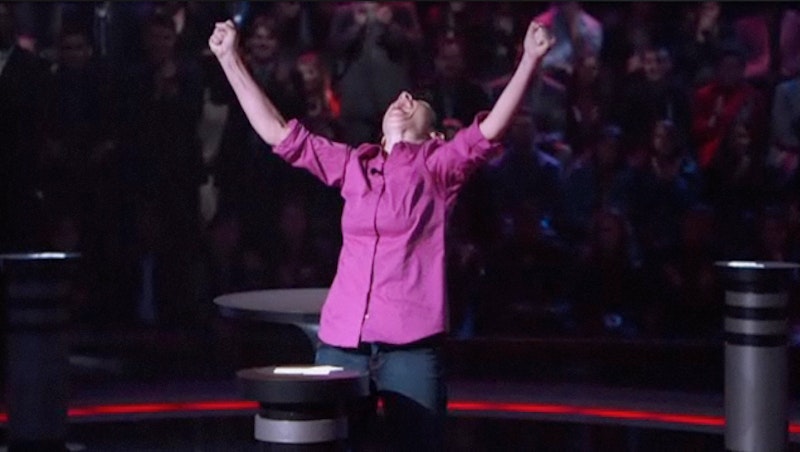 My roommate, fellow Splice contributor Gabriel Baker, and I have this game we like to play. It’s not difficult to follow. You see, we toss cigarette lighters back and forth to each other, catching them on the backs of our hands. Seriously. And then we try spins and elbow bumps and all the while tossing up the lighter and catching it on the backs of our hands like so:

At the Splice office, complete with beyond-wretched painting Study
of Martini and Cigar, left by John Lingan. Bastard.

If you’re already weeping for our lost senses of decency, join the club (Gabriel’s girlfriend is president). Now consider this list:

HANKY PANKY - Using only one hand, the competitor must pull tissues out of a tissue box one at a time until the box is empty.

JUNK IN THE TRUNK - A belt with an empty tissue box is attached around the competitor's waist and positioned against the contestant's back with the hole facing outwards. Ping-pong balls are placed inside the tissue box and the competitor must jump and wiggle to shake the balls out of the box without letting his hands touch the ground. All balls must be out of the box to complete the challenge.

EGG ROLL - Contestant must move three eggs across the floor and into a target area only by "fanning" the eggs with an empty pizza box.

BOBBLE HEAD - A pedometer is attached to the competitor's head and he must move his head to rack up a total number of steps to complete the game.

MOVIN' ON UP - Contestant is given a stack of 49 blue plastic cups with a red cup on the bottom. He must race to move the one red cup to the top by holding the stack and continuously moving the cups, one by one, from the top to the bottom through the entire stack.

If you think the above list of activities is straight out of a trying-too-hard Rainy Day manual from your parents, the Boy Scouts or a sad excuse for a summer fitness program, you’re sadly mistaken. Since The Real World and Road Rules ushered in the feckless genre “reality television” it’s difficult—and nearly impossible—to find one of those “mainstream television is an absolute vacuum of time and energy and attention and intelligence” examples because we’ve already been exposed to what seems like the worst of the worst: The Hills, Real Housewives, The Apprentice, The Weakest Link, Rock of Love, blah, blah and more blah.

Alas, the above list of veritably inane—indeed, the words ooze with smug knowing—relates to NBC’s newest show, Minute to Win It, hosted by that chef guy with the spiked platinum hair who’s in those TGIFridays commercials. Contestants compete on what has to be the same set as Who Wants To Be A Millionaire?: rippling displays of be-your-own-DJ-in-20-minutes lighting effects, Yamaha keyboard synths and an insignificantly sized audience.

I don’t feel the least bit uncomfortable telling you I have watched all of 10 minutes of this show. Seeing the previews (this was during what was supposed to be a relaxed bar-burger-beer experience) cut into the golf coverage was unsightly—look, that guy’s pulling tissues out of a box!; hey, man it’d be difficult to toss a pitcher of water end over end so it lands right side up on a table!—and after all of a dozen minutes of the actual show the bartender cut to a Canadian hockey game.

These tasks have all the depth of a 55-second YouTube video with, say, 25,000 hits, because sitting around flipping through utterly random YouTube clips happens. It happens—to all of us, and it’s OK. But Minute to Win It tries to take the parlor trick (and not even interesting ones!), the human pursuit of being the best at something (anything), the YouTube-driven desire to be famous for a few minutes, and the glow of cash (a cool million dollars awaits whoever masters all these things) all at the same time in the context of gameshow. It’s catastrophically depressing. (Also, the premiere was two hours long. How is it humanly possible to watch this show for two hours? The commercial breaks would have more range and depth of thought.)

It's possible Minute to Win It broke the bank of bad television, like a cicada shedding its exoskelaton and, along with its many billions of relatives, devouring small trees before huddling down in the earth to relax until the next insult to humanity.