A new box set bundles together some of Schwarzenegger’s best and worst, which probably wasn’t the idea. 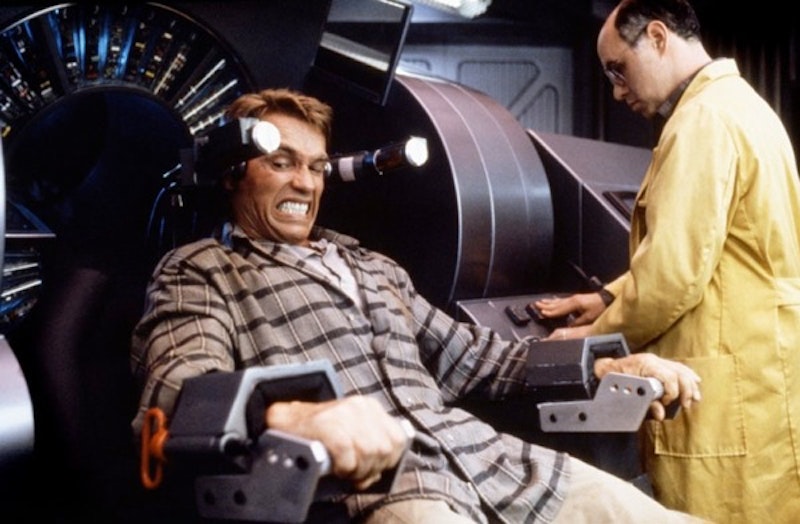 I didn't much like the recent Terminator Salvation for stomping all over the moderately interesting aspects of the original movies, but midway through writing that review I realized that I hadn’t actually seen The Terminator and T2: Judgment Day in years. So I rewatched the first one and then noticed that Lionsgate Films, apparently the owners of a few Schwarzenegger DVD rights, had tossed together a box set to cash in on the new Terminator movie. I enjoyed rewatching The Terminator, which is solid meat-headed fun despite the soprano-sax-and-scented-candle sex scene between Linda Hamilton and Michael Biehne, so I contacted Lionsgate and told them I’d bite; send the box set along. And I’ve now watched about 10 hours of Reagan- and Bush I-era Schwarzenegger in the last week—more concentrated Arnold than I’ve consumed since my sleepover days.

There’s no unifying theme to this box set, nor any special packaging other than a flimsy cardboard box holding the four bargain-bin titles together. The box doesn’t even have a name; it’s just labeled as Schwarzenegger: 4-Film Collector’s Set. But this kind of blunt functionality seems appropriate, as the vision of Arnold one gets from watching the films—The Running Man (1987), Red Heat (1988), Total Recall (1990), and T2 (1991)—is that of a willing, muscled prop. These movies have a brash, for-entertainment-only quality, and the directors all ogle their own set design and special effects accordingly. It’s no coincidence that the worst of the four, The Running Man, is the one most impressed by its tepid sociological message, or that the still-unbelievable computer effects of T2 get occasionally bogged down by James Cameron’s humorlessness and penchant for monologues about the fate of humankind. But when a good director puts pretension aside and just keeps the plot moving, as in Red Heat and Total Recall, Arnold’s talents shine brighter than his reputation allows.

To be fair, that reputation is earned; Schwarzenegger’s made a lot of crap, and The Running Man is perhaps near the top of the heap. But its failures form a veritable How-To guide on using Arnold ineffectively. For one, director Paul Michael Glaser and writer Steven E. de Souza try too hard to unironically sell Schwarzenegger as an Average Joe. They give him a ridiculous looking working-guy beard and posit him as an upstanding soldier fighting a corrupt military-entertainment complex. But then they also pack the script with Arnold’s bizarre stock-in-trade, those craggily accented catchphrases that Desson Thompson perfectly described as “brawn mots.” Arnold picks up a man to throw him, but not before asking, “Give you a lift?” He murders an assassin with a flamethrower, but only after asking, “Need a light?” and later saying of the burning corpse, “What a hothead.” The Running Man is vaguely self-aware and campy, as it satirizes American television-based consumerism and our cultural lust for violence, but these line readings are brutal. They’re not played for laughs, as the equivalent moments are in Total Recall; they’re just there to please people who couldn’t stop saying “I’ll be bahck” in 1984. The Running Man fails (despite a deliciously hammy performance by Richard Dawson as the evil game show host) because it never manages to balance its preachy tone and its juvenile machismo, and because Arnold’s role is too blandly heroic to maximize his onscreen presence.

What’s interesting, watching the Terminator movies and Paul Verhoeven’s excellent Total Recall, is the delight these filmmakers takes in battering, mutilating, and otherwise undermining Schwarzenegger’s imposing form. Cameron bashes the Terminator’s face against the bumper of a Mack truck, crushes him under multiple steel beams, has him remove his own blood-spattered fake eyeball, and repeatedly peels the fake skin from his face and arms to reveal the mechanical endoskeleton underneath. In Total Recall, Arnold plays more of a normal guy, but Verhoeven still shows his eyes bulging in the Martian atmosphere, employs a close-up when Schwarzenegger pulls out a tracking device implanted in his nose, and stages a crucial action scene where Arnold’s dressed as a middle-aged woman. Schwarzenegger thrives in these kinds of scenes, where his superhuman figure is used almost as furniture. It shows a certain self-awareness and willingness for self-parody, a trait that’s furthered by the implicit explanations given for his blocky elocution. Simply put, the man’s pronunciation makes more sense when he’s asked to read as a soulless killing machine or a man trapped in a Philip K. Dick-inspired paranoid fantasy. You might sound confused or otherwise ineloquent under the circumstances, as well.

Red Heat, however, is the most surprising success of this collection. Neither terribly cheesy nor futuristic, it offers a number of characteristics seemingly meant to make "serious" moviegoers run in horror: A Schwarzenegger/Jim Belushi marquee pairing, in which Arnold plays a Russian police officer in Chicago; a sub-48 Hrs. buddy cop plot from that film’s director, Walter Hill; black and Russian ethnic stereotypes that make Law & Order look like a bastion of racial tolerance. But against the odds, Red Heat is Total Recall’s only rival in terms of quality here. It’s an excellent film, not exactly a buddy comedy but more of a gritty crime drama with impressively handled elements of comedy and cultural criticism brewing under the surface. When Arnold (who speaks most of his lines in Russian, with enough fidelity to impress this undiscerning viewer) turns on the old television in his seedy hotel room and sees a cheap porno playing, his one-word response—a disgustedly pronounced, “Capitalism”—says more about the relative crassness of American consumerism than the entirety of The Running Man. And Belushi, speaking of guys whose awful reputations precede them, is, I swear, hilarious. The supporting cast includes Laurence Fishburne, Gina Gershon, and Peter Boyle, who all do great work with the fairly unchallenging material. And Hill, a fascinating filmmaker whose other movies include The Warriors and Johnny Handsome, packs Red Heat with odd details and conversation: an opening scene of Arnold wrestling evil Russians nearly nude in the snow; a shootout in a hospital against a transvestite nurse; or Schwarzenegger’s insistance that “We’re not like American police. You ship drugs to my country and you wake up one morning and find your testicles floating in a glass of water by your bed.”

Total Recall and, to a lesser extent, the Terminator movies, prove that Arnold’s seeming un-actorliness could make for a believable sci-fi performance when matched with able directors who knew how to use him. The surprise of Red Heat is Hill’s ability to transpose Arnold’s unique presence into a more realistic setting. The key, it seems, is to keep the scenery weird enough to justify his hulking physical presence and to provide an explanation for the star’s speech patterns. So while Schwarzenegger’s legacy remains cloudy from hours and hours of lame effects-laden garbage, his best movies are indeed worth revisiting. Particularly since, barring some huge economic upswing in California, he may be returning to Hollywood within a few years. If Schwarzenegger ends up pulling off some kind of Burt-Reynolds-in-Boogie-Nights career revival, we need only look to Red Heat for proof that he had it in him all along.