The Second Coming of Dana Carvey

The short lived Dana Carvey Show was loaded with talent, criminally underrated, and is definitely worth streaming on Hulu. 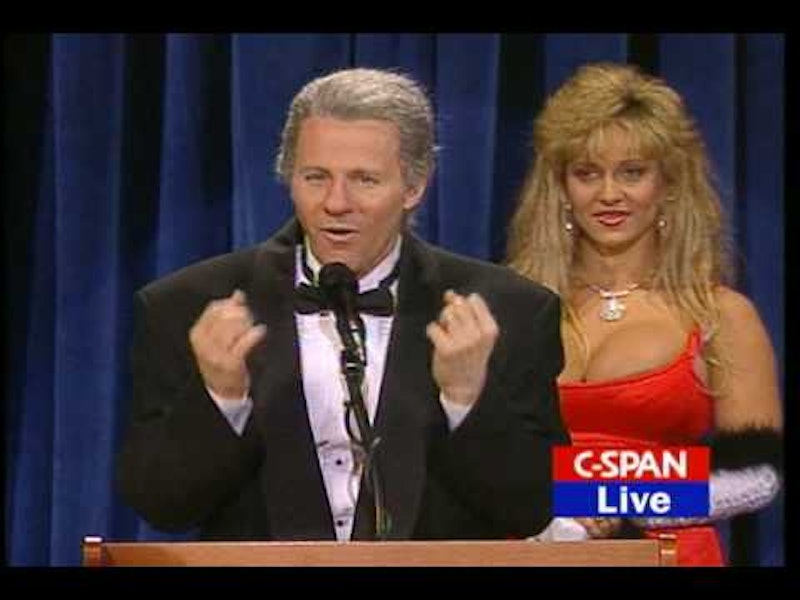 For the last few years, Dana Carvey has been a punchline, but in the wrong way. A virtuoso impressionist and cast member of Saturday Night Live, Carvey hasn’t made a movie since 2002’s The Master of Disguise, which has a remarkable two percent rating on Rotten Tomatoes. So, pity poor Dana Carvey, right? Aside from the fact that he’s probably forever grossly rich off of SNL and Wayne’s World revenue, this is no way for a brilliant comic to be treated.

Except for one thing: in 1996, Carvey ran a short-burning firecracker of a TV series, The Dana Carvey Show, that lasted all of eight 22-minute episodes before being ignominiously canceled. At an accumulated 176 minutes, that’s shorter than your typical Michael Bay film. Recently, GQ.com ran an extensive oral history with the show’s creators, including Carvey himself, but the show still hasn’t gotten nearly the credit it’s due, especially because those eight episodes are funnier and smarter than just about anything on TV right now that doesn’t involve one of its alums.

What made the series so great was its talent, which is a contemporary All-Star squad of writers and humorists. The cast included Robert Smigel, Bill Schott, Heather Morgan, and raw versions of Steve Carrell and Stephen Colbert, was produced and written by Louis C.K., and had the genius behind Being John Malkovich and Adaptation, Charlie Kaufman, in the writing room as well.

At its core, The Dana Carvey Show is sketch comedy in existential crisis. Skits grasp at absurd counter-realities, ideas that all seem prohibitively strange in concept: First Ladies as dogs, white lawyers imitating Johnny Cochran in court, two grungy dudes giving people money for goods and running off before taking what they’ve paid for. To carry such dry material, the execution has to be flawless; the cast must play the jokes either all-in or unawares, with the characters oscillating between making jokes themselves and doing everything with solemn gravity. This tension makes for skits like “The Pranksters,” where Carvey and Carrell’s slacker dudes are bursting with suppressed laughter until the end, when they explode in hysterics, and the political impressions, in which characters like Hillary Clinton and Bob Dole sport straight faces as they embody extreme caricatures of their real-life counterparts.

Which leads to the middle ground of the show, its true representative figure: Bill Clinton. Carvey impersonates Clinton, of course, and he’s styled like a bumbling, carnal Santa Claus, inadvertently doing good as he attempts to quench his insatiable desires. You get, in the first sketch of the series, Clinton breastfeeding puppies and kittens as “the nurturing President”—the skit, hilarious as it is, basically torpedoed any chances of The Dana Carvey Show surviving more than a season—and later guffawing at intentionally awful Howard Stern jokes made at the expense of his wife, flaunting his gut and thighs on Rocky-esque campaigning runs, and proclaiming his affinity for “hot, stinky sex.” Throughout the at once self-aware and unhinged paces Carvey puts Clinton through, he’s seen as giddy, cocksure, and certain of his eventual downfall—pretty much an exact metaphor for the creators and cast of the show.

In an understandable but ultimately damning move, Carvey and co. decided to give the show to ABC; it ran after Home Improvement, Tim Allen’s sitcom about family and tools and whatever. If you tried to think of a more ill-suited lead-in for the subversive, genre-bending, experimental humor of The Dana Carvey Show, you might not be able to come up with anything; those involved discuss this at length in the oral history. But who knows if that type of humor could survive in primetime no matter how well you set it up. Surveying the network comedy available today, there isn’t really anything that compares: the funniest show on network TV, Modern Family, is spectacular for its uncanny, layered resemblance to real-life, rather than the minimalist send-ups Carvey trades in. The absurdist feel of a Family Guy doesn’t compare, because where The Dana Carvey Show tended to take a scenario and twist one element, thereby subverting the rest, the miserable Family Guy traffics in randomness that ironically makes for the same shtick every episode. Maybe Arrested Development would make for the best recent parallel, with its Kafka-esque take on the family structure; I guess it shouldn’t be surprising, then, that Arrested Development was also criminally under appreciated in its time.

Successful humor takes surprising delicacy, since it’s so easy to seem like you’re trying to be the smartest guys in the room, and at this The Dana Carvey Show probably failed. But when you are the smartest guys in the room, and you create material that proves it, you’ll inevitably attract your fair share of detractors. For this reason and others, the Internet is a panacea for many problems of comedy, allowing the esoterically funny to whittle out their own little cubbyholes and not bother those who would prefer to stick with Two and a Half Men and reruns of Friends. With every episode of The Dana Carvey Show ever made available to stream for free on Hulu.com, you have no excuse not to give it a look if you’re interested in smart comedy.