The Norwegian film Trollhunter is like Blair Witch Project meets This is Spinal Tap, but somethings been lost in translation. 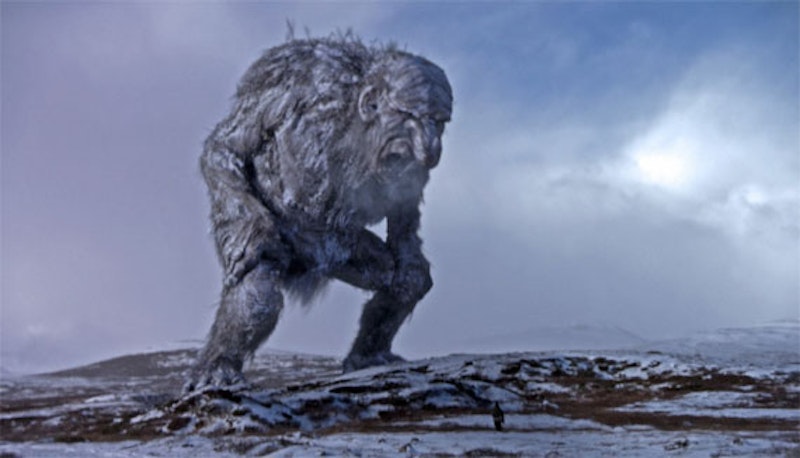 Imagine if the Blair Witch Project was crossed with This Is Spinal Tap. Now set it in Norway with trolls—and you’ve got Trollhunter.

You may ask, do we need another Blair Witch knock-off? Do we need another Spinal Tap knockoff? Even together? Even in Norway? And the answer to all of your questions would be no, not really. Like the trolls it purports to document, the film’s existence is both superfluous and kind of ridiculous.

That’s not to say that the film is bad, exactly. Just that there’s something oddly mysterious in its unmotivated lumbering.

It’s possible something crucial has been lost in the translation from the Norwegian. Or, alternatively, Trollhunter may suffer from excess of appetite. The eponymous government troll hunter Hans (Otto Jesperson), in one of his many quirky troll anecdotes, discusses a troll he saw who was so dumb it tried to eat its own tail. The movie itself seems to miss the mark in a similar way. It tries to be comedy; tries to be horror; staggers back and forth a little and then, getting into the swing of it, settles for just roaring a lot and knocking things over.

The dilemma is perhaps best summed up during what’s supposed to be an emotional highpoint; the death of one of the teenage main characters three-quarters of the way through the film. The protagonists and Hans are trapped in a cave with marauding trolls. The doomed kid (the cameraman), in a panic, frantically rubs disgusting troll stink all over himself, hoping to hide his scent. Unfortunately, though, he is, as it turns out, a Christian, which means that the trolls can smell him. Shortly thereafter, he’s eaten, leaving his companions to wail at the uncaring heavens, “Why didn’t he just say he was a Christian!”

So that’s the joke, and it’s moderately funny in a ha-ha-we’re-all-atheists-here kind of way. It could almost be a really low-key Monty Python sketch—except that up to this moment, the dead character has been treated as an actual person, rather than a goofy gag line. Not that there’s a ton of character development or anything, but for purposes of the previous horror-movie-running-away-and-screaming, there’s been at least some effort to pretend that what happens to this guy matters. And then, all of a sudden, he’s just thrown away. And then you see everyone else grieve for a minute or so… and then they stop, and get a replacement cameraperson (who’s a Muslim, so trolls probably can’t smell her—only Christians, not Muslims. Get it?) The whole thing just ends up being not just crass, but unbelievable. This kid just died; there’s no investigation? No explanation to the police? The other teenagers don’t stop and say, you know, our friend just died; screw the trolls, I’m headed home?

Instead, on they go, trundling from set piece to dry-humored set piece. Hans dresses in armor to fight a troll; Hans explains that the trolls’ extra heads are just growths designed to impress other males and attract females; Hans talks about the trauma of killing troll infants; a veterinarian explains the improbable biology of trolls turning to stone when sunrise hits them. It’s amusing enough, and the trolls themselves, as special effects, are goofily effective. Over the entire film, though, the archness becomes tedious. The Last Exorcism, with its hand-held camera horror, was not a great movie, but it cared about its main character, about its genre, and about the story it had to tell. This Is Spinal Tap was a goof, but it clearly had great affection for the hapless band it parodied. Trollhunter, in comparison, has no real characters, no real story, no real point—just extended snickering and occasional enjoyable special effects.

In a way, it makes you hope for the inevitable English-language remake. If somebody cares enough about the thing to purchase the rights, maybe they’ll care enough to give the film some kind of direction. Laughing at the trolls is all right in limited doses, but if this is going to work, someone out there needs to love them a little as well.