The Old Internet Is New Again

If I Can Dream and Chatroulette take us back to 1998 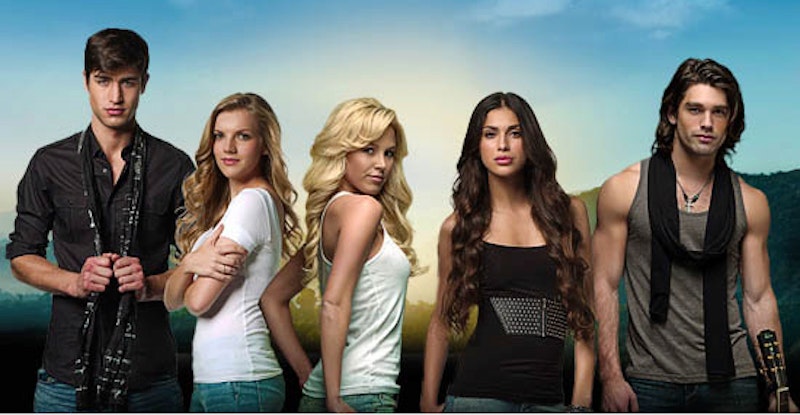 Does anyone remember Jennifer Ringley and Sean Patrick? Over 10 years ago, tens of thousands of Americans brought The Truman Show to reality by broadcasting themselves live for anyone to see. Webcams, people forget (especially people my age), were the original web videos. JenniCam and Sean Patrick Live drew thousands of viewers and became one-person brands long before Fred and Ryan Higa. Webcams were low-res and low-energy, but they were voyeurism incarnate.

You know the Internet is old when it starts to repeat itself. Tuesday, producer Simon Fuller brought to the Internet the live show If I Can Dream, following five unrealistically attractive men and women in a beautiful Los Angeles mansion, each one trying to "make it" in various entertainment and lifestyle-focused industries. It'll take 56 cameras, a lot of rules and a 30-minute episode edited every week, but the series hopes to be a viral hit. It's pitching itself as a novelty.

But If I Can Dream isn't new. It's just one of a host of new websites and series from over the last three or four years aiming to bring back the ol' Internet: live video, webcamming and unabashed voyeurism.

The most publicized has been Chatroulette, which has been around since 2009 but received major buzz when New York exposed it to the over-30 set, to much press attention—I know something has been hyped when even I have been asked to comment. As New York notes, Chatroulette is a new twist on old concept: the live webcam site. What Chatroulette does is add randomness and anonymity, though these two things were never really missing from original. Needless to say, Chatroulette is an extreme concept. What our fascination with it shows is how much we miss the chaos lost in our logical, Googled, Facebooked web.

Long before Chatroulette, live streaming sites became popular, corporate and social networked spaces. Justin.tv draws millions every month. UStream.tv, Blogtv.com and Stickam have similarly been steady, with the former becoming quite popular of late. YouTube and other video hosts are in the business of live as well; and as bandwidths go up, so does viewership. Live broadcasting has moved beyond the domain of stay-at-home narcissists. Awards ceremonies and live events are regularly streamed. Most interestingly, YouTube stars and web series creators have been using live streaming to augment their brands and solidify audiences (leading them to ad-hosting sites and videos).

If I Can Dream is merely the latest—albeit better-funded—effort at using live streaming and mixing it with tried and true genres. It's a cross between the fame-focused American Idol, petty drama-peddling Real World, and navel-gazing America's Next Top Model. Live!

Will this be successful? I'm not sure. Certainly it's still hard to make money in web video. Individual successes abound, but considering YouTube still is not profitable and hundreds of well-funded web series go unnoticed, predicting a hit online is much more difficult than on television.

Employing hot young people is surely a good start. If nothing else, sex sells online, perhaps more so than on television or film. Quarterlife producer Marshall Herskovitz has mentioned numerous times how photographs of his star Bitsie Tulloch led to easy increases in views. Web entrepreneur Scott Zakarin (The Spot, Roommates) has been using girlfriend-cute leading ladies for over a decade. The top vloggers on YouTube are one of three things: really funny, really talented or really hot.

I wonder if anyone has time anymore to wait for something to happen live. There are too many websites to visit. In this regard, the weekly wrap-up episodes are a good idea. If you solve the "live" problem, the issue becomes penetration. If nobody is talking about it, nobody will watch. What kinds of ridiculous hijinks, heated arguments and emotional breakdowns will the show's producers coax our blessed beauties into? It won't matter if they're blogging, tweeting or vlogging for nine hours a day. If our models and actors aren't interesting, we won't watch. However much the Internet changes—or repeats itself—this much will stay always the same.