Life on the Outside Ain’t What it Used To Be 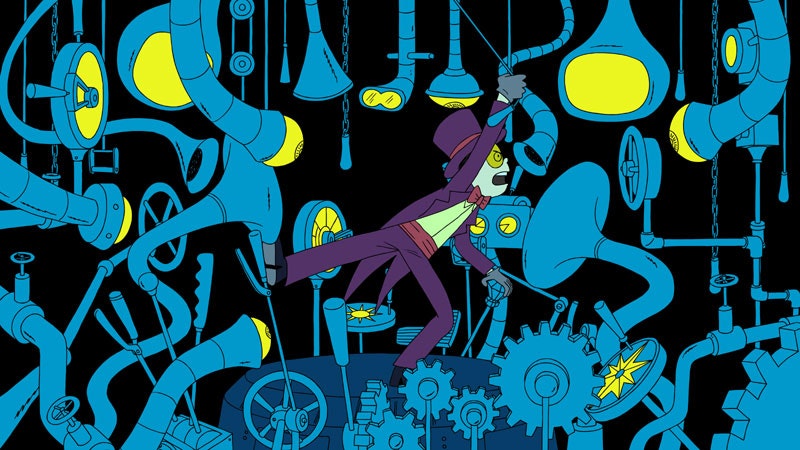 I remember watching MTV’s Liquid Television late at night, with my friend Neil, up past our bedtimes and anticipating a headache haze the next day. We were 11 or 12, in the early 1990s. Liquid Television gave us something entirely new, illicit and dreamlike. Its constituent cartoons (Aeon Flux, Beavis and Butt-head and other less famous offerings) did things that our ordinary daytime cartoons would never have dared. Before sundown we watched classic Looney Tunes and their sanitized Tiny Toon Adventures descendent. We idly viewed Nickelodeon’s foreign and domestic fare (Doug, David the Gnome, a show about magical koala bears that I have never satisfactorily tracked down—it may be Noozles). These entertained us but they did not challenge our lives or our aesthetics.

Liquid Television threatened us. It had an air, as I wrote above, of dreamlike mystery—Neil and I were never quite sure if what we were seeing was real. Could they really do that? Could they really show that? Beavis and Butt-head didn’t provide too many challenges (though it did carry the thrill of something forbidden, or at least morally bad), but the early, non-narrative episodes of Aeon Flux confused and electrified us. Aeon, the protagonist, was emaciated and sexualized, but recognizably human, yet in most of the original shorts she died, and not in a cute cartoon way, but in spectacular bursts of blood. There was almost no dialogue and the plot and setting were sketched with nightmarish vagueness. It was a far cry from even the most outré childrens’ cartoons. The style of storytelling knew when to omit explanation and when to spend its thin plot and character in explosions of gore; it was sophisticated if not exactly grown up.

I re-experienced that feeling last year when I first saw Superjail on Cartoon Network’s Adult Swim website. Adult Swim has built a cottage industry of bizarre cartoons, most of which cater to the stereotypical stoned college crowd. Superjail, which came out on DVD in late February, certainly offers plenty of fodder for the late-night altered state consumer, but it also brings back a sense of playful, vicious unexpectedness that even the Dadaist plots of Aqua Teen Hunger Force and Sealab 2021 can’t match.

In fact, Superjail is so weird that I was surprised it got a DVD release at all (I ran across the DVD in Target, the most banal venue imaginable). The DVD version improves vastly on the grainy streaming video of the website, which is a huge boon for Superjail since the series turns on its art. Superjail takes place in a fictional prison run by a Willy Wonka-esque warden, a sexually ambiguous corrections officer named Alice, a hydrocephalic dwarf accountant (Jared) and an indiscriminately violent robot, called Jailbot. The jail features many bizarre facilities, the inmates appear in endless interchangeable profusion and the Warden exercises powers both mechanical and metaphysical. Horrific violence abounds. The characters are voiced and animated with such cheerful excess that the wackiness actually works—it rarely feels like the creators are being weird for weird’s sake, even though they’re almost always extremely weird.

The characters show charm if not depth. The Warden is whimsical, callous and capricious but not actually malevolent. He also acts with a sweet insecurity, and pines after Alice (whose prominent Adam’s apple and oddly bulging package he ignores). Alice, probably the series’ funniest character, finds only the toughest and most depraved criminals attractive and stays quiet except for a few pithy one-liners—in the season finale she, Jared and the Warden return to Superjail after a long absence to find the inmates degenerated into a race of primitive bird men. “What’s gotten into these inmates?” wonders the Warden, to which Alice responds laconically, “a whole lot of bird dick from the looks of it.” Jared plays the straight man, more or less, though the rules and regulations of Superjail seem so elastic that his complaints about the budget lack urgency. Alice and the Warden mistreat him, and he turns to booze and compulsive eating to deal with his stress. The Jailbot has an expressive face composed of just a few pixels, and the series’ villains, the Twins, look and sound like refugees from a Kraftwerk video and use their infinite powers to frustrate the Warden’s plans.

All of this sounds silly on paper, but the show’s excellent, challenging art direction redeems any shortcomings of character and plot. Superjail draws from Yellow Submarine, heavy metal, Ren and Stimpy, the artwork of R. Crumb and various other psychedelic sources. The animators use a vibrant, colorful, incredibly busy palette. They excel at cleanly drawn characters and at completely frenzied set pieces in which hundreds of figures clash against surreal backgrounds. In the first episode, part of Superjail floods and Alice fights a squid whose ink tints the entire screen black, leaving the action to take place in neon outline against the blank screen—similarly inventive scenes take place in most episodes. Grotesque machines, horrific personal transformations, purulent gore and fantastical architecture all glow with the same manic energy. Tiny details flash by in a trice. Many Adult Swim shows use their art as a minimal placeholder, letting ludicrous plots and hipster banter carry the action—Aqua Teen Hunger Force, Sealab 2021, and Home Movies come to mind. Superjail makes the art central to the action. The series is worth checking out. Even during the day it carries the late-night haze of something secret and inexplicable.