The Good Way to Make a Bad Movie

Year One doesn’t have a lot going for it, but it’s easy to forgive Harold Ramis. (Grade: C) 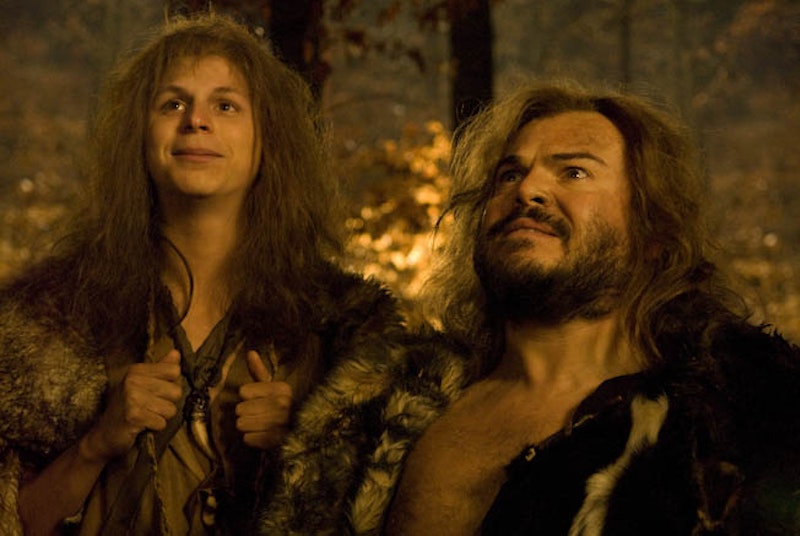 If the image of Jack Black and Michael Cera dressed as Stone Age hunter-gatherers doesn’t make you laugh reflexively, I’m afraid there’s not much for you to see here. From the looks of it, most of Year One’s budget went to the costume department, perhaps to dress up a script which comes across like it was written in about 15 minutes. As Black and Cera, playing two tribal outcasts named Zed and Oh, leave their village and venture out into the early-Christian world, they encounter a number of hilariously outfitted Biblical characters that never turn out to be as funny as initial glimpses promise. Hank Azaria, as Abraham, has a wicked beard to match his demented eyes, and a short monologue about his new idea, circumcision, that is the funniest moment in the movie. David Cross, as evidenced by Mr. Show and Arrested Development, looks funny in just about any costume he wears, but his cynical, opportunistic Cain is, like most of Year One’s roles, a single joke masquerading as a character. You keep wanting these people to be funnier, to follow through on the premise, and yet Year One continuously falls back on scatology and sexual embarrassment for yuks. Some of it’s funny, granted, but surely all the talent here could have come up with some more biting satire.

So no, Year One isn’t good, but it’s a fine lesson to how to make a bad movie. It’s written and directed by Harold Ramis, who, as a principal creative mind behind Ghostbusters, Stripes, Caddyshack, and, most importantly, Groundhog Day, has made some of the most likeable, not to mention successful, comedies of the last 30 years. This is not a man who strives to shock or offend people, so even though a number of key moments in Year One involve Black eating poop and Cera peeing all over his own face, it has an oddly quaint charm. Ramis’ classic Murray-era movies are meant to elicit laughs from the first to last frames, and Year One has that same adolescent eagerness to please. It could be more effortful, but it doesn’t reveal weaknesses in the director’s older work or seem like the product of dubious moralizing like some bad movies do. It’s just a mediocre comedy, and there are worse crimes.

In the tradition of Mel Brooks’ A History of the World, Pt. 1 and Monty Python and the Holy Grail, the plot isn’t really the point of Year One. Ramis and company get considerable mileage out of the obvious jokes in their premise, mainly the sight of two contemporary-talking guys eeking out their existences amid Stone Age morality and social custom. So you have Zed and Oh bickering early on about how to best have sex with a girl they like, and the conversation ends when Zed tells his friend to dance with her and then hit her with a club and drag her to his cave. Broadly speaking, there’s an allegory in the film’s structure—Zed and Oh’s journey constitutes a general tour of man’s ascent from tribalism to more contemporary social and religious order—but let’s not get ahead of ourselves. Underneath the anthropological surface, Year One is a typical Ramis ensemble concept comedy where most of the humor stems from the main characters’ attempts to get laid.

Year One disappoints because, ironically, it’s not as insightful as Ramis’ best comedies. Despite a premise worthy of Monty Python, it seems content to merely nudge religion rather than satirize it outright. Oliver Platt, wearing a series of outrageous crowns and robes to complement his salacious eyeliner, plays a high priest in Sodom with an appropriately astronomic level of camp. But the character barely has room to breathe underneath the repetitive burble of gay jokes; Cera is forced to massage oil into the priest’s hirsute chest, which feels uncomfortable close to a Fat Bastard scene out of The Spy Who Shagged Me. It goes without saying that Groundhog Day found oceanic depths under its silly premise, but even Ghostbusters, Stripes, Meatballs and Caddyshack work well because their ridiculous characters are grounded by recognizable satires of class structure, mass culture, and the military. It ain’t Buñuel, but these movies don’t aim to be. Year One’s satire, meanwhile, barely moves beyond clothing.

Or, to put it a different way: in Caddyshack’s famous poop-eating scene, the joke is on the rich woman who faints at the sight of Bill Murray fishing a Baby Ruth out of the pool. In Year One, Jack Black just picks up some actual poop and eats it. The proof is in the pudding, like always.