The bizarre world of Trash Humpers 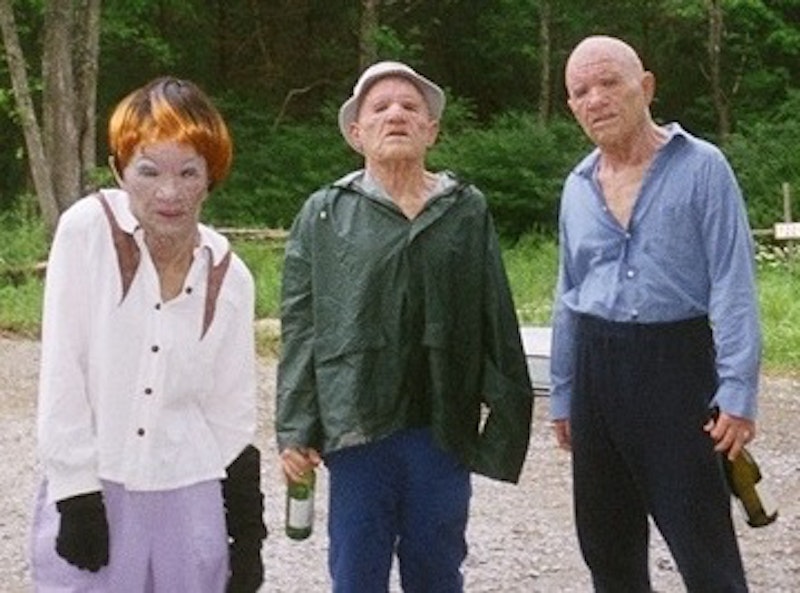 Harmony Korine’s latest production is widely, and correctly, considered something less than a film. Korine intended it more like “a VHS tape that was in some attic or buried in some ditch,” as he wrote in a press release. Trash Humpers inhabits a crusty, stale, rotten America. The grotesque beings of the film’s title are four elderly people—played by Korine, his wife Rachel, and two others, all wearing masks—who trudge around fields, parking lots and construction parks, primarily humping trashcans. They also laugh giddily, break televisions, look into people’s windows, and throw fluorescent lights into the air, rapidly tap-dancing as they fall.

The style of Trash Humpers feels like the childish, friends-fucking-around parts of Jackass; the geriatrics film and perform for each other, breaking things and rubbing their genitals onto objects. They have strange obsessions, beyond just humping trash; they carry around dolls and play endlessly with thrift-store sound-generating toys. They grunt and laugh emptily, and don’t exchange many words, other than certain obsessive chants, like: “Make it, make it, don’t break it!”

The Humpers spend time with other people, more human looking characters without masks. Although at first they appear to be friends, it’s soon obvious they’re more like the Humpers’ entertainers. These are middle-aged men, some showing signs of psychosis, who play music and perform stand-up comedy. The Humpers are sometimes doubled over in laughter at the antics, sometimes rapt, sometimes asleep. The stand-up jokes and monologues are filthy, bigoted, and don’t really make sense, but the Humpers love the entertainment.

It’s all filmed on a VHS camcorder, with analog “PLAY” and “REW” cues left in. This has a wide range of effects: sometimes the crude colors are solid looking, making the Humpers—in their masks and magenta pants—look cartoonlike. At other moments, lurid colors of streetlights and sunsets blend colors together, making certain shots inscrutable.

One question, considering Korine’s other work, is whether there’s really any drama in Trash Humpers. This was central in Julien Donkey-Boy; despite its lack of narrative, its scattered depiction of a dysfunctional family—whose father is played by Werner Herzog—is flush with emotion. Through a conveyance of fragmented, tattered consciousness, Julien Donkey-Boy imparts real sympathy with the schizophrenic Julien (Ewan Bremmer) and his sister Pearl (Chloë Sevigny) who carries his baby, making us feel close to them and their attempts at living. Korine’s most provocative film, Gummo, although less humanistic than Julien, evokes a lot of sympathy, or at least pity, with its carnival of backwater characters.

In Trash Humpers, the drama is elusive. In the film’s first half, the characters’ freewheeling, violent abandon is jarring in its mindlessness. They behave like subhuman automata, laughing deliriously at their tactile experience. And, on top of this, there doesn’t really seem to be anything guiding the film along; the cuts are random, flat and devoid of meaning.

But as the film progresses, an overwhelming strangeness sets in. It becomes clear that the world of Trash Humpers, though filmed in Nashville, is not quite our world; this is a nightmare America. There are moments of quiet and violent poetry here— shots of corpses and absent parking lots— and the film’s dramatic weight lies in its strangeness. Although it’s impossible to identify with these insane creatures of the title, the film is affecting in that it evokes a strong repulsion, otherworldliness with a faint hint of familiarity for anyone living in America.

Korine’s attempted conceit of creating a film without a filmmaker is difficult and hardly believable, yet the idea of a film found in a ditch is compelling, because we’re not confronted with supposed social “realities” anymore, as in Gummo. In Trash Humpers, we’re being shown incomprehensible violence. Korine’s idea is to present the film as emerging from the violence itself, the American violence, and not from the mind of a privileged artist. As a result, the film’s implacable and unique madness makes it a qualified success.