Rage Against the Doctors 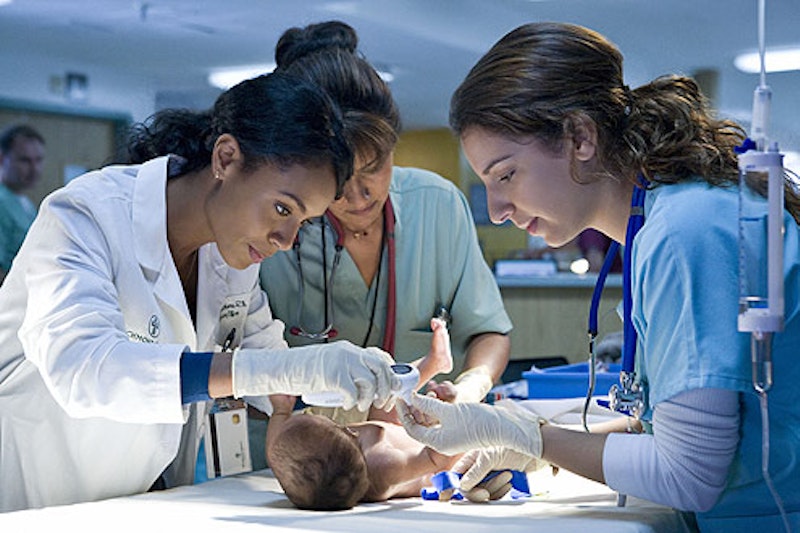 Americans hate journalists and bankers. As a journalist whose best friend is a banker, this sometimes gets under my skin. But it makes perfect sense, and far be it for me to begrudge someone their hate.

Medical professionals, on the other hand, get lots of respect. Nurses, according to some polls, are the most beloved of our nation's workers. They are caring and make us feel better but don't make the controversial calls or handle the billing. Doctors are highly rated too, but if you've been watching cable television this summer, you might not think so.

At least three shows, all breakout hits, explore how doctors and hospitals are terrible for healthcare, while nurses can do no—or very little—wrong. ER and Grey's Anatomy these are not. No wonder cable is so hot right now.

Nurse Jackie, my favorite of the shows, follows the travails of Jackie (Edie Falco), a nurse who always knows better. Falco's Jackie is crusty on the outside and soft on the inside, like the best of pastries. She abuses prescription drugs and cheats on her husband, but she is also an attentive mother, and, most importantly, very caring toward her patients, almost maternally so. She knows what to do before the doctors do. Meanwhile, the doctors are either childish pricks (Peter Facinelli's Dr. Cooper) or overprivileged ice queens (Eve Best's Dr. Elenor O'Hara). If they're right, they are cold and uncaring to their patients; and then of course, they are wrong sometimes too. Right or wrong, they are jerks to the nice nurses. It's a fun show, made better by the casting of super sexy Haaz Sleiman as a gay nurse.

The anti-doctor motif is a solid formula for Nurse Jackie, which Showtime has already renewed, making it another strong addition to the channel's already solid lineup.

Another breakout is HawthoRNe, Jada Pinkett-Smith's comeback show about another nurse, Christina Hawthorne, who is similarly amazing at her job. Like Jackie, Christina has a fatal flaw: a mistake she made caused her husband’s death. HawthoRNe plays with the familiar themes; doctors are off playing golf instead of helping patients or make the wrong calls and then blame the nurses. The hospital bureaucracy blames nurses first and doctors later, meaning Christina's job is harder to do and less prestigious. Less edgy than Nurse Jackie, HawthoRNe is less fun, an awkward compromise between network (think ER) and pay-cable aesthetics.

Yet by far this summer's most surprising hit is Royal Pains, USA's Mark Feuerstein starrer about an accomplished emergency room doctor fired for letting a billionaire hospital trustee die while saving a no-name black kid. A doctor we like, you wonder? Yes, we do like Feuerstein's Hank Lawson, but only because he works outside the hospital system. Despite treating insanely rich Hamptons clients, Hank is noble because he has cut out the bureaucracy and the politics, getting to the heart of the problem without long lines or red tape. His helpful associate, a super-nurse played by Reshma Shetty, is equally lovable and capable.

Why all the hate for doctors and hospitals? Cable networks simply got lucky and hit the right note at the right time. In our current healthcare battle, doctors are fast becoming arch enemies. Most Americans are in favor of a government-run healthcare plan, but the American Medical Association, because doctors get less money for government patients, are vigorous opponents and have been for decades. It's the kind of self-interest that puts doctors in league with drug companies, which fear the government using its buying power to purchase drugs at lower prices, and insurers, which fear the loss of business if people flock to a public option. Already, stories are surfacing of doctors over-treating not only to protect their backsides but also to make more money. In a recent New Yorker article, Atul Gawande wrote that hospitals "know that if their doctors bring in enough business—surgery, imaging, home-nursing referrals—they make money; and if they get the doctors to bring in more, they make more." It gets worse: "Then there are the physicians who see their practice primarily as a revenue stream...They figure out ways to increase their high-margin work and decrease their low-margin work. This is a business, after all."

In this context the stunning successes of HawthoRNe, Royal Pains and Nurse Jackie make sense. Divorced from the revenue stream, nurses and independent doctors seem altruistic. It's no surprise most nurses' associations support either a single-payer or some other public healthcare option.

The lesson? Maybe this summer Congress should be watching more cable TV.